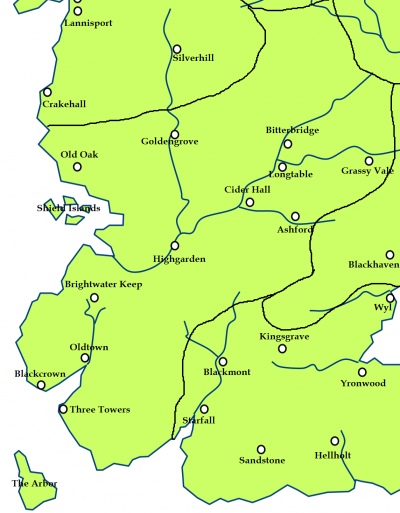 Highgarden
The Reach and the location of Highgarden

Highgarden is a castle which serves as the seat of House Tyrell, the regional capital of the Reach, and the heart of chivalry in the Seven Kingdoms. It lies on the Mander where the ocean road meets the roseroad, making it an important crossroads.[1]

Mace Tyrell is the Lord of Highgarden. The castle's household includes Lord Seneschal Garth Tyrell, Maester Lomys, the master-at-arms Ser Vortimer Crane, and the fool Butterbumps.[2] Igon Vyrwel is the captain of the castle guards.[2]

Highgarden is located on a broad verdant hill overlooking the Mander. The castle is surrounded by three rings of white stone whose crenellated curtain walls increase in height. Between the outer and middle walls is a famous briar labyrinth which serves to entertain as well as slow invaders.[3] The oldest towers, squat and square, date from the Age of Heroes. Newer towers are tall and slender,[3] round fortifications dating from after the coming of the Andals.[4]

The castle sept, which has rows of stained-glass windows honoring Garth Greenhand and the Seven, is matched only by the Great Sept of Baelor and the Starry Sept. The castle's godswood contains three weirwoods known as the Three Singers. The palatial keep is decorated with statues and colonnades. Also within Highgarden's walls are groves, fountains, and courtyards. The castle's structures are covered in ivy, grapes, and climbing roses.[3]

Highgarden is filled with flowers, singers, pipers, fiddlers and harpers. The stables have a fine selection of horseflesh, and there are pleasure boats to sail along the Mander.[5] There are fields of golden roses that stretch as far as the eye can see. Fruits grown nearby include melons, peaches, and fireplums.[6] 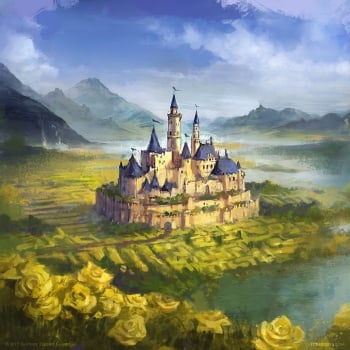 Highgarden is said to have been built by Garth the Gardener atop a hill overlooking the Mander.[7] Highgarden was the center of the Reach proper, and the Kings of the Reach from House Gardener grew to acquire what has become the Reach.[8] Many members of House Peake served as counselors at Highgarden.[9]

During the Andal invasion of Westeros, King Mern II Gardener built a curtain wall about the castle. The Andals were ultimately welcomed into the Reach, however, and King Garth IX Gardener built the first sept at Highgarden, although he continued to worship in its godswood. House Tyrell, a family of Andal origin, became the hereditary stewards of the castle.[10]

Highgarden was sacked by Dornishmen during the reign of King Garth X Gardener, and the Gardeners' Oakenseat was destroyed. The castle was rebuilt by Garth's cousin, King Mern VI Gardener.[10]

The peaceful Harmund II Hoare, King of the Iron Islands, once visited Highgarden and Oldtown.[11]

The Gardener kings hosted tourneys of love and beauty, and the greatest champions were allowed to join the Order of the Green Hand.[3]

Highgarden was the seat of House Gardener until Aegon the Conqueror defeated King Mern IX Gardener and his host on the Field of Fire, ending their line during Aegon's Conquest. When Aegon then marched his host to Highgarden, its steward, Harlen Tyrell, surrendered the castle without a fight. For this, Aegon granted him the castle and gave House Tyrell dominion over the Reach as the Lord Paramount of the Mander.[12][13] However, other houses, such as the Florents, Rowans, and Oakhearts, also claim blood ties to the Gardeners and covet Highgarden.[5] During the First Dornish War, Aegon I took counsel at Highgarden with Lord Theo Tyrell.[14]

Aegon visited Highgarden during many of his royal progresses.[15] When Aegon died at Dragonstone in 37 AC, his eldest son flew from Highgarden, which he had been visiting as part of a progress, to Dragonstone to be crowned King Aenys I Targaryen.[16] The new king visited Highgarden after being anointed at the Starry Sept of Oldtown.[16] After Elinor Costayne was forced to wed King Maegor I Targaryen, her second son was sent to Highgarden for fostering.[16]

After his coronation in Oldtown, the court of King Jaehaerys I Targaryen stopped at Highgarden while returning to King's Landing.[17] In his youth, Septon Barth served at Highgarden before coming to court.[18] After the passing of the High Lickspittle, Jaehaerys and Queen Alysanne Targaryen stopped at the castle while flying to Oldtown.[19] Rhaena visited the Tyrell seat during her search for her daughter, Princess Aerea Targaryen.[20]

Florence Fossoway ably kept the accounts at Highgarden for her husband, Lord Martyn Tyrell.[21] The Tyrells hosted the famed Tourney of the Field of Roses during the reign of the Old King.[3] Jaehaerys and his granddaughter, Princess Rhaenys, visited Highgarden in 89 AC.[21]

After the passing of King Viserys I Targaryen, the green council sent ravens to Highgarden asking for House Tyrell to support King Aegon II Targaryen.[22] Many lords of the Reach declared for Rhaenyra Targaryen, however, and the regents for young Lord Lyonel Tyrell decided that Highgarden should not take part in the Dance of the Dragons.[23]

Because the Tyrells were neutral, Ser Ulf White declared after the First Battle of Tumbleton that they should be attainted as traitors and he should receive Highgarden.[24] He was poisoned after Second Tumbleton, however.[25]

Highgarden was slow to answer Aegon II after his restoration to the Iron Throne.[26] Young Lord Lyonel Hightower wanted to support Aegon, but he was dissuaded from doing by the Tyrells, his liege lords. Lord Hightower's younger brother, Garmund Hightower, was a page and companion to Lord Tyrell at Highgarden, so declaring for Aegon would put Garmund's life in danger.[27]

While a squire to Arlan of Pennytree, Ser Duncan the Tall once served at Highgarden, where he met Leo Longthorn.[28] Prince Daeron Targaryen squired at Highgarden with Jeremy Norridge.[29] 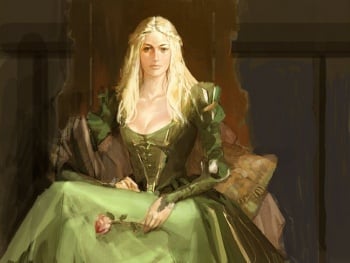 An envoy of Highgarden - by Sedone Thongvilay © Fantasy Flight Games

Following the death of King Robert I Baratheon, his younger brother Renly Baratheon and Ser Loras Tyrell flee from King's Landing to Highgarden.[32] Renly weds Loras's sister, Margaery, at Highgarden and claims the Iron Throne with the support of House Tyrell. Lord Mace Tyrell calls the banners to Highgarden.[33]

Brienne of Tarth travels to Highgarden,[34] where she is falsely courted by some of Renly's men.[35] Renly marches from Highgarden on the roseroad toward King's Landing,[36] but he diverts at Bitterbridge for Storm's End.[37] Mace remains at Highgarden with ten thousand reinforcements.[37]

During the parley at Storm's End, Renly offers his brother Stannis a peach from Highgarden.[38] After the death of Renly, the Tyrells do not follow Stannis. Lord Petyr Baelish travels to Bitterbridge[39] and then Highgarden, where he meets Mace and Lady Olenna Tyrell.[40] Petyr negotiates an alliance between the Tyrells and the Lannisters, with the widowed Margaery agreeing to marry King Joffrey I Baratheon.[41]

Mace's men prove decisive in the Battle of the Blackwater.[41] The Tyrells in King's Landing send for Margaery, who had returned to Highgarden from Bitterbridge.[41]

After having caused famine in King's Landing by closing the roseroad while supporting Renly,[42] the Tyrells send carts of food from Higharden to the royal capital and are thus beloved by the Kingslanders.[43] Many of the Tyrells travel to King's Landing, but Willas Tyrell, Mace's heir, remains at Highgarden.[5]

The Tyrells plot to marry Sansa Stark to Willas,[44] but the Lannisters instead engineer Sansa's marriage to Tyrion Lannister.[45]

After Joffrey's death, Littlefinger reveals to Sansa that while he was at Highgarden negotiating with Mace and Olenna, he ordered his men to spread disturbing tales of Joffrey to discredit the boy king. Petyr's men also bribed Highgarden's musicians into singing songs of the Kingsguard, thereby influencing Loras into joining the knightly order.[40]

Ser Garlan Tyrell takes half the Tyrell strength back to Highgarden,[46] and Lady Olenna Tyrell returns as well.[47] After the taking of the Shields by the ironborn, Lord Osbert Serry flees to Highgarden. Garlan begins to gather men from across the Reach to retake the islands.[48]

Laswell Peake tells Aegon Targaryen that the power of Highgarden may not be what Lord Mace Tyrell imagines, as some members of the Golden Company still have friends in the Reach.[49]

Since the Tyrells are occupied with the ironborn and politics in King's Landing, Obara Sand wants the Dornishmen to attack the Reach.[50]

You need to come south. You need a taste of summer before it flees. In Highgarden there are fields of golden roses that stretch away as far as the eye can see. The fruits are so ripe they explode in your mouth—melons, peaches, fireplums, you've never tasted such sweetness.[6]

Renly Baratheon is nothing to me, nor Stannis neither. Why should they rule over me and mine, from some flowery seat in Highgarden or Dorne?[51]

The war had not touched the fabled bounty of Highgarden.[37]

The roses support the lion, as the might of Highgarden supports the realm.[41]

—Joffrey I Baratheon to Mace Tyrell

At Highgarden we have many spiders amongst the flowers. So long as they keep to themselves we let them spin their little webs, but if they get underfoot we step on them.[5]

You will love Highgarden as I do, I know it. Once you see it, you'll never want to leave.[5]

Centuries of blood and war lay between Sunspear and Highgarden.[52]