Ser Hosteen Frey is a knight of House Frey, the sixth son of Lord Walder Frey, the first one born of his third wife, Amarei Crakehall. He is married to Bellena Hawick.[2]

Hosteen is a husky man with a square face.[3] He is brawny, on account of his Crakehall ancestry, with a jut of jaw and arms thick with muscle. He is compared to a bull, slow to anger but implacable when aroused.[4] Hosteen is a seasoned soldier and the fiercest fighter of Walder's brood.[4] While he favors his mother's family and is considered the strongest of all the Freys,[3] Stannis Baratheon judges him to be dim and stupid.[5]

Ser Hosteen participated in the tourney at Lannisport, which was held to celebrate King Robert I Baratheon's victory over Greyjoy's Rebellion. He was defeated by the eventual champion, Ser Jorah Mormont.[6] Hosteen rode in the tourney on Prince Joffrey's name day in 298 AC, but he was unhorsed by Ser Loras Tyrell.[7]

Hosteen attends the Hand's tourney in King's Landing with five of his brothers.[8] He is at the Twins when Catelyn Stark informs her son, Robb, of the alliance negotiated with Lord Walder Frey.[7]

Hosteen is captured by House Lannister,[2] presumably during the battle on the Green Fork. Arya Stark observes four Freys being ransomed at Harrenhal.[9]

Hosteen is later a member of the Frey contingent commanded by Ser Aenys Frey and Lord Roose Bolton at Harrenhal. He claims to have been captured by Lord Tywin Lannister once.[3] 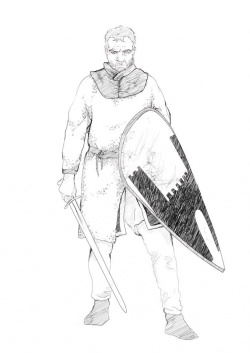 Ser Hosteen is among the Freys that meet Ser Jaime Lannister when he arrives at Harrenhal with the Brave Companions. Hosteen is introduced to Catelyn Stark at the Twins on the eve of Lord Edmure Tully's wedding to Roslin Frey.[10] During the Red Wedding Hosteen kills Lucas Blackwood.[11]

Aenys and Hosteen command the two thousand Frey swords that are sent with Lord Bolton to retake the north.[12]

Hosteen and Aenys are present at the wedding of Ramsay Bolton to "Arya Stark", who is actually Jeyne Poole, at Winterfell.[13] In the worsening cold, he loses an ear to frostbite. When several men-at-arms are murdered Hosteen at first suspects Theon Greyjoy but later suspects Lord Wyman Manderly of ordering the deaths. Ser Jared Frey, Symond Frey and Rhaegar Frey went to White Harbor to treat with Wyman and have not been seen since, to which Hosteen suspects foul play. When Little Walder Frey is found dead at the First Keep, Hosteen accuses Lord Manderly, who denies the charge while insulting House Frey. This enrages Hosteen, who attacks Wyman and would have killed him if not for the intervention of White Harbor knights.[14]

In order to prevent a battle inside the castle between his own army, Roose Bolton sends Hosteen and Aenys in the vanguard to attack Stannis Baratheon's army.[14]

The Frey vanguard falls into a pit trap set by Mors Umber. Aenys is killed, placing Hosteen, whom Stannis refers to as "Ser Stupid", in command of the Frey force sent to battle Stannis.[5]

Wyman: White Harbor does not fear to ride with you, Ser Hosteen. Lead us out, and my knights will ride behind you.
Hosteen: Close enough to drive a lance through my back, aye. Where are my kin, Manderly? Tell me that.[15]

Angry foes do not concern me. Anger makes men stupid, and Hosteen Frey was stupid to begin with, if half of what I have heard of him is true. Let him come.[5]