House Condon is a noble house from the north. According to semi-canon sources they blazon their arms with an eagle's head between crossed tridents, red on white.[2] 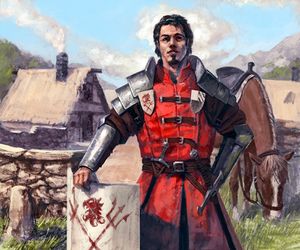 Ser Kyle Condon is considered the right hand man of Lord Medger Cerwyn. Lord Roose Bolton leaves Kyle and Ronnel Stout in charge of a strong force with orders to defend the Trident against a Lannister incursion.[1]

Brienne of Tarth and her companions see the corpses of the perpetrators of the raid on Saltpans hanged from trees. Among the dead are men with tridents badges sewn on their breasts, presumably Condon or Manderly men-at-arms who became broken men during the War of the Five Kings.[3]

House Condon at the end of the third century

The known Condons during the timespan of the events described in A Song of Ice and Fire are: