House Florent of Brightwater Keep is a noble house from Brightwater Keep in the Reach, one of the main houses sworn to House Tyrell of Highgarden.[4][5] Their sigil is a red-gold fox's head encircled by blue flowers on ermine.[6][7][8]

Descended from Garth Greenhand by his daughter Florys the Fox,[3] House Florent boasts a superior claim to Highgarden by their close blood ties to the House Gardener, the extinct Kings of the Reach.[9]

Kingdom of the Reach

According to legend, the Houses Florent, Ball, and Peake trace their descent from the sons of Florys the Fox's three husbands, each kept ignorant of the existence of the others. Florys was a daughter of Garth Greenhand from the Age of Heroes, the cleverest of his children.[3]

As vassals of House Gardener, the Florents married into the royal family numerous times.[9] Through the centuries of the Kingdom of the Reach, the Peakes and Osgreys boasted about marrying their daughters to Florents.[15][16]

During Aegon's Conquest, House Florent followed their liege, King Mern IX Gardener, in taking up arms against Aegon the Conqueror during the Field of Fire. After the battle, when King Mern and his sons burned and the Gardeners' line ended, Aegon named the Tyrells as Lord Paramount of the Reach, despite the Florents possessing a superior claim by their blood ties to the Kings of the Reach.[9][17] House Florent was among the great houses of the Reach that bitterly complained about being made vassals of the Tyrells and insisted that their blood was nobler than that of the "upjumped stewards". Their protests were denied by King Aegon I, perhaps because the Florents had fought House Targaryen when the Tyrells did not.[17]

When Lord Unwin Peake sought to make his daughter Myrielle the queen to King Aegon III Targaryen after the Dance of the Dragons, Lady Samantha Hightower nominated nubile maidens from House Florent, among other nobles houses, as potential queen consorts for the king.[15]

In 206 AC, during the reign of Daeron II Targaryen, Ser Arlan and Dunk were in service to Lord Florent, who was blind. The Florent arms were spotted by Ser Duncan in the assembled heraldry at the tourney at Ashford Meadow three years later.[18] Ser Aladore Florent, heir to Brightwater Keep, and Ser Jon Florent were listed on the rolls.[19]

Selyse Florent wed Stannis Baratheon, Lord of Dragonstone and the brother of King Robert I Baratheon. Her cousin, Delena Florent, was despoiled by the king during the wedding feast.[20] Lord Tywin Lannister offered his dwarf son, Tyrion, for marriage to Delena, but her father, Ser Colin Florent, instead married her to one of his knights, Hosman Norcross.[21] Delena gave birth to Edric Storm.[10] Ser Axell Florent, the brother of Lord Alester Florent of Brightwater Keep, serves Stannis as castellan of Dragonstone.[10] 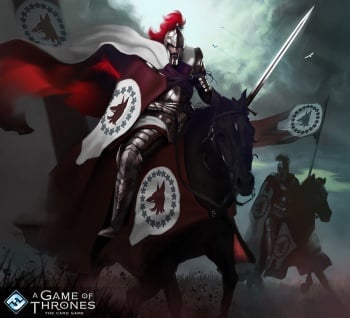 Melisandre, a red priestess, has joined the court of Stannis Baratheon, Lord of Dragonstone, and his wife, Lady Selyse Florent, fervently takes up the worship of R'hllor, the Lord of Light.[22] Selyse becomes Stannis's queen after he announces his claim to the Iron Throne.[10] As the War of the Five Kings breaks out, House Florent follows House Tyrell in supporting the late King Robert I Baratheon's youngest brother, Renly, Lord of Storm's End. The Florents field roughly two thousand men.[23]

Upon Renly's death at Storm's End, the Florents are the first and the most powerful of the Reach houses who defect to Stannis.[24] Selyse's uncle, Lord Alester Florent, begins following R'hllor.[7] Alester's nephew, Ser Erren, is one of the knights Stannis sends to recruit Renly's infantry at Bitterbridge, but they do not return.[7] Alester's son-in-law, Lord Randyll Tarly, puts many Florent men-at-arms to death when he seizes Renly's stores to ensure they do not go over to Stannis's side.[25]

Lord Alester is with Stannis during the parley with Ser Cortnay Penrose, who refuses to yield Storm's End or his ward, Edric Storm, the bastard son of Delena Florent and King Robert.[7] Edric is sent to Dragonstone after Cortnay's death.[26]

Selyse's brother, Ser Imry Florent, is given command of Stannis's royal fleet in the Battle of the Blackwater. He relies on the size of his fleet and does not send scouts ahead. Almost his entire force is trapped in the Blackwater Rush by Tyrion Lannister's defensive chain and destroyed by wildfire; he dies on Fury along with most of his men.[26] Despite the spirited defense of King's Landing, Stannis's army seems within sight of victory. However, the Florents' rivals, the Tyrells, arrive with Lord Tywin Lannister from south of the Blackwater and rout Stannis's men.[27]

Most of Stannis Baratheon's men rescued from the shoreline by the Lysene fleet of Salladhor Saan wear the badge of Brightwater Keep.[10] More than half of Stannis's men on Dragonstone are Florents,[12] and Lord Alester Florent becomes Hand of the King.[10] Alester's brother, Ser Axell Florent, arrests Ser Davos Seaworth when the Onion Knight intends to murder Melisandre.[28]

The Florents still dispute House Tyrell's ownership of Highgarden.[29] Lord Tywin Lannister, the Hand of King Joffrey I Baratheon, dispossesses the Florents of their holdings and awards them to Ser Garlan Tyrell, the second son of Mace Tyrell, Lord Paramount of the Reach, as a reward for loyal service, forming House Tyrell of Brightwater Keep.[21] Ser Erren Florent is held captive at Highgarden.[9]

When Alester plots to wed Stannis's daughter, Princess Shireen Baratheon, to Joffrey's brother, Prince Tommen Baratheon, in an effort to make peace without Stannis's knowledge, he is thrown in the dungeons with Davos.[30] Axell counsels Stannis to put Claw Isle to the torch in retaliation for Lord Ardrian Celtigar bending the knee, but Stannis dismisses this idea, agreeing with Davos that it is an evil notion, and Davos becomes Alester's successor as King's Hand.[12] Davos arranges for Edric Storm to be sent to Lys to avoid being burned alive by Melisandre.[31]

During the battle beneath the Wall, Jon Snow spots a ring of flowers amongst the banners when Stannis's host attacks the free folk camp.[32] The banners of House Florent are later spotted flying at Castle Black by Samwell Tarly.[33] 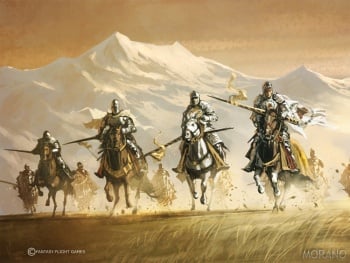 The new head of the house, Alester's son Alekyne, has taken refuge in Oldtown, where his sister Rhea is the wife of Leyton Hightower, Lord of the Hightower.[2]

Ser Garlan Tyrell sets out with half the Tyrell strength to take Brightwater Keep[34] from Ser Colin Florent, the castle's castellan.[2] It is unknown if Garlan succeeds in doing so before the taking of the Shields by the ironborn.[35]

Lord Davos Seaworth recalled that when Stannis Baratheon sailed for the Wall, Melisandre burned Lord Alester Florent alive to obtain favorable winds for the voyage.[36] Once Stannis arrived in the north, he left Ser Axell Florent with Queen Selyse Florent and some fellow queen's men at Eastwatch-by-the-Sea.[37] Axell begins calling himself the Queen's Hand.[38]

Selyse and Axell stop at Castle Black on their way to the Nightfort. Axell hopes to meet the beautiful Val.[14] The queen arranges marriages between her men and the free folk, betrothing Axell to the eldest daughter of Gerrick Kingsblood.[39]

House Florent at the end of the third century 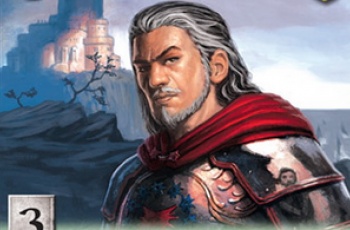 The known Florents during the timespan of the events described in A Song of Ice and Fire are:

With unspecified familiar relationship to the main branch:

If truth be told, even our claim to Highgarden is a bit dodgy, just as those dreadful Florents are always whining.[29]

We Florents have the blood of the old Gardener kings in our veins.[42]