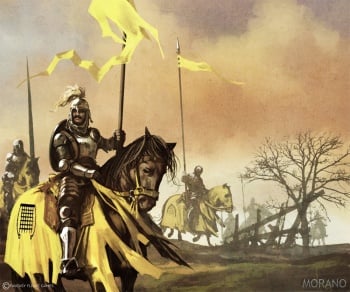 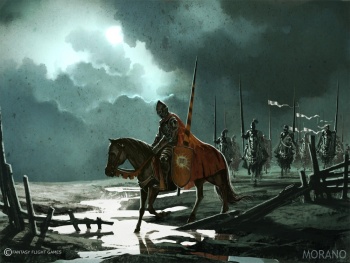 House Yronwood of Yronwood is the most powerful house in Dorne after the ruling Martells.[1] Their seat, Yronwood, is the last fortress defending the Boneway; this is reflected in their title Warden of the Stone Way.[1] House Yronwood claimed the title High King of Dorne before the arrival of the Rhoynar, and the head of the house continues to be called the Bloodroyal.

According to semi-canon sources, their motto is We Guard the Way.[2] Their blazon is a black portcullis grill over sand.[3]

Members of House Yronwood tend to have blond hair and blue eyes.[4]

An ancient family of First Men origin, the Yronwoods built Yronwood in the foothills of the Red Mountains and controlled the Stone Way, one of the two great passes into Dorne. The valuable land allowed the Yronwoods to rule much of northern Dorne. Their domain eventually reached from Wyl to the headwaters of the Greenblood,[5] and, at times, even the Sandship of House Martell.[6] Although rich and powerful, the Yronwoods were unable to conquer the Kings of Stone and Sky from House Fowler, the Kings of the Torrentine from House Dayne. The Yronwood claim to be High King of Dorne was also opposed by rival families who lived near Lemonwood.[5]

The ancient Yronwood kings oft fought with the Storm Kings, as seen when Yoren Yronwood was turned back by King Durran the Young at the Battle by the Bloody Pool.[7] King Olyvar Yronwood also invaded King Erich VII Durrandon's domain.[8]

When the Rhoynar came to southern Westeros with Nymeria aboard her ten thousand ships, the Yronwoods controlled half of Dorne.[9] Nymeria wed Mors Martell, Lord of the Sandship, however, increasing the size of House Martell's host tenfold.[10] Nymeria named her husband the Prince of Dorne, asserting dominion over all of Dorne.[10]

King Yorick V Yronwood was supported in Nymeria's War by his bannermen, Houses Blackmont, Jordayne, Qorgyle, and Wyl, among many others. In the ninth year of warfare Mors died at Yorick's sword in the Third Battle of the Boneway. Nymeria took control of the Martell armies, however, and it took another two years of fighting before Yorick bent the knee and was sent to the Wall.[10] The Yronwoods became the most powerful bannermen of House Nymeros Martell of Sunspear, rulers of a newly-united principality.[11] The Yronwoods also have a rivalry with House Fowler, who supported the Martells in Nymeria's War.[1]

The Yronwoods fought against House Targaryen during the First Dornish War.[12]

Ser Gyles Yronwood was an exiled knight who served Queen Rhaenyra Targaryen during the Dance of the Dragons. Gyles was one of the Seven Who Rode to find Joffrey Velaryon during the Storming of the Dragonpit, but he was slain in the failed attempt to rescue the prince.[13]

The Yronwoods joined the Seven Kingdoms in 187 AC when Maron Martell, Prince of Dorne, submitted to King Daeron II Targaryen and the Iron Throne.[14] However, the Yronwoods joined Ser Aegor Rivers against the Targaryens and Martells in three of the five Blackfyre Rebellions.[15]

When Prince Oberyn Martell was sixteen years old, he was found abed with old Lord Edgar Yronwood's paramour. Although the ensuing duel was only to first blood, Edgar's wounds festered and he died shortly afterwards, originating rumors that the prince's blade had been poisoned and earning him the nickname of the "Red Viper". Oberyn fled to the Free Cities in exile. To "repay a blood debt", Doran Martell, Prince of Dorne, later sent his second child, Quentyn Martell, to foster with Edgar's grandson, Lord Anders Yronwood.[9] Quentyn served at Yronwood as page and squire, and he chose to be knighted by Anders instead of his uncle, Oberyn.[15] Quentyn was smitten with Ynys Yronwood, but the girl instead married Ser Ryon Allyrion. Her younger sister, Gwyneth, is interested in the prince.[4]

The Yornwoods are proud of their historical domains and power,[16] and the lord of the family is still referred to as the Bloodroyal.[17]

Following Doran's instructions, Lord Anders Yronwood musters and maintains an army in the Boneway during the War of the Five Kings.[18]

Princess Arianne Martell fears that the Yronwoods will declare for her younger brother, Prince Quentyn, instead of herself as the heir of their father Doran, Prince of Dorne.[15][19] Arianne is mistaken, however, as Doran has a different goal for Quentyn.[1] There are sightings of Quentyn and Lord Yronwood's son, Cletus, at the Planky Town.[19]

Because Princess Myrcella Baratheon was wounded and Ser Arys Oakheart was killed during Arianne's failed plot to crown Myrcella as queen, Doran has Anders delay Ser Balon Swann of the Kingsguard at Yronwood by feasting him for a fortnight.[1]

Ser Cletus Yronwood, the heir of Lord Anders,[20] and his cousin, Ser Archibald Yronwood, accompany Prince Quentyn Martell in his mission to find and wed Daenerys Targaryen in Essos. Cletus is killed when corsairs attack the Meadowlark near the Disputed Lands, however.[4] Archibald, Quentyn, and Ser Gerris Drinkwater join the Windblown in Volantis and participate in the siege of Astapor.[21] The Tattered Prince sends them to Meereen, where Daenerys refuses the secret marriage pact and instead marries Hizdahr zo Loraq.[22]

Quentyn attempts to tame one of Daenerys's dragons after the queen flees the city atop Drogon,[23] but he is mortally wounded by Rhaegal and his companions Archibald and Gerris are imprisoned.[24] Ser Barristan Selmy sends the two Dornish knights as envoys to the Tattered Prince.[24]

House Yronwood at the end of the third century

The known Yronwoods during the timespan of the events described in A Song of Ice and Fire are: