Ser Ilyn Payne is a knight from House Payne. He serves as the King's Justice, the royal executioner, for King Robert I Baratheon. Ilyn is a cousin to Podrick Payne.[1][2] In the television adaptation Game of Thrones he is portrayed by Wilko Johnson.

Ilyn is a grim man, thin, with a beardless, pockmarked face. He has a deep set of pale, colorless eyes and hollow cheeks. He is almost completely bald, but the few wisps of hair he has are "as long as a woman's". He wears iron-grey chainmail over boiled leather with a large greatsword worn over his right shoulder.[3]

It has been mentioned more than once that Ilyn lives for nothing but killing.[4] Due to his appearance as well as his silence, many people find him terrifying, a suitable trait for the King's Justice.

While Ilyn keeps his weaponry immaculate, his chambers within the Red Keep's dungeon are poorly kept. Since he cannot read or write, he delegates to underlings, such as Rennifer Longwaters.[4] 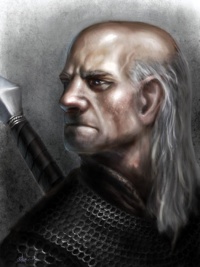 Ser Ilyn was the captain of Lord Tywin Lannister's guard when he was Hand of the King for King Aerys II Targaryen. He was heard saying that it was Tywin who truly ruled the Seven Kingdoms, rather than Aerys. The king had Ilyn's tongue torn out with hot pincers for the comment.[5][3]

Ilyn was named as the King's Justice by King Robert I Baratheon as a wedding present for Tywin. It was a sinecure to compensate Ilyn for the tongue he lost in the service of House Lannister. Ilyn is an extremely skilled executioner. He has never botched an execution and seldom requires more than a single stroke to finish off his charges. 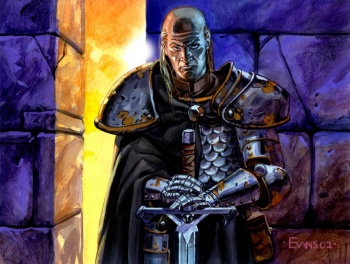 Ser Ilyn Payne is among the members of the king's court who come north to near the Trident, to escort King Robert I Baratheon back to King's Landing after his trip to Winterfell. Sansa Stark is terrified of Ilyn upon seeing him.[3]

When Eddard Stark is arrested by the Lannisters after Robert's death, Ilyn takes the ancestral Valyrian steel greatsword of House Stark, Ice, for his own. He later executes Eddard at the Great Sept of Baelor with Ice, on the orders of King Joffrey I Baratheon[6]

Ilyn's execution of Eddard Stark awards him a place on Arya Stark's list.[7]

During the Battle of the Blackwater, Queen Cersei Lannister has Ilyn remain with her in the Queen's Ballroom of Maegor's Holdfast, in the Red Keep.[8] When Osfryd Kettleblack informs the Queen that a groom and two maidservants where caught trying to flee the Red Keep with three of the king's horses, she has Ser Ilyn execute them and place their heads on pike outside the stables. The reason for Ser Ilyn's presence, however, is to have him kill Sansa and herself if Stannis is victorious.[9]

When the turncloaks and hostages of the Battle of the Blackwater are presented in the throne room, Joffrey beckons Ser Ilyn to execute a bastard of House Florent who remains defiant and hails Stannis as the true king and denounces Joffrey as a monster and abomination born of incest.[10]

Lord Tywin Lannister takes Ice from Ilyn and presents him with a new sword. Ilyn is present at King Joffrey Baratheon's wedding feast. Joffrey asks him for his sword so he and his new wife, Margaery Tyrell, can cut the huge dove pie. Ilyn now wields a greatsword that is six feet long and is silver bright with runes. The blade is decorated with ruby eyes on its pommel and has a chunk of dragonglass carved in the shape of a grinning skull.[11] 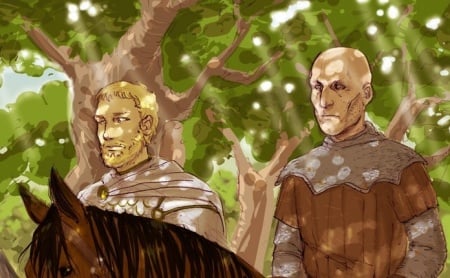 Ser Jaime Lannister demands the services of Ser Ilyn on his ride north to Riverrun as a condition for leading the expedition. Ilyn begins practicing the sword with Jaime when they stop at Hayford. Jaime chooses Ilyn as his sparring partner because Ilyn can neither talk, read nor write. As a result of this, Jaime reveals many of his darker secrets to Ilyn, knowing the mute and illiterate knight can never reveal it to anyone.[4]

During the siege of Riverrun, a camp follower shrinks away from Ilyn in fear. Jaime has Ilyn cut down Edmure Tully from the gallows upon which he has oft been threatened by Ser Ryman Frey.[12]

Oft-times Ser Ilyn frightens me as well, sweet lady. He has a fearsome aspect.[3]

Ser Ilyn has not been feeling talkative these past fourteen years.[3]

Ser Ilyn made the perfect drinking companion. He never interrupted, never disagreed, never complained or asked for favors or told long pointless stories. All he did was drink and listen.[14]