From A Wiki of Ice and Fire
Jump to: navigation, search
"Jace" redirects here. For the recruit of the Night's Watch, see Jace (Night's Watch).

Prince Jacaerys Velaryon, also known as Jace, was the firstborn son of Princess Rhaenyra Targaryen and her first husband, Ser Laenor Velaryon. When Rhaenyra was crowned queen during the Dance of the Dragons, she named Jacaerys as Prince of Dragonstone and heir to the Iron Throne. Jacaerys was a dragonrider whose dragon was Vermax.[3]

In the television adaptation House of the Dragon, Jacaerys is portrayed by Harry Collett and Leo Hart (young).[4][5]

Jace was a strapping boy,[2] who grew to become a handsome teenager.[3] Like his brothers, Lucerys and Joffrey, he had brown hair and eyes, and a pug nose. This made many at court suspect that Ser Harwin Strong, the sworn shield of Princess Rhaenyra Targaryen, was the brothers' true father.[2][6]

Responsible,[7] bold,[3] and politically savvy,[7] Jace was protective of his family.[2]

Jacaerys became skilled at arms by serving as a squire.[3]

Prince Jacaerys was born at the end of 114 AC to Rhaenyra Targaryen, daughter of King Viserys I Targaryen and Princess of Dragonstone, and her husband Ser Laenor Velaryon. Laenor wished to name the boy Joffrey, in memory of his late friend, Ser Joffrey Lonmouth, but he was overruled by his father, Lord Corlys Velaryon. Instead, the child was given a traditional Velaryon name, Jacaerys, and nicknamed "Jace" by his friends and family.[2]

Jace's uncle, Prince Daeron Targaryen, was born soon afterwards to Viserys's second wife, Queen Alicent Hightower. Trying to prevent any enmity (as existed between Rhaenyra and Alicent), Viserys ordered that Jacaerys and Daemon share a wet nurse until they were weaned, hoping that them being milk brothers would make a difference.[2]

Jace's brother Lucerys was born in 115 AC, followed by Joffrey in 117 AC. By royal decree, each of Rhaenyra's sons was presented with a dragon egg while in the cradle. Those who doubted the paternity of the children whispered that the eggs would never hatch, but the birth of three dragons proved otherwise. Jacaerys's hatchling was named Vermax. According to Septon Eustace, while holding court King Viserys once told the young Jacaerys that the Iron Throne would one day be his.[2]

The king's hopes for peace between his sons and grandsons was futile. Alicent's three sons (Aegon, Aemond, and Daeron Targaryen) became bitter rivals to Rhaenyra's three sons, resenting the Velaryons for stealing their birthright, the Iron Throne. The enforced closeness between the six boys (attending feasts, sometimes training together at arms, or studying under the same maesters) only increased this dislike.[2]

In 118 AC, with the blessing of the king, Rhaenyra announced the betrothal of her two eldest sons to their cousins, the daughters of Prince Daemon Targaryen and Lady Laena Velaryon. Jacaerys, four years old, was betrothed to Baela, two.[2] 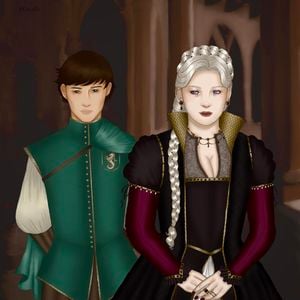 Ser Laenor Velaryon died in 120 AC, when his son Jacaerys was six years old, and King Viserys I Targaryen visited High Tide on Driftmark with his family for the funeral. Prince Aemond Targaryen claimed Vhagar, the eldest and largest of the dragons, but was caught by Jacaerys's youngest brother, Joffrey. Aemond mocked his three nephews as "strong boys", alluding to the insinuation they had been fathered by Ser Harwin Strong, and the four boys fought. When Aemond gained the upper hand against Jacaerys, Lucerys took out Aemond's right eye with his dagger. King Viserys decreed afterward that anyone who mocked his grandsons as "Strongs" again would have their tongues pulled out with hot pincers. Further, Rhaenyra and her sons were to stay at Dragonstone, while Alicent and her sons returned to King's Landing.[6][2]

In 126 AC, Jacaerys's grandfather, Lord Corlys Velaryon, became ill. The question of who would succeed him as Lord of the Tides and Master of Driftmark became a debate, as his children Laenor and Laena were dead, and Laenor's eldest son Jacaerys would eventually succeed his other grandfather and mother to the Iron Throne. Rhaenyra urged Corlys to name her second son, Lucerys, as his heir, but Corlys's eldest nephew, Ser Vaemond Velaryon, protested on the grounds that Rhaenyra's Velaryon sons were not Laenor's, but the bastards of Harwin Strong. Rhaenyra had her husband seize Vaemond and strike off his head, and fed the body to her dragon, Syrax. Vaemond's five cousins fled to King's Landing with Vaemond's wife and sons, Daemion and Daeron Velaryon, to seek justice before the king. Viserys heard them out, but ordered each of the cousins' tongues to be removed when they called Rhaenyra's sons bastards.[2]

Viserys's hand became infected after cutting it on the throne, and it was feared that he might die. On the first day of 127 AC, the king held a feast to celebrate the return of his health, and Rhaenyra and Alicent made a show of amity and love. However, after the king left the feast, Aemond toasted his three Velaryon nephews, speaking in mock admiration of their brown hair, brown eyes, and strength, calling them "three strong boys". Later in the evening, Aegon took offense when Jacaerys asked his wife, Helaena Targaryen, for a dance, but the Kingsguard prevented them from fighting.[2] 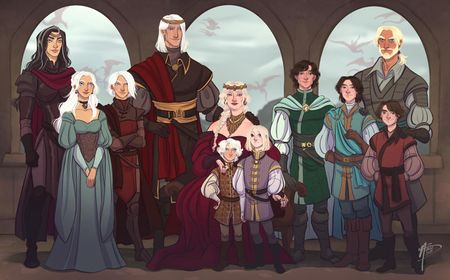 The Blacks, with Jacaerys fourth to the right, by Naomimakesart ©

In 129 AC, King Viserys I Targaryen died in his sleep, and a succession war broke out between the blacks of Queen Rhaenyra Targaryen, Viserys's choice of heir, and the greens of her younger half-brother, King Aegon II Targaryen, Viserys's eldest son. At Aegon's first green council, Ser Criston Cole objected to Rhaenyra's claim by stating that her heir, Prince Jacaerys, was a bastard.[3]

Jacaerys was fourteen years old at the start of the civil war that became known as the Dance of the Dragons. His dragon, Vermax, was thriving, and growing every year. At Rhaenyra's first black council on Dragonstone, Jacaerys and his brother, Prince Lucerys Velaryon, volunteered to serve as her envoys to the lords of Westeros to raise support for her claim. Rhaenyra allowed this, but she first made her young sons swear on The Seven-Pointed Star that they would not take part in any fighting. The next day, at Rhaenyra's coronation as Queen of the Andals, the Rhoynar, and the First Men, she named Jacaerys as Prince of Dragonstone and heir to the Iron Throne. Aegon II sent terms saying if Rhaenyra would submit, he would grant her the possession of Dragonstone to eventually be inherited by Jacaerys, but she rejected the offer.[3]

Jacaerys, as Rhaenyra's oldest son, was given the more difficult mission as an envoy. He flew Vermax to the Eyrie, where Lady Jeyne Arryn agreed to support Rhaenyra if she defended the Vale of Arryn with dragonriders. The salacious Mushroom alleged that Jeyne offered her support if Jace could please her in bed, but Septon Eustace discounts the story. Jacaerys then gained the support of the Three Sisters by meeting with Lords Borrell and Sunderland at Sisterton. At White Harbor, Jacaerys negotiated with Desmond Manderly at White Harbor that the lord's youngest daughter would marry Prince Joffrey Velaryon once the war ended.[7]

According to Grand Maester Munkun, Jacaerys befriended Lord Cregan Stark at Winterfell, as the prince reminded the lord of a younger brother who had passed away. After drinking and hunting together, the pair swore an oath of brotherhood. Eustace, on the other hand, claimed that Jacaerys tried to convince Cregan to follow Faith of the Seven instead of the old gods.[7] Mushroom states Jacaerys fell in love with Cregan's half-sister, Sara Snow, and married her in secret in the godswood of Winterfell, although Archmaester Gyldayn discounts the fool's claim.[7] Mushroom also claimed that Vermax laid a clutch of dragon eggs in the crypts beneath Winterfell.[8][7] Jacaerys ultimately gained the north through the Pact of Ice and Fire, promising that if he were to have children, his firstborn daughter would be betrothed to Cregan's heir, Rickon Stark.[7]

Queen Rhaenyra was consumed by grief after her second son, Prince Lucerys, was killed by his uncle, Prince Aemond Targaryen, near Storm's End.[7] According to Mushroom, Ser Arryk Cargyll was sent to Dragonstone to avenge the murder of Prince Jaehaerys Targaryen by assassinating Jacaerys and Joffrey. Arryk was killed by his twin, Ser Erryk Cargyll, however.[1]

Princess Rhaenys Targaryen was killed at the battle at Rook's Rest, leaving her grieving husband, Lord Corlys Velaryon, estranged from Rhaenyra. Jacaerys reconciled Corlys with Rhaenyra by naming him Hand of the Queen, and Jace began plotting an attack on King's Landing with his grandfather. He sent his surviving younger brother, Prince Joffrey, to the Vale. Lady Baela Targaryen wanted to marry Jacaerys at Dragonstone, but Munkun claims that the prince preferred to wait until the war had ended.[1]

To make up for the losses of Arrax at Storm's End and Meleys at Rook's Rest, Mushroom claims he suggested that the blacks recruit dragonseeds to attempt to claim the six riderless dragons nesting on the island of Dragonstone; Munkun claims the Sowing of the Seeds was Jacaery's suggestion. The prince vowed that any man or woman who could master a dragon would be ennobled.[1][9] Several dragonseeds succeeded in the Red Sowing, including Addam of Hull, who was adopted by Lord Corlys into House Velaryon. On the request of Corlys and Jacaerys, Queen Rhaenyra legitimized the dragonseed as Addam Velaryon and made him heir to Driftmark.[1]

Jacaerys arranged for the safety of his half brothers, Aegon, nine, and Viserys, seven, by reaching out to the Prince of Pentos, who agreed to foster the boys. Near the end of 129 AC, Aegon and Viserys boarded the Gay Abandon to set sail for Pentos, but in the Gullet the ship ran into a fleet of warships sent by the Triarchy, allies of the greens, with Gay Abandon captured and its escort ships sunk or taken. Aegon the Younger escaped on his dragon Stormcloud to Dragonstone to tell the blacks of the attack, however.[1]

In the ensuing Battle of the Gullet, Jacaerys and four dragonseeds attacked the Triarchy's fleet with dragonflame. Victory for the blacks seemed at hand, until Vermax flew too low, possibly wounded from a crossbow bolt to the eye or pulled down by a grapnel, and crashed into a burning galley. Jacaerys lept free and clung to the smoking wreckage of the ship, but was struck by Myrish crossbow quarrels until he sank into the sea. Driftmark was also invaded by the Triarchy's soldiers during the battle.[1]

The death of Jacaerys, Prince of Dragonstone, was a terrible loss for the blacks. Many became further despondent after the Battle on the Honeywine, but a vengeful Rhaenyra Targaryen became focused on capturing King's Landing.[1]

Near the end of the Dance of the Dragons, Lord Cregan Stark led an army of northmen to King's Landing to honor the pledge he had made to the late Jacaerys.[10]

We should bear those messages. Dragons will win the lords over quicker than ravens.[3]

—Jacaerys to the black council

—Viserys I Targaryen to Jacaerys

Seven save this realm if we seat a bastard on the Iron Throne.[3]

—Criston Cole to the green council

Though his fifteenth nameday was still half a year away, Prince Jacaerys proved himself a man, and a worthy heir to the Iron Throne.[7]