From A Wiki of Ice and Fire
(Redirected from Jester)
Jump to: navigation, search A fool or jester is a comic entertainer of nobles and their guests at court. 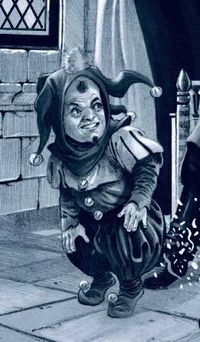 Jesters use storytelling, japes,[1] juggling,[2] music,[3] acrobatics,[2] and other skills to entertain their audiences. Fools often wear brightly colored motley[3][4] and fanciful head-wear.[5][6] Slave jesters in Volantis have their faces tattooed in motley.[7]

Fools are often considered lackwits and simpletons,[8] but many are quite witty.[5][9] Nobles often overlook fools and speak freely in their company.[10][11]

The Fool's Gate is one of the gates of Maidenpool,[12] a town connected with the legendary Florian the Fool.[4] A fool is depicted in the arms of House Falwell. The iron figurehead of Joso's Prank is a laughing jester's face.[13]

Florian the Fool was a legendary fool and knight associated with Jonquil and Maidenpool.[4]

Lord Rupert Falwell, a famed member of the Faith Militant, was known as the Fighting Fool.[14]

The Goodwife was the first fool to serve at the Red Keep.[15]

Prince Baelon Targaryen called himself the Silver Fool while disguised as mystery knight in a tourney at Old Oak.[16]

Forrest Frey was mocked as "Fool Frey" after boldly asking for the hand of Princess Rhaenyra Targaryen.[17]

Mushroom was a fool who served Rhaenyra during the Dance of the Dragons. Because he was considered a lackwit by many, nobles often spoke freely around him. The Testimony of Mushroom details his recollections of the court.[10]

Lord Steffon Baratheon purchased Patchface in Volantis and freed him from slavery, but the talented boy became a lackwit after nearly drowning in Shipbreaker Bay.[5]

When Gerion Lannister sailed for Valyria in search of Brightroar, Lord Tywin Lannister referred to it as a "fool's quest".[18]

The fool of Lord Renly Baratheon made japes about the singing of Brienne of Tarth.[1] Lord Paxter Redwyne's fool made fun of Samwell Tarly when the youth visited the Arbor.[9] 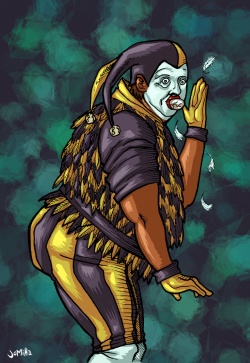 Ser Brynden Tully refers to the vain court of his niece, Lady Lysa Arryn, at the Eyrie as a "fool's festival".[19]

King Joffrey I Baratheon strips knighthood from Ser Dontos Hollard and proclaims him a fool lower than Moon Boy.[20][21] Dontos comes to believe that Moon Boy is secretly employed by Lord Varys.[11]

During Renly Baratheon's feast at Bitterbridge, a plump fool chases a dwarf to entertain the guests.[22]

To distract nobles during the Battle of the Blackwater, Moon Boy walks on stilts and Dontos rides a broomstick horse.[23]

Butterbumps juggles and sings when Sansa Stark has supper with Olenna Tyrell and her granddaughter, Margaery.[3]

During the Red Wedding, Catelyn Stark kills Jinglebell, the fool at the Twins.[24]

Brienne of Tarth searches for Dontos and Sansa, since the two disappeared from King's Landing after Joffrey's death;[25] Brienne does not know that Dontos was killed in Blackwater Bay.[26] A pious dwarf tells her of a motley fool he had seen at Maidenpool,[27] and Dick Crabb escorts her to Crackclaw Point in search of this fool. When they arrive at the Whispers, Brienne learns she has been tracking the murderous Shagwell, one of the Brave Companions.[28]

A handmaid of Betharios of Braavos sleeps with the fool of Lord Wyman Manderly to gather information for Symond Frey.[29]

Fools at the end of the third century

Fools are meant to be laughed at, where is the harm in that?[16]

—Saera Targaryen to Jaehaerys I Targaryen

Only I could lighten Her Grace's heart. In this dark hour, I became the queen's counselor, setting aside my fool's sceptre and pointed hat to lend her all my wisdom and compassion. Unbeknownst to all, it was the jester who ruled them now, an invisible king in motley.[39]

—Mushroom in his Testimony

Duncan: You must think me an utter fool.
Tanselle: All men are fools, and all men are knights.[41]

—Duncan the Tall and Tanselle

We have found the most splendid fool. Only a boy, yet nimble as a monkey and witty as a dozen courtiers. He juggles and riddles and does magic, and he can sing prettily in four tongues. We have bought his freedom and hope to bring him home with us. Robert will be delighted with him, and perhaps in time he will even teach Stannis how to laugh.[5]

I hear all sorts of things as a fool that I never heard when I was a knight. They talk as though I am not there.[11]

All men are fools, if truth be told, but the ones in motley are more amusing than the ones with crowns.[3]