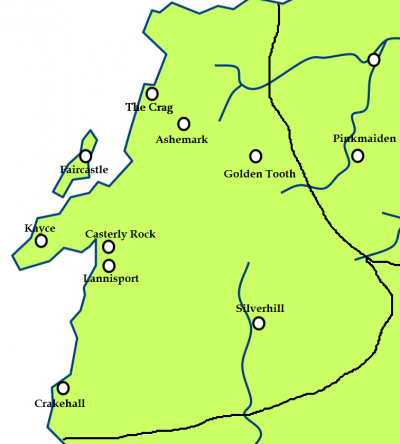 Kayce
The westerlands and the location of Kayce

Kayce is the seat of House Kenning of Kayce in the westerlands.[1] The castle[2] and town[3] are located along the Sunset Sea on a peninsula south of Fair Isle and west of Casterly Rock. Feastfires is located nearby to the southwest.[4]

Kayce was controlled by the ironborn during the era of the driftwood kings. The town was freed when Herrock the Whoreson, a descendant of House Kenning of Harlaw,[2] used his horn to signal the whores of the town to open a postern gate, allowing Herrock's men to enter the town. The region was then part of the dominion of the Kings of the Rock from House Lannister. Three ironborn kings failed in their attempts to reclaim the town, with Herrock killing two of them.[5]

According to Maester Yandel, Lord Dalton Greyjoy led his reavers in taking Kayce during the Dance of the Dragons.[7] The widow of the Knight of Kayce was taken by Dalton as a salt wife.[8] According to Archmaester Gyldayn, Lady Johanna Lannister was focused on defending Kayce instead of involving the westerlands further in House Targaryen's civil war.[9] Leading a host from Casterly Rock and Lannisport, Johanna routed the ironborn beneath Kayce's walls, with Dalton's uncle slain in the battle. Songs claim Johanna slew twelve ironmen in the fighting, although scholars believe she only carried a banner.[10] When Lord Alyn Velaryon sailed to confront Dalton, ironborn longships gathered along the Sunset Sea, including Kayce. Dalton was assassinated at Faircastle before Alyn arrived in the west, however.[8] 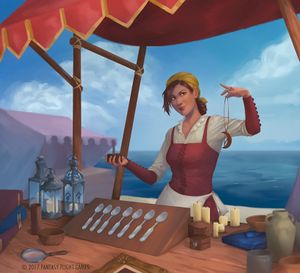 A merchant from Kayce, by Gabriela Birchal © Fantasy Flight Games

Merchants from Kayce sought loans from Tytos Lannister after the Lord of Casterly Rock began to extend and forgive debts.[11]

Sansa Stark spots Ser Kennos of Kayce training in the yard of the Red Keep in King's Landing.[12]

Kennos carries the Horn of Herrock as part of Ser Jaime Lannister's host in the riverlands.[13]