From A Wiki of Ice and Fire
(Redirected from King)
Jump to: navigation, search

Kingship is the position and power of a king in the known world.

In Westeros, kings traditionally inherit the title through male-preference primogeniture, although the Iron Islands once had the elective kingsmoot.[1] Dorne started using the title "Prince of Dorne" after Lord Mors Martell married Queen Nymeria, and the new rulers chose to abandon the Andal customs in favor of those of the Rhoynar.[2] The Seven Kingdoms are now ruled by the King of the Andals, the Rhoynar, and the First Men who rules from the Iron Throne.[3]

The city of Meereen on Slaver's Bay once had a king.[4] Instead of kings, the Free Cities have rulers chosen through democratic and oligarchic systems, such as the triarchs of Volantis, the Prince of Pentos, the Archon of Tyrosh, and the Sealord of Braavos.

Westeros was ruled by a multitude of kings during the Age of the Hundred Kingdoms.[5]

House Targaryen ruled the Seven Kingdoms as Kings of the Andals, the Rhoynar, and the First Men after Aegon's Conquest.[5] House Baratheon succeeded the Targaryens through Robert's Rebellion.[6] 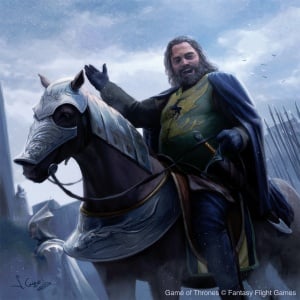 Robert I Baratheon, King of the Andals, the Rhoynar, and the First Men, is mortally wounded by a boar,[7] and he is succeeded by his son, King Joffrey I Baratheon.[8] Renly Baratheon, Lord of Storm's End is crowned king at Highgarden in opposition to his nephew.[9] Following the Battle of the Camps, Robb Stark is declared King in the North at Riverrun.[10]

The exiled Viserys Targaryen dies at Vaes Dothrak,[11] and his younger sister, Daenerys Targaryen, acknowledges herself as queen and the last of House Targaryen.[12]

Rejecting the claims of Joffrey and Renly, Stannis Baratheon, Lord of Dragonstone, declares himself king.[13] Renly is assassinated near Storm's End.[14] Balon Greyjoy, Lord of the Iron Islands, secedes from the Seven Kingdoms and declares himself King of the Isles and the North.[15]

Amid the War of the Five Kings, Balon falls to his death at Pyke[16] and Robb is killed in the Red Wedding.[17] Joffrey dies at his wedding feast and is succeeded by his younger brother, Tommen I Baratheon.[18]

Since Euron Greyjoy claimed the Seastone Chair after Balon's death, Aeron Greyjoy calls for a kingsmoot on Old Wyk to decide succession in the Iron Islands.[1] Despite the efforts of Aeron, Victarion, and Asha Greyjoy, Euron is chosen king after announcing he intends to conquer all of Westeros.[19]

A new corsair king has risen in the Basilisk Isles.[20]

A new pirate king has set up on Torturer's Deep.[22]

Euron Greyjoy at the kingsmoot on Old Wyk, by zippo514 © 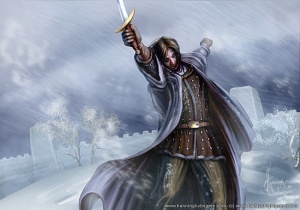 King-Beyond-the-Wall by by Henning Ludvigsen ©