From A Wiki of Ice and Fire
(Redirected from Kitten)
Jump to: navigation, search 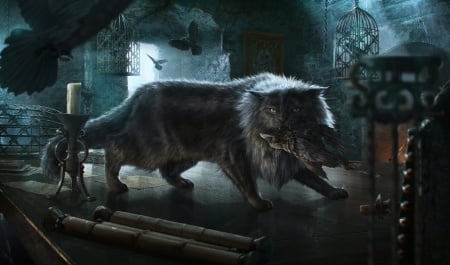 Cats are small felines in the known world similar to the real-life animal. Larger felines include lions, panthers, shadowcats, tigers, and treecats. 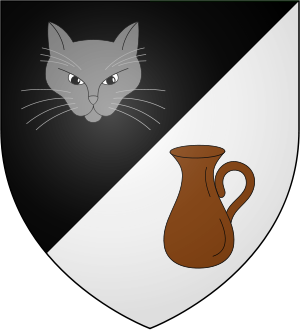 The arms of House Lyberr

A domesticated species, cats can be kept as pets by humans.[1] Quiet, quick, and graceful,[2][3] they are often used to hunt mice[4] and keep buildings free of vermin.[5] Some cultures believe that cats bring good luck,[5] although Westerosi may believe that black cats bring bad luck.[6]

Scrawny cats skulk about Illyrio's manse in Pentos.[7] Braavos is full of cats,[8] with many congregating at Pynto's.[5] One of the brothels in Braavosi is named the Cattery.[9]

Pantera is a six-breasted cat goddess worshiped in Lys.[10]

A cat's face is included in the arms of House Lyberr.

Rats and cats is a game played by children.[11]

The Company of the Cat is a free company in Essos.[13] The Spotted Cat is a famed pit fighter in Meereen.[14]

Lord Hoster Tully refers to his eldest daughter, Catelyn Stark, as his little cat.[15] Samwell Tarly is fond of kittens.[16]

The notorious Maegor the Cruel supposedly butchered one of the cats at Dragonstone when his mother, Queen Visenya Targaryen, first gave him a sword when he was three.[17] His niece, Princess Rhaena, however, enjoyed feeding the castle's cats.[17]

Because the Shivers was believed to have been spread by rats, cats became popular throughout the Seven Kingdoms.[18]

Princess Saera Targaryen was able to persuade her father, King Jaehaerys I Targaryen, to give her a variety of animals, including a kitten. Saera often sneaked cats into the bedchamber of Princess Daella Targaryen, since her sister was afraid of the animals after a beloved kitten scratched her.[18]

After King Aegon II Targaryen ordered the hanging of all ratcatchers in King's Landing in reaction to Blood and Cheese, Ser Otto Hightower brought a hundred cats to the Red Keep to serve as mousers.[19] The lonely Queen Jaehaera Targaryen enjoyed kittens.[20] The contradictory Racallio Ryndoon is said to have loved kittens as well, while hating cats.[21] Because cats were often seen entering and exiting the chambers of Larra Rogare, a worshiper of Pantera, it was rumored that they were spies who purred secrets to her in soft voices. Some tales claimed that Larra could even transform into a cat.[10]

King Aegon V Targaryen believed that his older brother, Prince Aerion Targaryen, threw his cat down a well when they were young.[22]

Ser Kyle called himself the Cat of Misty Moor.[23]

The Sealord of Braavos tested Syrio Forel by asking the water dancer about his pet cat, which the Sealord claimed to have come from a distant island. The observant Syrio, however, noticed that it was not an exotic female cat as the Sealord claimed, but just a common male tomcat.[1]

Princess Rhaenys Targaryen had a black kitten she named Balerion, after the fearsome dragon.[24]

Prince Joffrey Baratheon once used his dagger to open the belly of a pregnant kitchen cat and show the kittens within to his father, King Robert I Baratheon; the angry king responding by striking his son so hard that two baby teeth were knocked out.[25][26] A black tomcat once stole a roast quail served to Lord Tywin Lannister at a dinner with King Robert.[4] The tom also once clawed Joffrey's hand.[27]

Syrio Forel tasks Arya Stark with catching cats in the Red Keep as part of her training in the style of the water dancer.[4]

Arya finds a mother cat with a litter of kittens in the Gods Eye town.[28] She later sees a grey and white cat during her escape from Harrenhal.[29]

The black tomcat of the Red Keep rubs against the leg of Sansa Stark as she makes her way to the godswood.[7]

Angry after learning of the Battle of Oxcross, King Joffrey I Baratheon shoots a yellow cat with a crossbow.[30] 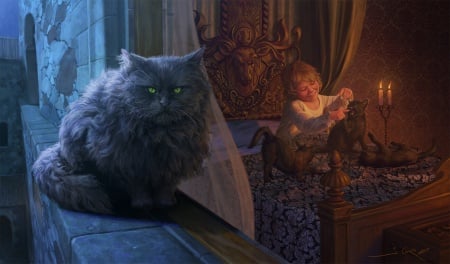 With her mother, Catelyn Stark, in mind, as well as her experience chasing cats in King's Landing, Arya takes the name Cat of the Canals while learning from the Faceless Men in Braavos.[8] Arya enjoys feeding the cats of the city.[31]

Striped tiger pelts and the skins of spotted cats are among the treasures offered by Euron Greyjoy at the kingsmoot on Old Wyk.[32]

A cat follows the blind Arya from Pynto's back to the House of Black and White, and she is able to see through its eyes as a skinchanger.[5]

Someone throws a dead cat at Cersei Lannister during her walk of atonement through the streets of King's Landing.[34]

Tommen feeds morsels from his plate to his kittens. The black tomcat visits his chamber's window at night, but Ser Pounce hisses and scares the tom away.[35]

The cat who wants his bowl of cream must know when to purr and when to show his claws, Ser Duncan.[23]

—Kyle to Duncan the Tall

Syrio: The cat was an ordinary cat, no more. The others expected a fabulous beast, so that is what they saw. How large it was, they said. It was no larger than any other cat, only fat from indolence, for the Sealord fed it from his own table. What curious small ears, they said. Its ears had been chewed away in kitten fights. And it was plainly a tomcat, yet the Sealord said 'her,' and that is what the others saw. Are you hearing?
Arya: You saw what was there.[1]

Cats liked the smell of Cat. Some days she would have a dozen trailing after her before the sun went down. From time to time the girl would throw an oyster at them and watch to see who came away with it. The biggest toms would seldom win, she noticed; oft as not, the prize went to some smaller, quicker animal, thin and mean and hungry. Like me, she told herself. Her favorite was a scrawny old tom with a chewed ear who reminded her of a cat that she'd once chased all around the Red Keep.[31]

Cats were vain and cruel, always ready to turn on you.[36]

Cats go everywhere. No one ever looks at them.[33]

A cat will kill a mouse, a pig will wallow in shit, and a sellsword will run off when he's needed most. Can't be blamed. Just the nature of the beast.[37]