Knights of the Vale 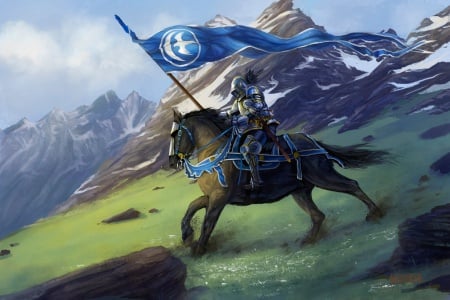 A knight sworn to House Arryn - by Stephen Najarian

The knights of the Vale is a term that refers to both the knights sworn to House Arryn of the Eyrie and the assembled forces of knights from the Vale of Arryn.

The tradition of knighthood is strong in the Vale. During the Andal invasion of Westeros, the Andals first landed in the Fingers.[1] Legends claim that the first King of Mountain and Vale, Ser Artys I Arryn, was the Winged Knight.[2]

The knights of the Vale are sent out in search of the Vale mountain clans on occasion.[3] The lesser clansmen tend to be wiped out by these knights.[1]

Ser Hugh, a young knight who squired in King's Landing with the late Defender of the Vale, Lord Jon Arryn, is killed in the Hand's tourney in the capital. Following her return to the Eyrie, Jon's widow, Lady Lysa Arryn, refuses to permit any of the knights of the Vale to travel to King's Landing to participate in the tourney.[4]

Lady Catelyn Stark arrests Tyrion Lannister and takes him to her sister Lysa at the Eyrie. When Tyrion sarcastically replies to the accusation of murdering Jon, Lysa warns him to speak politely, for she is protected by the knights of the Vale. When Tyrion later demands trial by combat, many knights and nobles ask for the honor of championing Lysa.[5]

After winning his trial by combat against Ser Vardis Egen thanks to his champion Bronn and departing the Eyrie, Tyrion appeals to the mountain clans, who reject his offers of gold, by offering them weapons and armor to face the knights of the Vale.[6]

After Catelyn reunites with her son, Robb Stark, she informs him that the only knight of the Vale that will join them is her uncle Ser Brynden Tully, formerly the Knight of the Gate.[7]

Despite their pleas for aid, Lysa ignores the messages urging the Vale to join forces with her nephew Robb, now the King in the North and King of the Trident. After Robb ponders his next move after the betrayal of Lord Rickard Karstark at Riverrun, he considers that the knights of the Vale could make all the difference in the War of the Five Kings.[8]

Lord Petyr Baelish claims to Sansa Stark that the knights of the Vale will all pledge their swords to her to win her back her birthright, after she is wed to Ser Harrold Hardyng.[9]

No men in the Seven Kingdoms are as bold and true as the knights of the Vale.[5]Lysa Arryn to the Eyrie's court

What do the Stone Crows do, but hide behind rocks and shiver in fear as the knights of the Vale ride by?[6]