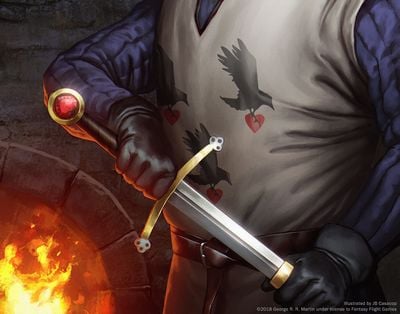 Lady Forlorn is the ancestral longsword[1] of House Corbray.[2] It is made of Valyrian steel.[3] Lady Forlorn is traditionally passed down from the Lord of Heart's Home to his successor, but there have been instances where the lord lends the blade to a son or a brother for their lifetime, and Lady Forlorn is returned to the lord afterward.[4][5][1]

Lady Forlorn has a heart-shaped ruby in its pommel.[1] The Valyrian steel[3] of its blade is smoke-grey in appearance.[1]

The name "Lady Forlorn" is a legacy from the coming of the Andals, and predates the current sword. Robar II Royce, the High King of the First Men of the Vale, claimed the first Lady Forlorn after slaying Qyle Corbray, the King of the Fingers and an Andal leader. Robar wielded Lady Forlorn during the Battle of the Seven Stars, using it to kill Torgold Tollett and a decoy dressed as Ser Artys Arryn. The Corbrays claim that Ser Jaime Corbray slew Robar in the battle, allowing them to reclaim the first Lady Forlorn.[6]

At some point the Corbrays acquired a Valyrian steel sword, which they named Lady Forlorn in honor of the ancient sword. Lord Qarl Corbray used the new blade to kill Ser Davos Darklyn of the Kingsguard during the Battle Beneath the Gods Eye in 43 AC.[7] Qarl threatened Lord Rogar Baratheon with Lady Forlorn when Rogar suggested replacing King Jaehaerys I Targaryen with Princess Aerea Targaryen in 50 AC.[3]

Ser Corwyn Corbray, the brother of Lord Leowyn Corbray, wielded Lady Forlorn during the Dance of the Dragons.[8] Corwyn, one of the regents for Aegon III, was slain by a crossbowman at Runestone after drawing Lady Forlorn on Lord Gunthor Royce in 134 AC.[9]

At the time of the First Blackfyre Rebellion, Lady Forlorn was wielded by Ser Gwayne Corbray of the Kingsguard. In 196 AC during the Battle of the Redgrass Field, Gwayne fought Daemon I Blackfyre, who wielded the Valyrian sword Blackfyre. Eventually, after nearly an hour of fighting Daemon defeated Gwayne.[2]

Lord Corbray wielded Lady Forlorn during the Battle of the Trident in 283 AC. When Lord Corbray was wounded, his younger son, Ser Lyn, took up the sword and killed the man who had wounded his father. Lyn then led the charge against the Dornishmen and killed Prince Lewyn Martell of the Kingsguard. Because of this feat, when their lord father died, the sword was left to Lyn instead of his elder brother Lyonel.[1]

During Lord Petyr Baelish's meeting with the Lords Declarant at the Eyrie, Ser Lyn Corbray threatens Ser Lothor Brune with Lady Forlorn. Petyr uses the aggression to demand concessions from the Lords Declarant. After they leave, Petyr informs Sansa Stark that Lyn is secretly working on his behalf.[1]

My lady has a thirst. Whenever she comes out to dance, she likes a drop of red.[1]

—Lyn Corbray, during the Lords Declarant meeting at the Eyrie

It's said that whenever Blackfyre and Lady Forlorn clashed, you could hear the sound for a league around. It was half a song and half a scream, they say.[2]

—Eustace Osgrey, to Duncan the Tall

In The World of Ice & Fire, the Lady Forlorn of Robar II Royce's era is described to be a Valyrian steel sword. It has been confirmed that "Valyrian steel" should have been removed from the description.[10]