Lem, also known as Lem Lemoncloak,[1] is a one-time soldier.[7] It is unknown if Lem is his given name; according to Tom of Sevenstreams, Lem is named after the yellow cloak he wears.[1] In the television adaptation Game of Thrones, Lem is portrayed by Jóhannes Haukur Jóhannesson.

Lem is known for his large, hooded yellow cloak which is patched with deerskin.[1] He carries a longsword and a dirk on his studded leather belt. Lem's shirt is protected with overlapping steel rings, and he wears a black iron conic helm.[1]

According to a semi-canon source, Lem is part of Lord Beric Dondarrion's royal party sent by Lord Eddard Stark, Hand of the King, to kill Ser Gregor Clegane.[6] Beric's party is ambushed by the Mountain's men in the battle at the Mummer's Ford, however.[10]

Lem and his companions in the brotherhood without banners stumble upon Arya Stark, Gendry and Hot Pie digging in a garden. After some archery from Anguy, they convince the three young travelers to accompany them to the Inn of the Kneeling Man, where Sharna and Husband are familiar with the brotherhood. Arya breaks Lem's nose with a tankard of ale before learning that Harwin of Winterfell is Lem's ally.[1]

Lem's nose heals crookedly as the outlaws travel through the riverlands, visiting Lord Lychester's keep, the Lady of the Leaves, Sallydance, High Heart, Acorn Hall, and Stoney Sept.[11][9] They find Lord Beric Dondarrion in the hollow hill, where Beric tells Sandor Clegane that all of the brotherhood have been knighted. After Sandor strikes down Beric in their trial by combat, Thoros of Myr tasks Lem and Jack-Be-Lucky with tending to Beric's wounds.[5]

Lemtakes part in the battle at the burning septry, where he rides down the Bloody Mummer who killed Kyle.[12]

Lem is skeptical of the ghost of High Heart[11] and he believes that Beric's survival after horrific wounds is due to the healing skill of Thoros, although it is actually magical in nature. Lem is a supporter of the Lord of Light, however. When Sandor returns to the outlaws to demand the return of his gold, Lem suggests that they should kill the Hound and take his horse.[12] Lem argues they should ransom Arya to Ser Brynden Tully at Riverrun as soon as possible, but Beric worries the castle will soon come under attack. Arya decides to escape the outlaws.[2]

Lem participates in the retaliatory hangings of Petyr and Merrett Frey after the Red Wedding.[3] 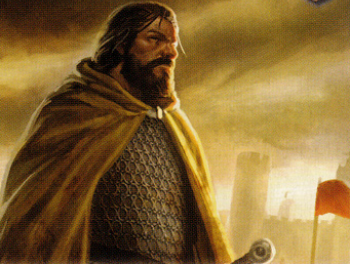 Lem's nose heals poorly.[4] He continues to be a member of the brotherhood after Lady Stoneheart takes command.[13] He is stationed near the inn at the crossroads, hiding in wait in case its orphans need assistance.[14]

Lem leaves the inn to hunt north along the Green Fork in search of the the Mad Dog of Saltpans, as Sandor Clegane is believed to have led a savage sack of the town;[4] in actuality, the raid had been led by Rorge, who had claimed Sandor's hound helm.[15] Lem realizes that the former Brave Companions had doubled back, but he is delayed from returning to the inn by having to avoid a column of knights from House Frey.[4]

While Lem is away, Brienne of Tarth and her companions arrive at the inn and meet Gendry. Rorge also arrive at the inn, however, and Brienne chooses to defend the orphaned children from Rorge's outlaws. Brienne slays Rorge, but she is then attacked by Biter. Gendry saves Brienne's life by killing Biter.[15] Lem decides to wear the Hound's helmet he took from Rorge's corpse, which Thoros opposes. Lem is present when Lady Stoneheart approves the hangings of Brienne, Podrick Payne, and Ser Hyle Hunt, and he implies to Brienne that his wife and daughter are dead.[4]

Dreams, what good are dreams? Fish women and drowned crows. I had a dream myself last night. I was kissing this tavern wench I used to know. Are you going to pay me for that, old woman?[11]

—Lem to the ghost of High Heart

You must be a lackwit, boy. We're outlaws. Lowborn scum, most of us, excepting his lordship. Don't think it'll be like Tom's fool songs neither. You won't be stealing no kisses from a princess, nor riding in a tourney in stolen armor. You join us, you'll end with your neck in a noose, or your head mounted up above some castle gate.[12]

What do a bunch o' bloody peasants know about a lord's honor? We know some about murder, though.[3]

She don't speak. You bloody bastards cut her throat too deep for that. But she remembers.[3]

Thoros: There is nothing good about that helm, nor the men who wore it. Sandor Clegane was a man in torment, and Rorge a beast in human skin.

Thick and heavy, stained here with grass and there with blood, frayed along the bottom and patched with deerskin on the right shoulder, the greatcloak gave the big man the look of some huge yellow bird.[1]

This great lout with the brown teeth is Lem, short for Lemoncloak. It's yellow, you see, and Lem's a sour sort.[1]

Lem, is that you? Still wearing that same ratty cloak, are you? I know why you never wash it, I do. You're afraid all the piss will wash out and we'll see you're really a knight o' the Kingsguard![9]

Even brave men blind themselves sometimes, when they are afraid to see.[12]

—Beric Dondarrion to Thoros of Myr