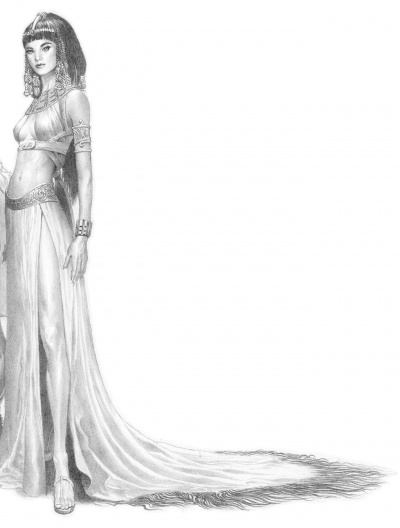 A Lengii woman, by Douglas Wheatley for The World of Ice & Fire

The Lengii are the native people of the island of Leng in the Jade Sea.

The Lengii are the tallest known race of mankind, with some reaching seven or eight feet in height. They are a slender people known for their beauty and having skin the color of oiled teak. They have large eyes golden in color which may grant them superior vision over other races.[1]

The Lengii of old seldom departed their land. They were disinterested with foreign peoples or customs, and likewise prevented outsiders from exploiting their island for its resources.[1]

The Lengii have traditionally been ruled by god-empresses. Legends claim the empresses of old consorted with the Old Ones, gods who are said to have lived deep below their island's subterranean ruins.[1]

Jar Har, sixth sea-green emperor of Yi Ti, conquered Leng, and YiTish settlers pushed the native Lengii back until they only inhabited the southern third of the island. When the settlers broke away from Yi Ti to be ruled by their own god-empresses four centuries ago, however, they apparently made common cause with the Lengii. The first god-empress of the current dynasty, Khiara the Great, was actually pure Lengii (it is unclear if the "current" dynasty is the only dynasty). Khiara took two husbands, one Lengii and one YiTish - a customary pattern followed by her daughters and their daughters in turn.[2]