Lord Commander of the Kingsguard

Lord Commander is the title held by the most senior sworn brother of the Kingsguard,[1] the seven champions and protectors of the Lord of the Seven Kingdoms, the king on the Iron Throne. The title has also been used for the leaders of the Queensguard[2][3] and the Rainbow Guard.[4]

The Lord Commander commands the other six knights of the Sworn Brotherhood of the Kingsguard,[5] and he is a member of the small council.[6] The Lord Commander is appointed by the king, with seniority and ability being factors in the selection.[7]

The spacious apartments of the Lord Commander are located on the highest of the four floors of White Sword Tower, which is part of the Red Keep. During meetings of the Kingsguard, the Lord Commander sits at the end of the shield-shaped table in the Round Room, in the tower's first floor. Whenever they gather, he ritually asks his Sworn Brothers who is protecting the king. The Lord Commander is expected to update entries in the White Book.[1]

Lowborn such as Ser Duncan the Tall[1] and bastards such as Ser Robert Flowers,[8] Ser Addison Hill,[8] and Ser Marston Waters[9] have risen to become Lords Commander. 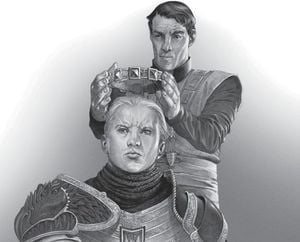 Queen Visenya Targaryen modeled the vows of the Kingsguard upon those of the Night's Watch, and Ser Corlys Velaryon was chosen as the first leader of the new order.[10] The Sea Snake, Lord Corlys Velaryon, was named after his famous great-great-uncle.[11]

King Jaehaerys I Targaryen once chose his Lord Commander, Ser Ryam Redwyne, to be Hand of the King, but the famed knight turned out to be a poor advisor.[11]

Ser Criston Cole, the Lord Commander for King Viserys I Targaryen, disobeyed the king's will after his passing and crowned Aegon II Targaryen instead of Rhaenyra Targaryen.[12] The Kingmaker was slain in the ensuing Dance of the Dragons.[13]

During the regency of the young King Aegon III Targaryen, Ser Robin Massey was named Lord Commander by Aegon but the appointment was later set aside by the Lord Regent and Hand of the King, Lord Unwin Peake, in 133 AC.[9] Aegon denied the appointment of Ser Marston Waters as Hand during the secret siege.[14]

During the War of the Ninepenny Kings, Ser Gerold Hightower took command of the royal forces after the death of the Hand, Lord Ormund Baratheon.[15] Gerold was slain in combat at the tower of joy during Robert's Rebellion.[16] King Robert I Baratheon is mortally wounded by a boar while hunting in the kingswood, and Ser Barristan Selmy is unable to save him.[17] Robert's heir, King Joffrey I Baratheon, and the small council dismiss Barristan as Lord Commander, and the council replaces him with Ser Jaime Lannister,[18] who is on campaign in the riverlands.[19]

Tywin Lannister, Lord of Casterly Rock, expects his eldest son to resign from the Kingsguard and again be his heir, but Jaime remains true to his vows.[5]

Garrett Paege, Josmyn Peckledon, and Lewys Piper squire for the Lord Commander when Jaime marches to restore the king's peace to the riverlands after the War of the Five Kings.[20] Jaime wants Ser Loras Tyrell to command the Kingsguard in his absence from the capital, although Queen Regent Cersei Lannister prefers Ser Osmund Kettleblack.[20]

Barristan, having traveled across the narrow sea, becomes the Lord Commander of the Queensguard of Daenerys Targaryen, Queen of Meereen.[3] 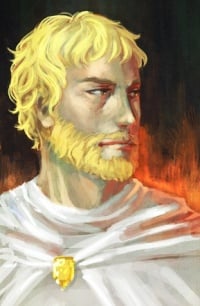 It is unknown under which king the following Lords Commander served: 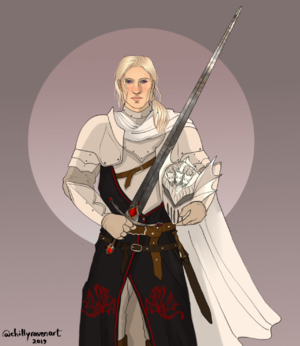 Prince Aemon the Dragonknight, by Chillyravenart ©

Your Grace. The Kingsguard is a Sworn Brotherhood. Our vows are taken for life. Only death may relieve the Lord Commander of his sacred trust.[18]

—Barristan Selmy to Joffrey I Baratheon

The King's Justice must be fearsome, the master of coin must be frugal, the Lord Commander of the Kingsguard must be valiant ... and the master of whisperers must be sly and obsequious and without scruple.[27]

Your Grace, in Westeros the Lord Commander of the Kingsguard sits on the small council, and serves the king with his wits as well as his steel.[28]

You are not my son. You say you are the Lord Commander of the Kingsguard, and only that. Very well, ser. Go do your duty.[5]

The chair behind the table was old black oak, with cushions of blanched cowhide, the leather worn thin. Worn by the bony arse of Barristan the Bold and Ser Gerold Hightower before him, by Prince Aemon the Dragonknight, Ser Ryam Redwyne, and the Demon of Darry, by Ser Duncan the Tall and the Pale Griffin Alyn Connington. How could the Kingslayer belong in such exalted company?[1]