Lord of Strongsong[1][2][3] is a title held by the head of House Belmore, the ruler of Strongsong in the Vale of Arryn.[2] 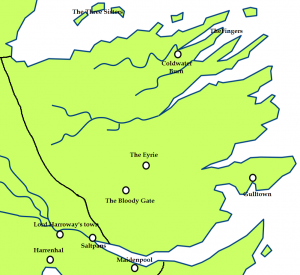 Lord Belmore fought on the side of the First Men in Battle of the Seven Stars.[4]

Lord Benedar Belmore is among the powerful Vale lords to sign the document of the Lords Declarant, which demands the handover of Lord Robert Arryn and the dismissal of his councilors. He is the first of the Lords Declarant to arrive at the Gates of the Moon and begin the blockade, preventing fresh food from going up to the Eyrie.[1]

When the Lords Declarant travel to the Eyrie, Benedar cannot climb the last stage to the castle and has to be drawn up in the basket. During the parley with Lord Petyr Baelish, Benedar is distrustful of the Lord Protector of the Vale and wants the young Lord Robert to leave the Eyrie.[1]

Benedar reconciles with Petyr and is a surprise guest at Lord Lyonel Corbray's wedding in Gulltown, which most of the other Lords Declarant shun.[5]

Benedar attends Lord Robert Arryn's tourney, competing for a spot in the Brotherhood of Winged Knights at the Gates of the Moon. While there, he meets with Petyr Baelish and Lord Gerold Grafton to discuss selling their reserves of food. Benedar believes the current prices are fair, but Petyr wants to wait for the demand to go higher. When Alayne Stone arrives and informs them that the Waynwoods have arrived with Ser Harrold Hardyng, Benedar is stunned to hear that Lord Yohn Royce allowed Harrold come to the tourney.[6]