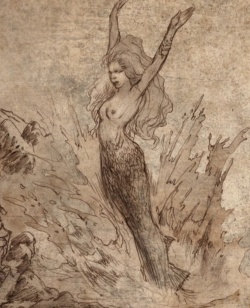 Elenei, depicted as a mermaid

Merlings are legendary aquatic creatures with the upper body of a human and the tail of a fish. Merfolk include mermen, merwives, and mermaids.

Mermaids are featured in Westerosi carvings, place names, and in songs. They are often featured in places near the sea, such as White Harbor.

Legends hold that the Grey King of the Iron Islands wed a mermaid and became king of the western isles and all the sea beyond.[1] The ironmen believe that in the Drowned God's watery halls there are mermaids to attend to every want. The priests of the Drowned God claim the ironmen are closer kin to fish and merlings than other humans.[2]

The Merling King is worshipped as a god; there is a statue of the deity in the House of Black and White in Braavos. The merlings are said to hail their lord by blowing into seashells.[3] Ursula Upcliff called herself the bride of the Merling King.[4] According to legends of House Velaryon, they received their Driftwood Throne from the Merling King to conclude a pact.[5] The helm of Ser Marlon Manderly is modeled after the head of the Merling King.[6] Blackwater Bay contains Merling Rock and the spears of the merling king.[7]

The Winged Knight is said to have been friends with merlings.[8] The legend of Owen Oakenshield claims he drove the merlings into the sea.[9] Maester Theron argues that the Deep Ones are the origin of merling legends.[10] According to legend, the mazemakers of Lorath were wiped out by a maritime enemy, possibly merlings.[11]

Patchface mentions merfolk in some of his cryptic jingles that may have prophetic meaning. According to him the merwives wear nennymoans in their hair and weave gowns of silver seaweed. The mermaids of the Shivering Sea are said to have pale skin and black-scaled tails, and to be far more dangerous than mermaids of southern seas.[12]

The sigil of House Manderly of White Harbor is a white merman with dark green hair, beard and tail, carrying a black trident, over a blue-green field.[13] The Castle Stair, a stepped street in their city, is lighted with marble mermaids cradling bowls of burning whale oil.[14] The Manderlys receive visitors in the Merman's Court within the New Castle.[6] The sigil of a White Harbor knight depicts three silver mermaids on a violet field.[15]

Roro Uhoris claimed that he could tell one port from another just by the way they smelled. Cities were like women, he insisted, as each one had its own unique scent. White Harbor was sharp, salty, and a little fishy like a mermaid.[16]

What happened to Patchface during the two days after the Windproud had broken up is unknown, but the fisherfolk like to say that "a mermaid had taught him to breathe water in return for his seed."[17]

"The Mermaid's Lament" is a sad song.[18] Mermaid's Kiss and the Merling King are ships. One of the boats belonging to the orphans of the Greenblood has a curved wooden tiller shaped like a mermaid. Mermaid's Palace is a small isle off the coast of the Arbor.[19]

When Jeor Mormont, Lord Commander of the Night's Watch, tells Tyrion Lannister of fisherfolk having seen white walkers near Eastwatch-by-the-Sea, a disbelieving Tyrion replies that the fisherfolk of Lannisport often claim of having glimpsed merlings.[20]

In Oldtown, Armen wagers with Mollander that down at the docks they can find sailors who tell of mermaids they have bedded.[21]

The Merling Queen is a courtesan in Braavos. She is never seen without her "Mermaids" to hold her train and do her hair.[22]