Ser Meryn Trant is a knight from House Trant. He is a member of King Robert I Baratheon's Kingsguard. In the television adaptation Game of Thrones he is played by Ian Beattie and takes on some aspects of Ser Boros Blount.

Meryn has droopy eyes and a red beard.[1] As a Kingsguard knight, his armor consists of a shirt of enameled scales chased with gold, a tall helm with a golden sunburst crest, greaves, and gorget and gauntlets and boots of gleaming plate, a heavy wool cloak clasped with a golden lion.[2] 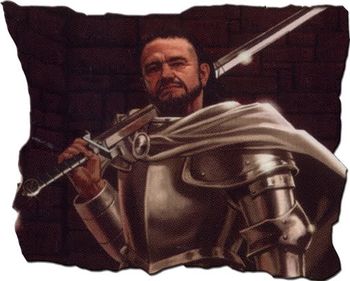 Ser Meryn accompanies King Robert I Baratheon to Winterfell to name his new Hand of the King, Lord Eddard Stark.[1]

Meryn participates in the Hand's tourney at King's Landing, defeating Harwin.[5] He is defeated in the tourney by Ser Loras Tyrell.[4]

Meryn is sent to apprehend Arya Stark when Eddard is arrested, but is prevented from doing so by Syrio Forel.[6] King Joffrey I Baratheon uses him to beat Sansa Stark into obedience.[2] He is present in the throne room when Ser Barristan Selmy is dismissed, and laughs at his former sworn brother's shame.[7]

Ser Meryn rides in the joust during the tourney on King Joffrey's name day. There he breaks two lances with Ser Hobber Redwyne, unhorsing him on the second pass.[8] Meryn survives the riot of King's Landing, when the royal procession is attacked on its return to the Red Keep after seeing Princess Myrcella off to Dorne.[9]

Meryn guards King Joffrey during the Battle of the Blackwater.[10] After the battle, Meryn and the other remaining Kingsguard spend hours knighting more than six hundred men.[11]

Ser Meryn is ordered by Queen Regent Cersei Lannister to bring Sansa Stark to the sept to marry Tyrion Lannister.[12] He is later encountered guarding the Red Keep by Ser Jaime Lannister, Lord Commander of the Kingsguard, during the latter's return to King's Landing, and Meryn is criticized for failing to protect two monarchs in Jaime's absence.[13]

During the trial of Tyrion for the death of King Joffrey, Meryn recounts the story of Tyrion beating Joffrey after the riot and tells the judges of other episodes when Tyrion threatened the life of the king.[14]

Jaime berates Meryn for his willingness to beat Sansa on Joffrey's orders, pointing out that nowhere in the White Book do the Kingsguard swear to beat women and children. When Meryn protests that the Kingsguard are sworn to obey, Jaime counters that their first role is to protect the king, which includes protecting the monarch from themselves, and that he expects the knight to use common sense when his king gives him a questionable command.[3]

Ser Meryn guards the apartments of the Hand of the King after the body of Lord Tywin Lannister is found until the arrival of Queen Cersei.[15]

Ser Meryn is present at the Red Keep when Cersei completes her walk of penance.[16] He guards the Hand's apartments in Maegor's Holdfast on the night of Ser Kevan Lannister's death.[17] 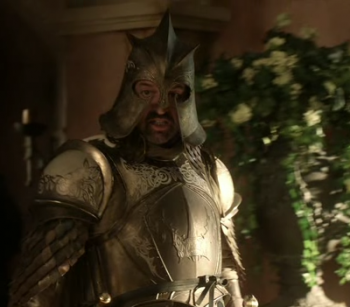 Ian Beattie as Meryn in Game of Thrones.

Sansa: I shall do whatever His Grace commands.

He did not hate her, Sansa realized; neither did he love her. He felt nothing for her at all. She was only a ... a thing to him.[2]