From A Wiki of Ice and Fire
Jump to: navigation, search
For the septon, see Moon (septon). 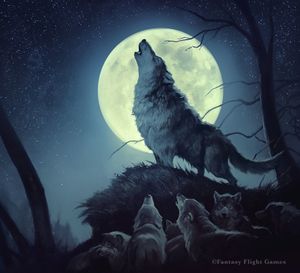 The moon is a natural satellite to the planet of A Song of Ice and Fire. One month can be referred to as a moon[1] or a moon's turn.[2] 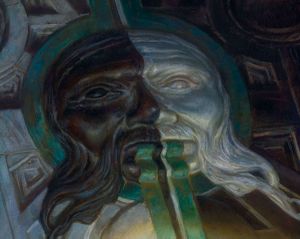 Door of the House of Black and White, by Donato Giancola ©

The sigil of House Wynch depicts a blood moon,[9] while House Egen and House Fell use a crescent moon. The arms of House Pryor include a black moon, and the Harclays' sigil depicts three phases of the moon. House Tarth uses quartered sun-and-moon heraldry.[10][11]

Windows on the dome of the Temple of the Moonsingers in Braavos depict the phases of the moon.[12] The Moon Pool is a pool near the Sealord's Palace in the city.[13] The doors of the House of Black and White depict the face of the moon in ebony and weirwood.[12]

Moonstone is a gemstone named after the moon. The Moonmaid is a constellation.[2] The Moon-Pale Maiden and Moon Mother are deities worshipped in Essos.[14][15]

Moon Boy is the fool of King Robert I Baratheon.[8] The Moonshadow is a courtesan in Braavos who wears only white and silver.[15]

Menstruation can be called moon blood[16][17] or moon's blood.[18][15] Moon tea can be used to prevent pregnancies.[19] A saying in the Seven Kingdoms is to "never drink with Dornishmen when the moon is full."[20] In the westerlands, a black new moon is known as a traitor's moon.[21] Wolves often howl at the moon.[22] 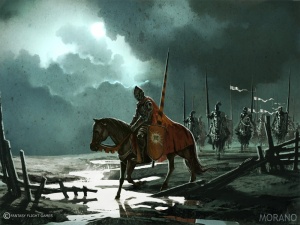 Qartheen believe that dragons were hatched from a second moon that came too close to the sun and cracked, while Dothraki believe that the moon is a goddess, wife to the sun.[23]

According to the myth of Azor Ahai, the face of the moon cracked due to Nissa Nissa's cry of anguish and ecstasy when Azor Ahai drove Lightbringer into her chest to temper the blade.[24]

Red priests believe R'hllor made the sun, moon, and stars to light the way.[25]

Walton Stark was known as the Moon King.[26]

Stories say that when Queen Visenya Targaryen, upset that the title Prince of Dragonstone had been removed from her son Maegor, flew away from King's Landing on Vhagar, the moon turned red as blood when her dragon passed before it.[27]

Autumn Moon was a ship captained by Ser Norman Hightower.[28]

Moondancer was a dragon ridden by Lady Baela Targaryen.[29]

A story told to misbehaving children said that on moonless nights bats would fly from Harrenhal and take the bad children to Danelle Lothston.[11] 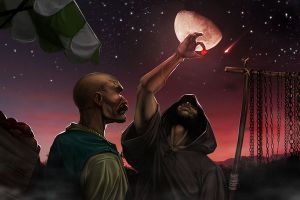 When Ser Waymar Royce faces one of the Others, his adversary's blade of translucent crystal appears alive with moonlight.[30]

Khal Drogo refers to his new bride, Daenerys Targaryen, as the moon of his life.[31]

According to a semi-canon source, House Royce of the Gates of the Moon has a white crescent moon in their sigil.[32] Soldiers rush to battle by the light of a full moon, by Egil Paulsen © Fantasy Flight Games

Doreah: Once there were two moons in the sky, but one wandered too close to the sun and cracked from the heat. A thousand thousand dragons poured forth, and drank the fire of the sun. That is why dragons breathe flame. One day the other moon will kiss the sun too, and then it will crack and the dragons will return.
Irri: You are foolish strawhead slave. Moon is no egg. Moon is god, woman wife of sun. It is known.[23]

Moonlight painted the wet woods in shades of silver and turned the grey peaks white.[34]

The night was strangely beautiful. The moon was a graceful crescent, and it seemed as though he had never seen so many stars.[35]

Splash some blood upon the moon with me, and I promise you a kiss for every kill.[36]

Tyrion had never seen a bigger moon. Monstrous, swollen, it looked as if it had swallowed the sun and woken with a fever. Its twin, floating on the sea beyond the ship, shimmered red with every wave.[37]

The moon was a crescent, thin and sharp as the blade of a knife.[38]

Up above the treetops, a crescent moon was floating in a dark sky, half-obscured by mist, like an eye peering through a veil of silk.[39]