Mord is a gaoler of House Arryn who is in charge of the upkeep and maintenance of the sky cells of the Eyrie. In the television adaptation Game of Thrones, he is played by Ciaran Bermingham.[1]

Mord is a large man of twenty stone.[2] He has rotting brown teeth and small dark eyes.[2] The left side of his face is scarred and lopsided from an axe which cut off an ear and part of his cheek.[2][3] Mord has a heavy white belly and thick fingers.[2]

A brutish man, Mord is fond of tormenting his prisoners, telling them they are going to fall out of the sky cells to their deaths.[2] Tyrion Lannister considers Mord to be an oaf who is often tricked.[2]

Mord's clothes fit poorly and have a rank, ripe smell.[3] He wears steel-toed boots and threatens prisoners with a leather strap[2] and a lash.[3] 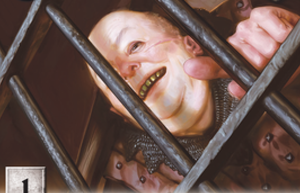 When Tyrion Lannister is brought up to the Eyrie, Lady Lysa Arryn orders Ser Vardis Egen to have the dwarf thrown into the sky cells. Mord claims Tyrion's magnificent shadowskin cloak. The gaoler repeatedly taunts Tyrion, dropping the prisoner's food over the side on one occasion. Mord beats Tyrion with his leather strap, but Tyrion bribes the turnkey with the promise of gold if Mord tells Lysa that Tyrion wishes to confess his crimes. Mord reluctantly returns the cloak to Tyrion.[4]

Within the High Hall, Tyrion publicly demands trial by combat,[2] and his champion, Bronn, ends up slaying Lysa's representative, Ser Vardis.[5] Before leaving the Eyrie, Tyrion pays Mord his purse of gold and offers another reward if he ever comes to Casterly Rock.[4]

Lord Petyr Baelish has Mord torture Marillion, a prisoner in the sky cells. Fat Maddy states that Mord has removed both pinkies and a ring finger from the singer's hands. Marillion falsely confesses to Lord Nestor Royce that he killed Lysa.[3]

When the Arryn court descends to the Gates of the Moon before the onset of winter, Ser Lothor Brune helps Mord load supplies into buckets in the winch room. Mord is one of the last to leave the Eyrie, as he is tasked with butchering the oxen in the winch room before he leaves.[7] 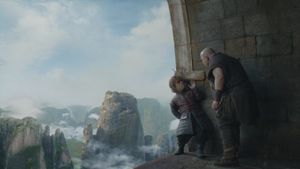 
Tyrion: I will put my promise in writing.
Mord: Writing down gold. Much gold.

The turnkey was twenty stone of gross stupidity, with brown rotting teeth and small dark eyes.[2]

Mord may be a reference by George R. R. Martin to Mord, a fictitious executioner played by Boris Karloff in the movie Tower of London.