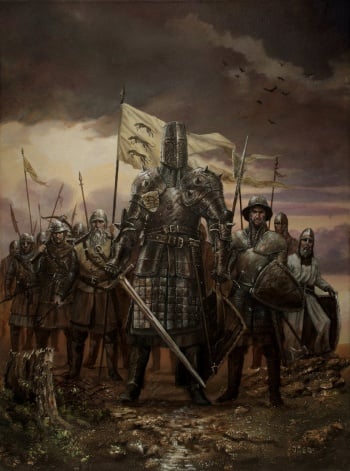 Ser Gregor Clegane with the Mountain's men, by Nordheimer ©

The Mountain's men[1][2] are men-at-arms of the westerlands in service to Ser Gregor Clegane, the Mountain That Rides.

The Mountain's men are a dangerous, unsavory bunch,[3] grim and foul mouthed.[4]

The best that can be said for Gregor's men is that they are not quite as vile a bunch as the Brave Companions.[4] Sandor Clegane refers to his brother's soldiers as Gregor's "pet rats". According to Sandor, Gregor once killed one of his men for snoring.[5] Gregor never brings his men-at-arms to court in King's Landing,[5] the only exception is Joss Stilwood who serves as his squire.[6] They often refer to Gregor simply as "Ser".[6][2][4] 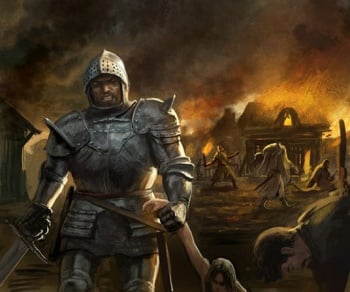 After Tyrion Lannister is abducted by Catelyn Stark,[7] Lord Tywin Lannister sends the Mountain's men across the Red Fork into the riverlands under the guise of brigands. They ravage the holdfasts of Sherrer, Wendish Town, and the Mummer's Ford and draw House Tully forces away from Riverrun and the Golden Tooth.[8]

When Lord Eddard Stark, the Hand of the King, dispatches a party of men led by Beric Dondarrion to execute Ser Gregor Clegane for his crimes,[8] Tywin ambushes them at the Mummer's Ford. When Beric and his men attempt to retreat across the Red Fork, Gregor's men take them in the rear.[9] 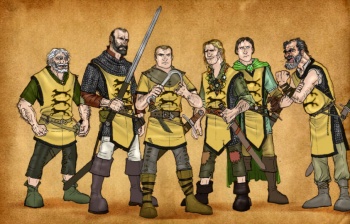 As the band is foraging and raiding, the Tickler questions various smallfolk through his torture. Among the people captured are Hot Pie, Gendry, and Arya Stark of Winterfell, although they are oblivious to her true identity. Raff slays Lommy.[3] Arya quickly comes to know Gregor's men. The men-at-arms take their surviving prisoners to serve Lord Tywin Lannister at Harrenhal.[3]

Arya hears rumors that Tywin sent Gregor and the Brave Companions to destroy the northern host of Lord Roose Bolton, who has occupied the ruby ford.[6] The Mountain's men skirmish several times with the brotherhood without banners, and they lose four men to Lord Beric Dondarrion's night raids before returning to Harrenhal, taking up residence in the Wailing Tower.[6] While in the guise of a common servant, Arya overhears Chiswyck speak of the earlier rape of a brewer's daughter, Layna. Arya orders Jaqen H'ghar to kill Chiswyck.[6] Lord Bolton and Vargo Hoat of the Brave Companions orchestrate the fall of Harrenhal after Tywin's departure from the castle.[14]

Lord Tywin attempts to return to the westerlands by crossing the Red Fork. During the Battle of the Fords, Gregor leads the assault at the Stone Mill, where so many of his men fall that the river is nearly dammed. Gregor and a handful of his best soldiers gain the west bank of the river, but they are forced to retreat by the reserves of Ser Edmure Tully.[15] Messengers from Bitterbridge inform Tywin of a new alliance with House Tyrell, and he marches his army to King's Landing for the Battle of the Blackwater.[16][17]

After hearing that Ser Jaime Lannister has escaped from Riverrun, Tywin has Gregor, Samwell Spicer, and the brothers Plumm discretely search for his eldest son in the riverlands.[18]

Lord Bolton orders Robett Glover and Ser Helman Tallhart from Harrenhal to attack Duskendale, so Tywin sends Lord Randyll Tarly to intercept them.[19] The northern survivors of the battle at Duskendale are harried in their retreat to the kingsroad by Gregor's men.[20]

Lord Bolton leaves Harrenhal to Vargo when he departs for the Twins.[21] Roose's rearguard is attacked by the Mountain in fighting at the fords of the Trident.[22]

Following the Red Wedding, Tywin orders Gregor to eliminate the Brave Companions and put Harrenhal to the sword.[23] Gregor seizes the ruby ford and then leads the capture of Harrenhal.[24] Roose's rearguard is attacked by the Mountain in fighting at the fords of the Trident.[22]

Ser Gregor and his men retake Harrenhal, which Roose Bolton has abandoned to Vargo Hoat. Inside, Gregor's men slaughter the inhabitants and defenders except for the cook who opens the gate, the castle smith Ben Blackthumb, and some women like Pia whom the Mountain and his men rape repeatedly.[2]

Leaving Polliver as Harrenhal's castellan,[4] Gregor rides for King's Landing to serve Queen Regent Cersei Lannister.[25] When Tyrion Lannister, accused of murdering King Joffrey I Baratheon at his royal wedding, requests trial by battle, Cersei announces that Gregor will be her champion. Gregor is poisoned with manticore venom[26] during his duel with Tyrion's champion, Prince Oberyn Martell, who is slain in the fight.[25]

Polliver and the Tickler bring a pimply squire to the crossroads inn so the youth can sleep with a prostitute. They encounter Arya Stark and Sandor Clegane, Gregor's brother, however, and Sandor accuses them of intending to "tickle the innkeep". A fight breaks out when they attempt to capture Sandor, and the pair kill the three Mountain's men.[2] 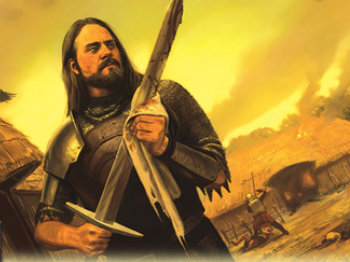 Gregor dies in King's Landing while under the care of Qyburn.[27] The remnants of Gregor's men-at-arms, including Raff the Sweetling, Dunsen, and Shitmouth, remain stationed at Harrenhal.[28] When Jaime arrives there on his way to Riverrun, a handful of Gregor's men emerge from the castle's towers to watch him dismount. Shitmouth informs Jaime that Polliver was killed by Sandor at the crossroads inn, leaving no one in charge at Harrenhal.[4]

When Jaime informs Gregor's men that they can either ride with him to the siege of Riverrun or join the Holy Hundred of Ser Bonifer Hasty, the men state Gregor promised rich rewards for those that rode with him. Jaime tells them to take any grievances up with Cersei.[4] Before he leaves Harrenhal, Jaime orders Ser Ilyn Payne to behead one of Gregor's men who tried to rape Pia, despite the perplexed man's protests.[4] Jaime tasks Ser Ronnet Connington, Knight of Griffin's Roost, with bringing the captive Ser Wylis Manderly to Maidenpool.[29] Some of Gregor's men, including Dunsen, accompany Red Ronnet.[30][31]

After resolving the siege of Riverrun, Jaime allows Ser Robin Ryger and Ser Desmond Grell to take the black and journey to the Wall. A dozen Mountain's men led by Rafford are ordered to escort Robin and Desmond to Maidenpool.[32]

Twenty men accompany Red Ronnet from Maidenpool to King's Landing, most of them the Mountain's former men.[33] Within a day one is accused of murder and another of rape; Lord Randyll Tarly executes the murderer and gelds the raper.[33] Randyll suggests that Gregor's men be sent to the Wall, and Lord Mace Tyrell, the new Hand of the King, states he would not suffer such men in the City Watch. Lord Regent Kevan Lannister decides not to exile them, however, as the Iron Throne needs loyal swords against the new threat of the Golden Company after their invasion of the stormlands. Kevan tells Grand Maester Pycelle and Ser Harys Swyft to hire the Mountain's men if they feel they need guards against House Tyrell.[33]

Raff the Sweetling is among Harys's guard in Braavos, where he is killed by Mercy.[34]

At Wendish Town, the people sought shelter in their holdfast, but the walls were timbered. The raiders piled straw against the wood and burnt them all alive. When the Wendish folk opened their gates to flee the fire, they shot them down with arrows as they came running out, even women with suckling babes.[8]

Varys: You are quite certain these were more than brigands?
Raymun: Brigands, Lord Varys? Oh, they were brigands, beyond a doubt. Lannister brigands.[8]

They rode down my 'prentice boy. Chased him back and forth across the fields on their horses, poking at him with their lances like it was a game, them laughing and the boy stumbling and screaming till the big one pierced him clean through.[8]

Cersei: And someone needs to set Harrenhal to rights. We have urgent need of Wylis Manderly, assuming he is still alive and captive, but the garrison has not replied to any of our ravens.
Jaime: Those are Gregor's men at Harrenhal. The Mountain liked them cruel and stupid. Most like they ate your ravens, messages and all.[4]

A handful of Ser Gregor's men emerged from the towers to watch him dismount; hard-eyed, hard-mouthed men, the lot of them. They would have to be, to ride beside the Mountain.[4]

The only peace Ser Gregor's lot had ever given anyone was the peace of the grave.[4]