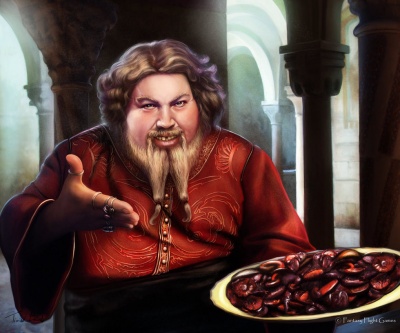 A mushroom or a toadstool is a fungus similar to real world mushrooms. Some varieties are edible while others are poisonous.[1]

Mushrooms are said to spring up after rainfall.[2][3] Mushrooms are used in various food dishes in Westeros and Essos.[4][1]

Toxic mushrooms can be used as a poison. They are not said to be particularly painful, only causing some cramping in the gut and a sudden ache behind the eyes, but they kill quickly.[1] Greycap is a poison made from toadstool.[5]

According to legend, the son of an Andal king was cooked by the Rat Cook into a pie with onions, carrots, mushrooms, pepper, salt, bacon, and wine. The pie was then served to the king.[6]

Capons stuffed with onions, herbs, mushrooms, and roasted chestnuts were served at the wedding tourney at Whitewalls.[7]

Ordello, a magister of Pentos, was poisoned by a mushroom.[1]

Fat mushrooms are among the foods served at the crossroads inn.[8]

Queen Cersei Lannister recalls that the boar which had killed her husband, King Robert I Baratheon, was served at his funeral feast after being cooked in apples and mushrooms.[9]

A broth of mushrooms and leeks is served to the Tyrells at the Red Keep,[17] and a creamy soup of mushrooms and buttered snails is the first dish at the royal wedding of King Joffrey I Baratheon.[18] Mushrooms are among the plain food served by Ravella Smallwood to the brotherhood without banners.[19]

Venison stuffed with leeks and mushrooms are served at Darry.[20] While imprisoned at Sunspear, Arianne Martell eats grape leaves stuffed with a mélange of raisins, onions, mushrooms, and dragon peppers.[21] Mushroom soup is part of the feast prepared at the Gates of the Moon.[22]

While in Illyrio's manse, Tyrion Lannister picks seven poisonous mushrooms from the garden and stores them in one of his boots. Illyrio Mopatis then serves Tyrion a dish of mushrooms kissed with garlic and bathed in butter, telling Tyrion the taste is exquisite. Tyrion grows suspicious, thinking they are poisonous although in reality they are not. Even after witnessing the magister eat a mushroom, Tyrion helps himself to heron and herring instead.[1]

Bran Stark sees grey mushrooms spotting from the three-eyed crow's brow and cheeks.[24] Bran notes that a hundred kinds of mushrooms grow under the hill.[25]

Lord Wyman Manderly serves three great pork pies, the ingredients of which include mushrooms, at the wedding feast of Ramsay Bolton and "Arya Stark" at Winterfell.[26]

My sister has mistaken me for a mushroom. She keeps me in the dark and feeds me shit.[28]

Better a mushroom than a sword through your neck, is it not so? Why die with the taste of blood in your mouth when it could be butter and garlic?[1]