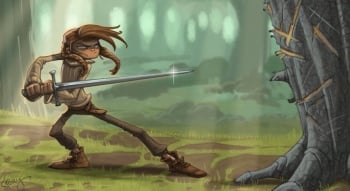 Needle is a small, slender sword owned by Arya Stark.[1]

The thin sword is suitable to Arya's slight build and the style of fencing used by bravos of the Free Cities.[1]

Before leaving for the Night's Watch, Jon Snow commissions Mikken to make the sword for his sister, Arya Stark. The girl names it Needle as an ironic reference to her hatred of needlework.[1]

While travelling north, Arya continually practices at swordplay. She loses the sword to Polliver when she is captured by Ser Gregor Clegane and the Mountain's men in the riverlands.[4] This theft earns Arya's fierce enmity, thus she adds him to her prayer kill list. Practicing with a broken broomstick while at Harrenhal, she refers to her swordplay as needlework.[5]

Arya arrives at the inn at the crossroads in the custody of Sandor Clegane. There she spots Polliver carrying Needle, accompanied by the Tickler. Arya and the Hound cross these two names off her list, and Arya retrieves her sword.[6]

When Arya has to give up all her possessions to train to become a servant of the Many-Faced God, she cannot bring herself to give up Needle. She hides the sword in a crack in the stairs leading to the House of Black and White.[7]

Arya: It's so skinny.
Jon: So are you. I had Mikken make this special. The bravos use swords like this in Pentos and Myr and the other Free Cities. It won't hack a man's head off, but it can poke him full of holes if you're fast enough.[1]

Needle was Robb and Bran and Rickon, her mother and her father, even Sansa. Needle was Winterfell's grey walls, and the laughter of its people. Needle was the summer snows, Old Nan's stories, the heart tree with its red leaves and scary face, the warm earthy smell of the glass gardens, the sound of the north wind rattling the shutters of her room. Needle was Jon Snow's smile.[7]

The Many-Faced God can have the rest, but he can't have this.[7]