Norvos, called Great Norvos by its people,[1] is one of the nine Free Cities. It lies in the interior of Essos, between Pentos and Qohor. 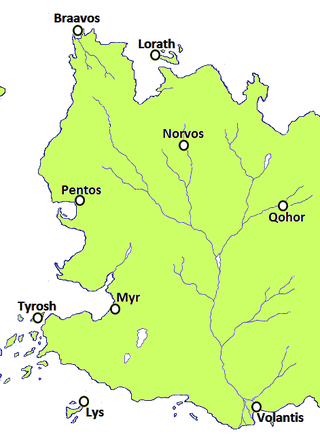 Norvos sits among the Hills of Norvos, upon the eastern banks of the river Noyne, a tributary of the massive Rhoyne, and is surrounded by limestone hills, dark forests of oak, pine, and beech.[1] Located between Pentos and Qohor, it serves as a gateway for caravans and travelers going east-west on the ancient Valyrian roads, with the ruins of Ghoyan Drohe to the southwest and Qohor to the southeast.[2] Norvos is located in a land of rolling hills and terraced farms, surrounded by small walled villages[3] that support the larger city.[4]

The domains of Norvos stretch as far as the western bank of the Darkwash to the east and the Upper Rhoyne to the west. The Noyne is ruled by Norvoshi river galleys as far south as the ruins of Ny Sar, where she joins the Rhoyne. The city also claims dominion over the Axe upon the Shivering Sea, though the Ibbenese are known to dispute this claim, often bloodily.[1]

Norvos is made up out of two parts, joined only by a massive stone stair, known as the Sinner's Steps. The high city, where the ancient nobility of Norvos lives, is ringed about by mighty stone walls,[1] and located on the tallest hill in the region.[6] Here, the great fortress-temple of the bearded priests is located.[1]

The lower city is located three hundred feet below, at the base of the hill, by the river,[6] spread out along the muddy shores. It is defended by moats, ditches, and a timber palisade, overgrown with moss. The riverfront is lined with wharves, brothels, and beer halls.[1] While the upper city is grim, the lower city is lively.[1]

Norvos's three bells govern every aspect of the lives of those in the city. The bells tell the Norvoshi when to rise, sleep, work, rest, when to take arms, when to pray, and when they are permitted to have carnal relations.[1] Each bell has its own distinctive 'voice' and name:[1][6]

Lomas Longstrider counts the bells of Norvos as one of his nine Wonders Made by Man.[1]

Norvos is a theocracy. While it has a council of magisters, its members are chosen by the bearded priests, who speak for their god and wield the true power in the Free City.[1] The magisters give lavishly to passing Dothraki khals, so their khalasars will not savage the city.[7] Among the Norvoshi only the priests are allowed beards. The priests wear hair shirts and untanned hides. Once initiated, these men are forbidden to cut or shave their hair. They practice ritual flagellation as part of their worship. The name of the god worshipped by the Norvoshi is known only to initiates.[1]

The freeborn of the city, both noble and lowborn, favor long mustachios; Byan Votyris, for instance, dyes his mustachio blue and sweeps it to his ears.[8] Norvoshi women shave off all of their hair, though noblewomen don wigs, especially when in the company of men from other lands and cities.[1] Some Norvoshi women wear dresses with squirrel collars.[6] The Norvoshi do not foster children.[9]

Slaves are also shaved bare. There are whispers of torchlit cellars where slave women mate with wolves.[1]

Norvoshi enjoy wintercakes and nahsa, a drink of fermented goat's milk which can be laced with honey.[6] Once a year, there is a festival in Norvos that features bears dancing down the Sinner's Steps.[6]

Doro Golathis is a historian from Norvos.[10] 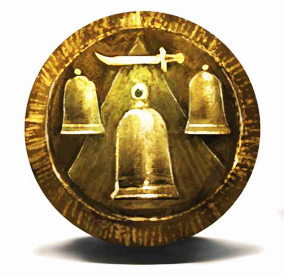 A coin of Norvos, as depicted by Nutchapol Thitinunthakorn in The World of Ice & Fire

The Norvoshi are well known for their tapestries.[11][4] Norvos is involved in trade with Lorath,[12] but rarely the Seven Kingdoms.[13] Caravans are known to pass through the city.[14]

The original settlers of Norvos are unknown, but they were not Rhoynar. Some theorize they were mazemakers or Ibbenese, but most believe they were Andals. Hairy men out of the east are said to have driven these original villagers away, but these hairy men were eventually expelled by Prince Garris of Ny Sar. The Rhoynar did not remain, however, preferring instead the warmer lower Rhoyne.[1]

Modern Norvos, like Qohor and Lorath, was founded following a religious schism in the Valyrian Freehold. Dissidents found the religious tolerance of the Freehold intolerable, so the sect of the bearded priests founded Norvos as a theocracy where the "true faith" would be practiced.[1][15]

Norvos came into conflict with Lorath when Qarlon the Great, trying to become King of All Andals, expanded his domain to the Axe and the headwaters of the Upper Rhoyne and Noyne. The Norvoshi closed the river, and Qarlon came forth to attack them. Two battles were lost by Norvos in the hills, leading Qarlon to march against the city. According to The Fires of the Freehold, a hundred dragons from the Valyrian Freehold descended upon the Andals laying siege to Norvos. Qarlon was burned with his army, and Lorath followed shortly thereafter, in the Scouring of Lorath.[12]

During the Century of Blood after the Doom of Valyria, Norvos and Qohor allied together against Volantis. They destroyed much of the Volantene fleet which had control of the Rhoyne in a battle involving fire galleys on Dagger Lake.[16][17][18] Since then, though the bearded priests are known to regard the Black Goat of Qohor as a demon, Norvos and Qohor have been allies more often than they have been enemies.[17]

Prince Daemon Targaryen and Lady Laena Velaryon visited Norvos and other Free Cities after their wedding.[19]

Doran Martell, Prince of Dorne has visited Norvos,[20] and he is married to Lady Mellario of Norvos, with whom he had three children.[21] Doran is guarded by Areo Hotah, a Norvoshi who was trained by the bearded priests.[6] Already angered by the fostering of Prince Quentyn Martell at Yronwood, Mellario became estranged from Doran and returned to Norvos when her husband planned to send Princess Arianne Martell to Tyrosh.[22] Areo remained with Doran at Sunspear, however.[6]

Areo Hotah, the captain of Doran Martell's guards, is from Norvos, where he was raised and trained.[6]

As punishment for his part in the conspiracy to crown Myrcella Baratheon, Ser Andrey Dalt is sent to serve Lady Mellario for three years in Norvos.[20]