The port of Qarth.

The port of Qarth is one of the known world's great ports.[1]

Horseshoe-shaped and several miles long, the port of Qarth is situated in a sheltered harbor.[1] Ships from the Summer Isles, Westeros, and the Free Cities are permitted to dock at the far side of the harbor.[1]

The port's streets are lined with winesinks, warehouses, gaming dens, brothels, and temples. Winesinks, warehouses, and gaming dens line the streets, cheek by jowl with cheap brothels and the temples of peculiar gods. Buying and selling goes on all day and night at the waterfront marketplace, and goods might be had for a fraction of what they cost at the city's bazaar.[1]

Cutpurses, cutthroats, spellsellers, and moneychangers mingle in the crowd. Old women sell flavored waters and goat's milk from glazed ceramic jugs strapped to their shoulders. Seamen from half a hundred nations wander amongst the stalls, drinking spiced liquors and trading jokes in their languages. The air smells of salt and frying fish, of hot tar and honey, of incense and oil and sperm.[1] 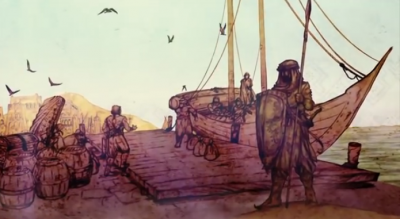 A ship docked at the port of Qarth.

When Daenerys Targaryen decides to flee Qarth she goes down to the docks to attempt to book ship passage to Westeros. As she and her companions pass the long stone quays reserved for the ships of the Thirteen, she sees chests of saffron, frankincense, and pepper being off-loaded from Xaro Xhoan Daxos's ornate Vermillion Kiss.[1] Casks of wine, bales of sourleaf, and pallets of striped hides are trundled up the gangplank onto the Bride in Azure, to sail on the evening tide. A crowd has gathered around the Spicer galley Sunblaze to bid on slaves from Astapor. At the far end of the harbor, Daenerys dismounts beside a gaming pit where a basilisk is tearing a dog to pieces amidst a shouting ring of sailors.[1]

Strong Belwas and Arstan Whitebeard save Daenerys from an attempt by the Sorrowful Men to assassinate her with a manticore. Daenerys and her followers depart the port aboard Balerion, Meraxes and Vhagar, intending to sail to Pentos.[1]

Qarth was one of the world's great ports, its great sheltered harbor a riot of color and clangor and strange smells.[1]