The Princess of Dorne was the unnamed ruler of Dorne during the reign of King Aerys II Targaryen. She was the mother of Doran, Elia, and Oberyn Martell. Her brother was Prince Lewyn Martell of the Kingsguard. 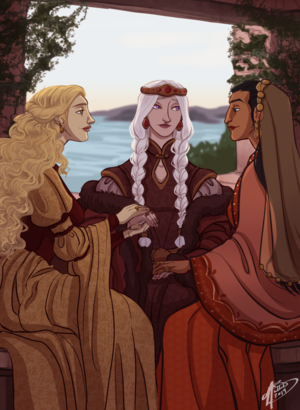 The Princess of Dorne with Rhaella Targaryen and Joanna Lannister

The Princess was one of the ladies-in-waiting of Princess Rhaella Targaryen. She became friends with Joanna Lannister.[4][N 2]

In 270 AC, during a visit to Sunspear, King Aerys II Targaryen told the Princess that he would "make the Dornish deserts bloom" by digging a great underground canal beneath the Red Mountains to bring water down from the rainwood. But like most of his grandiose plans, it was quickly forgotten.[6]

Several years later, the Princess was accompanied on a journey by her daughter Elia, her younger son Oberyn, and her consort. From Dorne they travelled to several potential suitors for both Elia and Oberyn. Amongst the places they visited were Starfall, the Arbor, Oldtown, the Shield Islands, Crakehall, and finally Casterly Rock.[4] Although she had learned of Joanna Lannister's death in childbirth while at Oldtown in 273 AC, the Princess decided to travel onwards to Casterly Rock. Oberyn believes that his mother had planned with Joanna to marry either Elia or Oberyn to one of Joanna's twins, Jaime and Cersei, since there had been an empty cabin on their ship, meant for someone of high birth. Waiting until it was politely decent, the Princess eventually broached the subject of marriage to Lord Tywin Lannister, Joanna's husband. She first suggested a match between Cersei and Oberyn, next a match between Elia and Jaime. Tywin refused both matches brusquely, informing the Princess how Cersei was meant to marry the crown prince, Rhaegar Targaryen. When Tywin suggested the new-born Tyrion as betrothed to Elia instead, the Princess took the suggestion as an insult.[4][7][8]

In 279 AC, the Princess succeeded in betrothing Elia to Rhaegar.[7][6] By the time Elia married the prince in early 280 AC,[6] the Princess had already died.[N 3] On her deathbed, she revealed to her son Oberyn how Tywin Lannister had brusquely refused her suggestions for a betrothal.[4]

Tyrion: Well, Prince Rhaegar married Elia of Dorne, not Cersei Lannister of Casterly Rock. So it would seem your mother won that tilt.
Oberyn: She thought so, but your father is not a man to forget such slights.[4]

Doran: Instead I mean to take you with us to the Water Gardens. There are lessons there if you have the wit to see them.


Doran: Aye. I told the story to Ser Balon, but not all of it. As the children splashed in the pools, Daenerys watched from amongst the orange trees, and a realization came to her. She could not tell the highborn from the low. Naked, they were only children. All innocent, all vulnerable, all deserving of long life, love, protection. 'There is your realm,' she told her son and heir, 'remember them, in everything you do.' My own mother said those same words to me when I was old enough to leave the pools. It is an easy thing for a prince to call the spears, but in the end the children pay the price. For their sake, the wise prince will wage no war without good cause, nor any war he cannot hope to win.[9]
—Doran Martell and Obara Sand