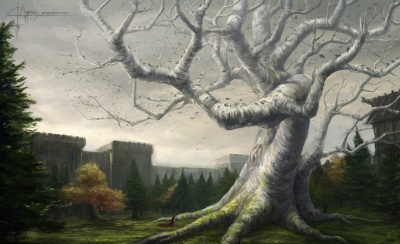 The godswood of Raventree Hall, with its enormous weirwood and hundreds of ravens - by Elena María Vacas

Raventree Hall is the seat of House Blackwood in Blackwood Vale in the riverlands. The castle is located north of Riverrun, southwest of Oldstones, and west of Fairmarket. Ironman's Bay is to the northwest.[2][3]

Raventree has high, ancient stone walls with moss climbing up them. There are two huge, square towers flanking the gate and a square tower at each angle in the wall. It is also defended by a deep moat lined with stone. Inside the walls are a muddy outer ward and a cavernous timber keep.[1]

Lord Blackwood's solar is large and airy, with great beams of dark oak. Wool tapestries adorn its walls, while latticework doors with panes of diamond-shaped yellow glass overlook the godswood. It contains a high-backed chair.[1]

The castle's godswood contains a dead, ancient weirwood of colossal size. Every evening at dusk hundreds of ravens come and roost all night on the dead weirwood as they have for thousands of years.[1] A nearby rise overlooking a stream gives a view of two of Raventree's gates.[1]

The Blackwoods made Raventree their seat in the riverlands after they were driven from the wolfswood by the Kings of Winter.[4]

The Blackwoods claim that Raventree's great weirwood was poisoned by the Brackens.[1]

Lord Blackwood hosted Queen Alysanne Targaryen and Princess Daella Targaryen when the princess was fifteen. Daella was charmed by Royce Blackwood, but refused to marry him after learning the Blackwoods followed the old gods.[6]

Widow Fairs were held at Raventree after the Dance of the Dragons.[7] The bones of Ser Addam Velaryon were stored by Lord Benjicot Blackwood at Raventree for eight years after the Second Battle of Tumbleton, until Lord Alyn Velaryon had his brother's remains interred at Driftmark in 138 AC.[8]

During the War of the Five Kings, the stronghold is taken by Lord Tywin Lannister and Ser Kevan Lannister due to the absence of Lord Tytos Blackwood, who is at Riverrun.[9]

Following the Battle of the Camps, Tytos is allowed to depart Riverrun by Robb Stark, King of the Trident. Tytos leads the liberation of Raventree Hall.[10]

Ser Garth Greenfield is held captive in the castle.[11]

In the wake of the Red Wedding and the submissions of Riverrun and Seagard, Raventree Hall is the last castle in the riverlands refusing to declare for King Tommen I Baratheon. Jaime Lannister goes to Raventree and negotiates the surrender of Lord Tytos, taking his son Hoster as a hostage to ensure good behavior.[1] Tytos intends to have the bones of Lucas Blackwood, a son who was killed at the Red Wedding, buried beneath Raventree's great weirwood.[1]

My hall might lack for food, but never for courtesy.[1]