Red Fork
The riverlands and the location of the Red Fork

The Red Fork is one of the three main rivers of the Trident in the riverlands, the other two being the Blue Fork and the Green Fork. It is named after the mud and silt from the western mountains;[1] Ser Brynden Tully considers the red mud to be colored Tully red.[2]

The Red Fork's headwaters are in the hills near Hornvale and Deep Den in the westerlands. It then flows northeast past Pinkmaiden, the Mummer's Ford, Sherrer, and the Stone Mill. Upstream from Riverrun, the river makes a wide loop and the waters become shallower and muddier.[3] The west bank of this stretch is higher and more wooded than the east bank.[4] The Red Fork is joined by the swifter Tumblestone at Riverrun. The Tullys are able to open sluice gates on the third side of their castle, turning it into an island.[5]

While the deeper and faster Tumblestone is blue and white in color, the placid and wider Red Fork is muddy red and brown.[9] It meanders with loops and bends, islands and sandbars.[10] South of the Inn of the Kneeling Man, the river is broad but shallow. Its banks are all mud and reeds.[11] The river road follows much of the course of the Red Fork.[12]

Axel Tully constructed Riverrun at the juncture of the Tumblestone and the Red Fork on land granted to him by Armistead Vance.[13]

During Aegon's Conquest, Torrhen Stark, the King in the North, submitted to Aegon the Conqueror along the shores of the Red Fork of the Trident.[14] The Inn of the Kneeling Man is said to be where Aegon accepted Torrhen's surrender.[11]

During the Dance of the Dragons, Lord Jason Lannister was slain by Pate of Longleaf in the Battle at the Red Fork.[15] Sallydance on the Red Fork was attacked by Prince Aemond Targaryen and his dragon Vhagar during the civil war.[8] 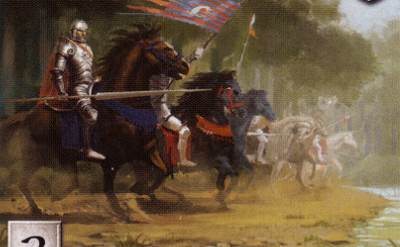 Ser Gregor Clegane raids Wendish Town, Sherrer, and Mummer's Ford, but retreats across the Red Fork back to the westerlands before Ser Raymun Darry can respond. The Hand of the King, Lord Eddard Stark, sends Lord Beric Dondarrion to bring Gregor to justice,[16] but Beric's force is ambushed at the Mummer's Ford by the Mountain's men after crossing the river, however.[17] Marq Piper and Karyl Vance retaliate by raiding lands of the westermen across the Red Fork.[18]

The army of Robb Stark marches south and defeats the westermen at Riverrun in the Battle of the Camps, with Ser Forley Prester leading the survivors south of the Red Fork.[5]

Returning from Storm's End, Catelyn Stark crosses the Red Fork at a ford south of Riverrun. Her brother, Ser Edmure Tully, fortifies the river to prevent Lord Tywin Lannister from crossing;[3] the rivermen successfully defeat Tywin's attempted crossing in the Battle of the Fords.[4]

Brienne of Tarth, Ser Cleos Frey, and Ser Jaime Lannister travel along the Red Fork east from Riverrun as far as the Inn of the Kneeling Man, soon after which they head inland.[19][11] The inn's cook mentions that outlaws have been preying where the channel has been silting up by a couple of sunken boats, as well as further downstream around the Skipping Stones and Red Deer Island.[11]

After Lord Hoster Tully dies, his body is burned in a funeral pyre in the Red Fork.[9]

Emmon Frey and Forley Prester are encamped south of the Red Fork during the siege of Riverrun. To prevent escape, the besiegers throw a boom across the river downstream of the castle, with Manfryd Yew and Raynard Ruttiger defending the boom.[20] Ser Brynden Tully swims under Riverrun's Water Gate in the night and presumably escapes down the Red Fork.[21]

The Red Fork was wide and slow, a meandering river of loops and bends dotted with tiny wooded islets and frequently choked by sandbars and snags that lurked just below the water's surface.[22]