From A Wiki of Ice and Fire
(Redirected from Red priests)
Jump to: navigation, search 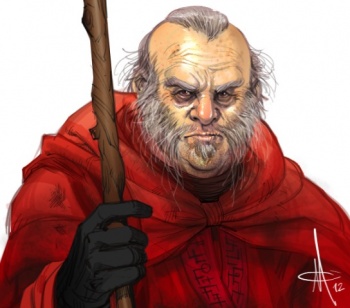 Thoros of Myr, a red priest, by Matt Olson ©

Red priests are the clergy of the religion of R'hllor, called so because of the loose, crimson robes they wear. Red priests, who may be male or female, administer the last kiss to deceased followers of the Lord of Light.[1]

They are a common sight in Essos, as the faith of R'hllor's influence is more widespread and children are sometimes given to temples of R'hllor to be raised into the priesthood. Red temples also buy children to serve as slaves of R'hllor and raise them as priests, temple prostitutes, or warriors known as the Fiery Hand. In cities where slaves are branded with facial tattoos, slave red priests have flames tattooed across their faces.[citation needed]