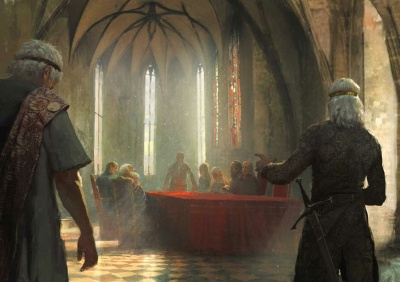 Aegon III's dismissal of both the regents and the Hand, as depicted by José Daniel Cabrera Peña in The World of Ice & Fire

The regency of Aegon III lasted from 131 AC to 136 AC while King Aegon III Targaryen was in his minority. It was a period of numerous political conflicts that occurred among the council of regents and several Hands of the King.

Aegon ascended the Iron Throne at the age of ten, after losing most of his family to the unprecedented internal conflict and civil war that came to be known as the Dance of the Dragons.[1] Several regents and Hands ruled in Aegon's name for the first five years of his reign until the king came of age. During the regency numerous political schemes, plots and assassinations happened as the regents and their supporters vied for political power.[2]

Beginning of the Regency

After witnessing the horrific death of his mother, Rhaenyra Targaryen, late in the war, Aegon had become a quite sullen, melancholic boy who spent days alone brooding. He was used as a pawn as the lords and regents of the small council all sought to gain a political stronghold.[2]

The regency of King Aegon started with seven individual regents, who became known as a council of seven. Of these seven regents, only Grand Maester Munkun served during the entire regency. Other regents and Hands of the King resigned, were replaced, or died. Aegon's reign began in the second year of a harsh winter, which would last until 135 AC. Winter Fever took several of Aegon's regents.[2]

In 133 AC, Winter Fever took Ser Tyland Lannister, who had returned from the Free Cities the year before, and had been named Hand of the King, a position which he held and fulfilled capably, despite his mutilations. Lord Roland Westerling, one of the regents, died in 133 AC of Winter Fever as well, and was subsequently replaced by Lord Thaddeus Rowan.[2]

Lord Unwin Peake had felt slighted when he had not been amongst the original seven regents. Yet in 132 AC, he was given Lord Corlys Velaryon's position. He rose to the position of Hand in 133 AC, following the death of Ser Tyland Lannister. In his position of power, he saw his kin hold many high office, and endeavored to weaken his rivals by any means at hand.[2]

King Aegon III had married his cousin, Princess Jaehaera Targaryen, the sole surviving child of King Aegon II Targaryen, following the end of the civil war. She apparently killed herself in 133 AC, when she threw herself out of her window and was impaled on the spikes of Maegor's Holdfast. Whilst officially named a suicide, there are some who question the manner of her death. Some whisper that Jaehaera had been murdered, and one of the suspects named was Ser Mervyn Flowers of the Kingsguard, the bastard half-brother of Lord Unwin, who had been the guard at Jaehaera's door when she died. Court-fool Mushroom suggests that Mervyn did not do the deed himself, but had allowed for someone else to push her out of the window. Maester Yandel speculates the assassin was Tessario the Tiger, a sellsword of the Free Cities in Lord Unwin's service.[2]

Following the death of Queen Jaehaera, Lord Unwin attempted to marry his own daughter to King Aegon. When the regents stopped his attempts, the Hand arranged the Maiden's Day Ball, during which a thousand maids were presented to the king. Ladies Rhaena and Baela Targaryen presented a cousin of theirs, Lady Daenaera Velaryon, at the time only six years old. Aegon choose her as his new queen, which greatly frustrated Lord Peake. He attempted to have the king's choice put aside, but the other regents, as well as Aegon, opposed him. Unwin threatened to resign as Hand of the King in an attempt to bend the other regents to his will, but they were only happy to oblige. Thus Lord Peake's resignation was accepted and he was replaced as Hand by Lord Thaddeus Rowan in 134 AC.[2]

Lord Dalton Greyjoy, the Red Kraken, had joined the Dance of the Dragons on the side of Queen Rhaenyra Targaryen, and had been allowed to raid the western coasts.[3] Though the war ended, House Greyjoy's raids from the Iron Islands did not.

Lord Alyn Velaryon, denied Lord Corlys Velaryon's place on the council, sailed with Ser Gedmund Peake against Racallio Ryndoon in the Stepstones. While Gedmund waited at Tarth for orders from Unwin, the Velaryons continued south and achieved a great victory against Racallio's Braavosi allies.[4] When Alyn returned to King's Landing, his newborn fame proved divisive. The regents, despite Unwin's protests, gave Alyn honors and rewards. Lord Peake in the end convinced the regents to dispatch Alyn to the westerlands to deal with Dalton, almost certainly hoping it would result in Alyn's death or defeat. Instead, it became the first of six great voyages by Alyn.[2]

Dalton was eventually killed on Fair Isle, when a girl named Tess opened his throat with a dagger. As Dalton had never married, a bloody struggle began within hours of his death. Lady Johanna Lannister extracted revenge for all the suffering of the westerlands in 134 AC, when a Lannister force, with the aid of Ser Leo Costayne, attacked the Iron Islands.[5]

Succession conflict in the Vale

Upon the death of Lady Jeyne Arryn in 134 AC from an illness, a succession war broke out in the Vale of Arryn between three of her rival heirs: her fourth cousin and designated heir Joffrey Arryn, her spurned first cousin Arnold Arryn, and her distant but wealthy cousin Isembard Arryn. The Iron Throne tried to intervene but was hampered by poor planning and political infighting between the regents, resulting in heavy losses. Gulltown was taken only after costly house-to-house fighting. The fighting continued for over a year and only ended at the beginning of 136 AC, about half a year before the end of Aegon III's regency.

Return of Prince Viserys and the Lysene Spring

Aegon III's younger brother, Prince Viserys Targaryen, was believed dead by many. His return to King's Landing was one of the few joys of Aegon's reign. Having been found in Lys by Lord Alyn Velaryon, a huge ransom was paid and the prince was allowed to return to King's Landing. With him, he brought his new wife, Larra Rogare, a wealthy daughter of the powerful and ambitious Rogare family. Larra's family owned the Rogare Bank, so powerful at the time that it was greater than the Iron Bank of Braavos.[2]

The Rogare family soon became involved in the conflicts of this period. Accusations of wrongdoing were spread back and forth by many parties. Lord Thaddeus Rowan was accused of treason and being involved in a plot with the Rogare family and was tortured for information. After these affairs, Ser Marston Waters of the Kingsguard became Hand of the King, and sent men to arrest Lady Larra after he arrested her brothers, Lysaro and Moredo. The young king Aegon defended his brother and his brother's wife and family, however, and refused to give her up, which led to a secret siege in Maegor's Holdfast for eighteen days. Eventually, recalling his duty, Marston attempted to fulfil his king's command and arrest those who falsely implicated the Rogares and Lord Rowan. Ser Marston himself was killed attempting to arrest his sworn brother, Ser Mervyn Flowers.[2]

Grand Maester Munkun briefly took over as Hand of the King and restored order until new regents were appointed. Lord Torrhen Manderly was made the new Hand, and Willam Stackspear, Marq Merryweather, and Lorent Grandison were chosen by a Great Council to serve on the council in 136 AC.[2]

The regency ended on the day of King Aegon III Targaryen's sixteenth name day. The king entered the small council chambers, accompanied by four knights of the Kingsguard and the silent Sandoq the Shadow, and coldly dismissed all of the regents and his Hand.[2][6]

The council of Aegon III's regents, as originally constituted, consisted of:[2]

Regents chosen by lot at the Great Council of 136:

Hands of the King:

Six strong men and one wise woman, seven to rule us here on earth as the Seven Above rule all men from their heaven.[7]

Seven regents were six too many. Pity our poor king.[7]

Aegon: Lord Manderly, pray tell me how old I am, if you would be so good.


Torrhen: You are ten-and-six today, Your Grace. A man grown. It is time for you to take the governance of the Seven Kingdoms into your own hands.


Aegon: I shall. You are sitting in my chair.[6]
—Aegon III Targaryen and Torrhen Manderly as the regency is ended

And thus the rule of the regents came to a whimpering end, as the broken reign of the broken king began.[6]