Ser Richard Horpe is a knight of House Horpe in service to Stannis Baratheon.[3]

Ser Richard is lean, dark-haired and hard-eyed. His face is marred by pockmarks and old scars.[1][2] He enjoys battle and killing.[1]

Richard's quilted doublet and faded surcoat display the three death's-head moths of House Horpe.[1][2] He armors himself in plate and mail.[4]

As a squire Richard wanted to join the Kingsguard, but King Robert I Baratheon chose another knight after Queen Cersei Lannister objected to Richard.[1]

When the Battle of the Blackwater turns against Stannis Baratheon, Richard and Ser Justin Massey convince Stannis to retreat back to Dragonstone.[2]

During the battle beneath the Wall, the wildling Dormund is killed by a knight with moths on his shield,[5] possibly Richard.

One of the queen's men, Richard is part of Stannis's court at Castle Black.[3] 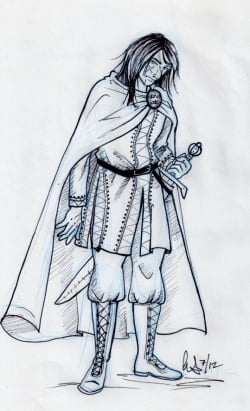 The ambitious Richard desires to claim Winterfell, although Stannis has no intention of granting the castle to his knight.[1] Stannis sends Richard and Justin south on the kingsroad;[6] Jon Snow, the Lord Commander of the Night's Watch, thinks of them as "wrong-way rangers".[1]

During Stannis's war council, Richard advocates for attacking the Dreadfort.[1] Jon dissuades Stannis, however, and the king instead marches to court the northern mountain clans.[7]

Stannis is victorious in the fight by Deepwood Motte,[7] and Richard serves as his second-in-command during the march on Winterfell.[8] The army stops at a crofters' village in the wolfswood, so Richard tasks his men with fishing in two nearby lakes.[8] With Stannis's men slowed by a blizzard, Richard insists they must press on to attack Winterfell. He questions Justin's courage and dedication to R'hllor.[4]

Richard is present along with Ser Godry Farring and Clayton Suggs when Stannis interrogates Maester Tybald about his loyalties. He is then put in charge of disarming Arnolf Karstark's men while Stannis breaks his fast with Arnolf, his son Arthor, and grandsons. Richard and other queen's men want Stannis to sacrifice Theon Greyjoy to the Lord of Light, although Stannis is skeptical of Richard's sincerity.[2]

Risk is part of war. Every battle is a gamble, Snow. The man who does nothing also takes a risk.[1]

Richard: Only the Lord of Light can save us now. Wouldn't you agree?


Justin: My faith runs as deep as your own, Richard, you know that.


Richard: It is your courage I question, Justin, not your faith. You have preached defeat every step of the way since we rode forth from Deepwood Motte. It makes me wonder whose side you are on.[4]
—Richard and Justin Massey

Horpe will take Val to wife if I command it, but it is battle he lusts for. As a squire he dreamed of a white cloak, but Cersei Lannister spoke against him and Robert passed him over. Perhaps rightly. Ser Richard is too fond of killing.[1]

Dormund was cut down in the battle for the Wall, and him still half a boy. One o' your king's knights did for him, some bastard all in grey steel with moths upon his shield. I saw the cut, but my boy was dead before I reached him.[9]