Ser Rodrik Cassel is a knight from House Cassel and a member of the Stark household. He is the uncle of Jory Cassel and is the master-at-arms of Winterfell.[3] In the television adaptation Game of Thrones he is portrayed by Ron Donachie and in a Season 6 flashback by Fergus Leathem.

Rodrik is a stout[4] man with soft flesh under his chin.[5] He has white hair[5] and large white whiskers which he impulsively tugs at.[4][6]

The loyal Rodrik is courteous and courageous.[7][8] He does not like singers, believing that swordsmanship is more suitable than music for boys, and is not interested in tourneys.[6] Rodrik speaks of the gods,[9] but it is unknown if he follows the old gods or the new.

The knight wears ringmail, dagger, and longsword under a hooded dark cloak.[10] He rides a dappled gelding[11] and owns a red dog.[12]

Rodrik's mother died forty years ago.[10] According to Maester Luwin, Rodrik has served House Stark all his life.[11]

Eddard Stark, Lord of Winterfell, sometimes invites Rodrik to join him for meals.[17]

When Ser Waymar Royce joined the Night's Watch, Lord Yohn Royce accompanied his son to the north. During a sparring session at Winterfell, Bronze Yohn defeated first Eddard and then Rodrik.[18]

Ser Rodrik's dog whelps a small litter with two living puppies. Robb Stark thinks she could nurse the direwolf pups found by the Stark children, but Lord Eddard Stark thinks they would tear her apart.[19]

As master-at-arms, Rodrik observes when Bran Stark spars with Prince Tommen Baratheon at Winterfell, and he refuses to allow Robb and Prince Joffrey Baratheon to spar with steel.[4] Rodrik is part of Robert I Baratheon's party when the king hunts for boar near the castle.[20]

After the discovery of the Valyrian steel dagger from the attempted assassination of Bran, Rodrik swears an oath to the boy's mother, Lady Catelyn Stark. Rodrik volunteers to accompany Catelyn to King's Landing so she can discretely inform her husband, Lord Eddard.[13] Rodrik suggests hiring a fishing sloop from the Three Sisters after the pair ride to White Harbor, but Catelyn insists upon traveling on a galley. The voyage on Storm Dancer is a difficult one for Rodrik, who becomes seasick and has to cut his whiskers because they become soiled from vomit. Moreo Tumitis's men have to save Rodrik from being knocked overboard during a storm near Dragonstone.[10]

In King's Landing, Rodrik brings the dagger to Ser Aron Santagar, the master-at-arms of the Red Keep, in his armory in a vain hope that he might recognize the blade. Rodrik and Aron then drink in the common room of the inn on Eel Alley in which Rodrik and Catelyn are staying. Meanwhile, Catelyn meets Lord Petyr Baelish in the Red Keep, and her childhood friend tells her that the dagger that was used in the attempt on Bran was owned by Tyrion Lannister.[10] Later, after Catelyn tells Eddard about the attempt on Bran, Lord Stark decides that Catelyn should return to Winterfell.[5]

Rodrik and Catelyn disguise themselves as father and daughter on their way back to Winterfell. At the crossroads inn in the riverlands, however, they meet Tyrion Lannister, who recognizes Catelyn. Because of what Petyr has told her, Catelyn holds Tyrion responsible for the attack on her son, and Rodrik helps take the Imp prisoner.[6]

Catelyn takes Tyrion to the Vale of Arryn where her sister, Lady Lysa Arryn resides, in order to confuse her enemies. During the ride through the Mountains of the Moon, they are twice set upon by the Vale mountain clans. In the first skirmish Rodrik bests the group's champion, but is seriously wounded, suffering a deep gash in his left arm and a spear graze to his neck. He makes it to the Bloody Gate only by being tied to his saddle. There he and Ser Willis Wode are left to recover from their wounds with the aid of a septon.[21] The two knights eventually continue on to the Eyrie,[22] and Rodrik regrows his side whiskers.[23]

Ser Brynden Tully joins Rodrik and Catelyn when they depart the Eyrie and return to the north via a ship from Gulltown.[23] When they arrive in White Harbor, Catelyn decides to join her eldest son, Robb Stark, at Moat Cailin, and she has Rodrik return to Winterfell as the castle's castellan.[24]

Rodrik trains boys recruited to be new House Stark guardsmen.[25] Since Osha has been a loyal servant to the crippled Bran, Rodrik orders that her chain be removed.[25] 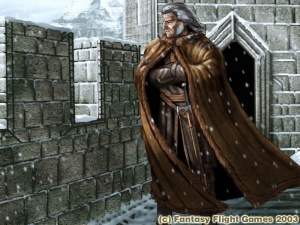 Rodrik Cassel at Winterfell, by Amok ©

With Robb, now the King in the North, and Lady Catelyn in the south, Rodrik holds the command of Winterfell together with Maester Luwin. Rodrik trains Catelyn's new wards, Big Walder and Little Walder Frey, and has them sleep in Jon Snow's old chambers. After Shaggydog bits Little Walder, Rodrik has Shaggydog and Summer confined to the godswood of Winterfell.[26]

Rodrik, Bran, and Luwin meet with various northern bannermen after they arrive for the harvest feast, including Lord Wyman Manderly, Lady Donella Hornwood, Mors and Hother Umber, and Leobald Tallhart.[27] The recently-widowed Donella hints that she would not be averse to choosing Rodrik if Robb were to ask her to remarry. Rodrik, however, explains to Bran that he is too old to provide security for Donella.[27] Rodrik orders the Umbers to cooperate with Wyman in building ships.[27] Rodrik asks Donella to dance during the feast, but she respectfully declines.[7]

Ramsay Snow, the Bastard of Bolton, seizes Lady Hornwood after she departs the harvest feast, so Rodrik heads east to resolve the situation.[28] Rodrik's men kill Ramsay and capture his servant, Reek, but they are too late to save Donella, who has starved to death after being locked in a tower by Ramsay.[29]

During the harrying of the Stony Shore, Theon Greyjoy plots to draw Rodrik and his garrison from Winterfell by having Dagmer Cleftjaw threaten Torrhen's Square.[30] Bran and Rickon Stark are seized by Theon and his ironborn during his capture of Winterfell.[31] After the Stark boys disappear, Theon and Reek kill two miller's boys and present their corpses as those of Bran and Rickon.[32][11]

After Rodrik defeats Dagmer's shield wall in the fight at Torrhen's Square,[33] he sends a raven from Castle Cerwyn to Riverrun to inform Catelyn of the supposed deaths of Bran and Rickon.[34] Rodrik gathers more forces to besiege Winterfell.[34][33]

Rodrik, Leobald, and Lord Cley Cerwyn parley with Theon before the gates of Winterfell, demanding his life and the castle, but Theon threatens to hang Rodrik's daughter, Beth Cassel, if Rodrik attacks. Luwin advises Theon to surrender, stating that Rodrik would allow Theon to then take the black.[11] A force of Bolton men approach the besiegers, apparently to join them in the siege, but the newcomers then attack Rodrik's host. After the battle at Winterfell, the Boltons' leader reveals to Theon that he is not Reek but actually the still-living Ramsay Snow. The Bastard of Bolton explains he killed Rodrik by chopping his left arm when the knight offered it in friendship. Ramsay then orders his men to kill Theon's ironmen and burn Winterfell.[11]

At Riverrun, Lothar Frey tells Robb and Catelyn that Rodrik was slain when northmen tried to retake Winterfell from the ironmen. Walder states that his Frey kin, and the women and children of Winterfell were taken by Ramsay to the safety of the Dreadfort.[8] At the Twins, Lord Roose Bolton says that Ramsay took command of the northmen after ironmen cut down Rodrik.[35]

Rodrik's daughter Beth is held captive at the Dreadfort.[36]

Robett Glover and Lord Manderly learn from Wex Pyke that Ramsay's claim of Theon having killed Rodrik during a parley is false. Wyman tells Ser Davos Seaworth that it was instead Ramsay who slew the knight.[37] 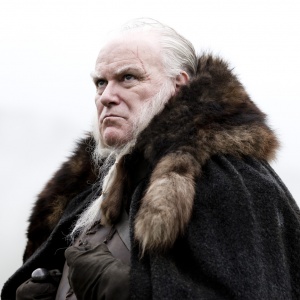 Ron Donachie as Rodrik in Game of Thrones

Sandor: Are you training women here?
Rodrik: I am training knights. They will have steel when they are ready. When they are of an age.[4]

Never draw your sword unless you mean to use it. How many times must I tell you, foolish boy?[13]

The gods frown on the gambler.[6]

Rodrik: We shall try and find you a prospect more to your taste.
Donella: Perhaps you need not look very far, ser.[27]

When we speak of the morrow nothing is ever certain.[27]

Theon: It grieves me that we must meet as foes.
Rodrik: My own grief is that I must wait a while to hang you. Theon Turncloak.[11]

Know your foe, Ser Rodrik had taught him once; Jon knew Halder, brutally strong but short of patience, with no taste for defense.[38]

The castellan at Winterfell is a brave man, but age has stiffened his wits as well as his limbs. When he learns that one of his king's bannermen is under attack by the fearsome Dagmer Cleftjaw, he will summon his strength and ride to Tallhart's aid. It is his duty. Ser Rodrik is nothing if not dutiful.[30]

That dear brave loyal old soul. She could almost see him, tugging on his fierce white whiskers.[8]

There is always someone quicker and stronger, Ser Rodrik had once told Jon and Robb. He's the man you want to face in the yard before you need to face his like upon a battlefield.[15]

Ser Rodrik married three times. His wives gave him daughters but Beth is the only one who survived.[27]