From A Wiki of Ice and Fire
(Redirected from Ruby Ford)
Jump to: navigation, search

crossroads inn
The riverlands and the location of the inn at the crossroads;[1] the ruby ford is nearby.[2]

The ruby ford[3][4] or Ruby Ford[5] is a crossing of the Trident in the eastern riverlands.[2] It is so named for the rubies that were knocked from Prince Rhaegar Targaryen's breastplate during the Battle of the Trident.[6] The inn at the crossroads lies near the ford.[7][8] There is no crossing of the Green Fork north of it until the Twins.[9]

The ruby ford has not yet been depicted on maps of A Song of Ice and Fire. According to George R.R. Martin, the ford is downriver from Lord Harroway's Town.[10] When sailing down the Red Fork to Maidenpool, one passes the ruby ford.[11] Darry is located about half a day's ride to the south.[12]

The semi-canon A World of Ice and Fire states the ford is near the junction of the kingsroad and the river road,[2] and its "Westeros" map has a pin for the Ruby Ford in the vicinity of Harroway and Darry.[13]

The non-canon map for the television adaptation Game of Thrones places the ruby ford north of the confluence of the forks of the Trident and northwest of the crossroads inn.[14] 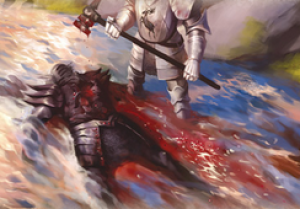 During Robert's Rebellion against the ruling Targaryen dynasty, Lord Robert Baratheon's rebel host was met at a ford crossing the Trident by a loyalist army commanded by Prince Rhaegar Targaryen, resulting in the Battle of the Trident. When they came together at the ford they fought a personal battle, which Rhaegar lost when Robert drove his warhammer into the prince's chest, killing him. Adorning Rhaegar's breastplate was a three-headed dragon, the symbol of House Targaryen, done in rubies. The hammer blow knocked the rubies from Rhaegar's chest, spilling them into the water and giving the ford its name.[6]

Arya Stark and Mycah leave the inn at the crossroads[8] to look for rubies remaining in the ford from the Battle of the Trident. Nearby, Prince Joffrey Baratheon is attacked by Arya's direwolf, Nymeria.[7]

After Lord Tywin Lannister leaves the crossroads inn during the War of the Five Kings, Lord Roose Bolton reclaims the ruby ford from the Lannisters along with the crossroads.[15]

Having escaped Riverrun, Ser Jaime Lannister and Brienne of Tarth divert from the Trident because they do not know who holds the ruby ford.[11]

The hosts commanded by Ser Aenys Frey and Roose Bolton have difficulty crossing the ruby ford because the Trident is in flood.[16] Ser Gregor Clegane defeats the rearguard of Roose in the fighting at the fords of the Trident[4][17] and seizes the ruby ford.[18]

After fighting some of the Mountain's men at the crossroads inn, Arya Stark and Sandor Clegane head for Saltpans through brush to avoid the kingsroad and the ruby ford.[8]

The Elder Brother tells Brienne that six rubies from Rhaegar Targaryen's breastplate have washed up in the vicinity of Saltpans and the Quiet Isle. As they are followers of the Faith of the Seven, the brothers of the septry await the finding of a seventh ruby.[19]

When Ned had finally come on the scene, Rhaegar lay dead in the stream, while men of both armies scrabbled in the swirling waters for rubies knocked free of his armor.[6]

Arya: Mycah and I are going to ride upstream and look for rubies at the ford.


Arya: Rhaegar's rubies. This is where King Robert killed him and won the crown.[7]
—Arya Stark and Sansa Stark