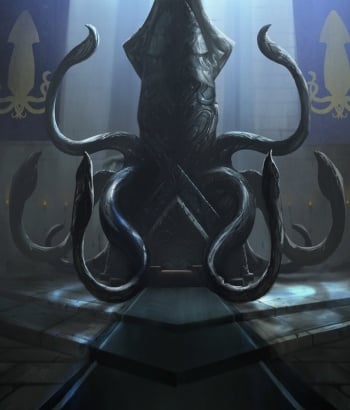 The Seastone Chair is made of a block of oily black stone carved into the shape of a kraken. Legend says it was found on the shores of Old Wyk by First Men when they came to the Iron Islands.[2] Archmaester Haereg pondered that the chair was created by a people who inhabited the isles before the First Men,[3] and Maester Kirth speculated in Songs the Drowned Men Sing that the chair was left by a people from across the Sunset Sea.[4] Noting similarities between the Seastone Chair and the base of the Hightower, Maester Theron suggested in Strange Stone that they were the work of so-called Deep Ones.[5]

House Greyjoy of Pyke has ruled the Iron Islands since Aegon's Conquest.[6] It is unknown if extinct iron king dynasties, such as the Greyirons or Hoares, used the Seastone Chair as their throne.

After Lord Dalton Greyjoy was killed at Faircastle without an heir by a rock wife, the Seastone Chair passed by law to his oldest salt son, Toron Greyjoy.[7]

The Seastone Chair is now located on a dais in the Great Hall of the Great Keep of Pyke, the seat of Lord Balon Greyjoy. His younger brother Aeron Damphair, a priest of the Drowned God, claims that only a pious ironman can sit the throne, not an ungodly man or a woman.[8] 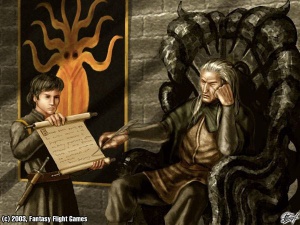 Lord Balon Greyjoy declares himself King of the Isles and the North during the War of the Five Kings.[9]

The day after Balon falls to his death while crossing Pyke, his notorious brother Euron returns to the Iron Islands and claims the Seastone Chair.[10]

Aeron Greyjoy insists upon a kingsmoot to determine the new king,[8] but the gathering on Old Wyk confirms Euron as king.[11]

Euron explains that Victarion Greyjoy will receive the Seastone Chair once Euron claims the Iron Throne.[12]

The ironborn would never seat a stranger in the Seastone Chair.[2]

For I have heard the god, who says, No godless man may sit my Seastone Chair![8]

—Aeron Greyjoy to his drowned men

An iron king shall rise again, to sit upon the Seastone Chair and rule the isles.[11]