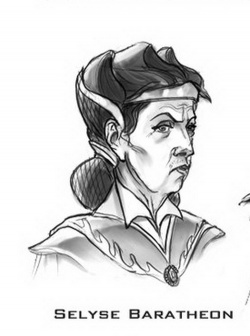 Selyse Florent, also known as Selyse Baratheon,[1] is the wife of Lord Stannis Baratheon and is the Lady of Dragonstone.[3][4] Selyse is a fervent worshiper of R'hllor and a supporter of Melisandre. In the television adaptation Game of Thrones she is portrayed by Sarah MacKeever and Tara Fitzgerald.

Selyse is not a particularly attractive woman. She is as tall as her husband, thin, and has the Florent trait of too-large ears. Selyse has pale eyes, a sharp nose, and suffers from hair growth on her upper lip. Her mouth is stern and her voice a whip.[5][6]

Selyse is married to Lord Stannis of House Baratheon of Dragonstone. It is a loveless marriage, and the two have little patience for each other. They have one daughter, Shireen, a sad little girl bearing a disfigurement from greyscale.

Selyse married Stannis in either 286 AC or 287 AC.[8] During their wedding Stannis's elder brother, King Robert I Baratheon, deflowered Delena Florent, a cousin of Selyse, in the bed made for the newlyweds.[9] Delena became pregnant and gave birth to a boy, Edric Storm. Selyse later said to her husband that because of this they were cursed and they had no sons.[6]

Stannis is not fond of his wife.[10] They seldom sleep together and despite their hopes they have no sons, only a daughter, Shireen.

Some years before the start of A Song of Ice and Fire, Lord Varys informed Robert's small council that Selyse had taken up with a red priest.[10]

When Melisandre attached herself to Stannis, Selyse became her most fervent supporter and immediately took to worshiping R'hllor, the Lord of Light. Selyse's uncle, Ser Axell Florent, soon converts as well.[11] Selyse becomes Stannis's queen after he claims the Iron Throne. Within the ranks of those who follow Stannis, those who believe in R'hllor are named queen's men after Selyse.[9] Selyse's crown matches that of Stannis, red gold with points in the shape of flames.[11]

In order to discredit Stannis, the small council of King Joffrey I Baratheon spreads rumors that the father of Selyse's daughter, Shireen, is not Stannis, but instead the fool Patchface.[10]

When Stannis sails for Storm's End, he leaves Selyse and her uncle, Ser Axell Florent, on Dragonstone.[12] Selyse's influence on her husband becomes greater after Renly Baratheon is killed at Storm's End and Selyse's family from House Florent go over to Stannis. Selyse's brother, Ser Imry Florent, leads his fleet. Their hopes are shattered when the fleet is destroyed during the Battle of the Blackwater.[13]

After the Battle of the Blackwater and the subsequent flight by Stannis's forces to Dragonstone, Stannis remains enclosed in the Stone Drum, unwilling to speak with anyone. Selyse, with the help of her uncle, Lord Alester Florent, now the Hand of the King, holds court during Stannis's self-imposed silence.[14] Alester is later imprisoned for treason, however.[15]

Selyse tries to help Melisandre persuade Stannis to sacrifice Robert I Baratheon's bastard, Edric Storm. The sacrifice of Edric would supposedly wake the stone dragon statue on Dragonstone. Davos Seaworth, Stannis's new Hand, prevents this and has the boy shipped off to the Free Cities.[16]

Davos advises that the real enemy is in the north, based on a letter from Maester Aemon of the Night's Watch. Stannis agrees and travels with Selyse and most of his remaining army to the Wall. Selyse and Shireen remain at Eastwatch-by-the-Sea while Stannis travels west to save Castle Black from the invading wildlings.[17]

Selyse remains at Eastwatch while Stannis is at Castle Black.[18] 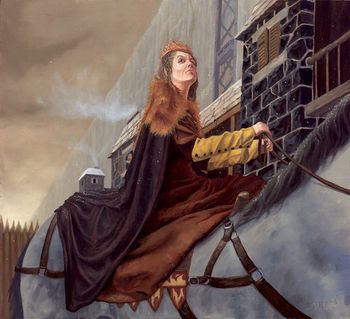 Selyse is unhappy with her accommodations at Eastwatch-by-the-Sea and her treatment by its commander, Cotter Pyke. She demands that she be allowed to move into the Nightfort that was to be given to Stannis when repaired. When it is found that the Nightfort is habitable she leaves Eastwatch for Castle Black with her daughter, Shireen; the fool, Patchface; her serving girls and lady companions; and a retinue of knights, sworn swords, and men-at-arms fifty strong. She is given the royal chamber in the King's Tower of Castle Black.[11] Jon Snow, the Lord Commander of the Night's Watch, thinks the flame-like crown she wears is the only warmth Selyse has.

Selyse arranges the wedding of Gerrick Kingsblood's three daughters to her Hand of the Queen, Ser Axell Florent, and her knights, Ser Brus Buckler and Ser Malegorn of Redpool. She claims that Gerrick is the true King of the Wildlings, descended in an unbroken male line from Raymun Redbeard, a great King-Beyond-the-Wall. However, Tormund states Gerrick is descended from Raymun Redbeard's younger brother, not the king, and the kingship among the free folk is not hereditary. Selyse also wants Val to marry Ser Patrek of King's Mountain, but is rebuffed.[19]

Selyse: No man may withstand him!
Stannis: Be quiet, woman. You are not at a nightfire now.[20]

Selyse: Robert and Delena defiled our bed and laid a curse upon our union. This boy is the foul fruit of their fornications. Lift his shadow from my womb and I will bear you many trueborn sons, I know it. He is only one boy, born of your brother's lust and my cousin's shame.
Stannis: He is mine own blood. Stop clutching me, woman.[21]

A queen should be mistress beneath her own roof.[11]

—Selyse to Jon Snow, regarding the wildlings stuck at Hardhome

The red woman had won her, heart and soul, turning her from the gods of the Seven Kingdoms, both old and new, to worship the one they called the Lord of Light.[5]

You'd have to be a fool to want to bed Selyse Florent.[22]

There must have been a blizzard the day she and Stannis wed. Huddled beneath her ermine mantle and surrounded by her ladies, serving girls, and knights, the southron queen seemed a frail, pale, shrunken thing. A strained smile was frozen into place on her thin lips, but her eyes brimmed with reverence. She hates the cold but loves the flames. He had only to look at her to see that. A word from Melisandre, and she would walk into the fire willingly, embrace it like a lover.[23]

You lied about her beard. That one has more hair on her chin than I have between my legs.[1]

This queen never fails to disappoint.[19]

Afraid of being carried off, is she? I hope you never said how big me member is, Jon Snow, that'd frighten any woman. I always wanted me one with a mustache.[19]