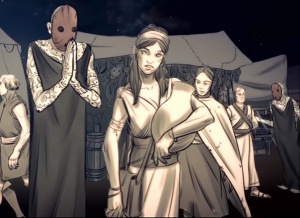 Shadow Men in the Eastern Market of Vaes Dothrak

The Shadow Men[1] or Shadowmen[2] are the people settled along the mountainous region of Essos known as the Shadow Lands, in the Further East of the known world. Shadow Men are known for covering their bodies in tattoos and wearing red lacquered wooden masks.[1]

Some Shadow Men have engaged in piracy and reaving. The maroon emperors of Yi Ti kept their court in Jinqi to better guard the borders of the Golden Empire from reavers from the Shadow Lands.[3]

During her stay at Vaes Dothrak to be presented to the dosh khaleen, Daenerys Targaryen often spends her mornings in the Eastern Market. She enjoys watching the people there, including dour and frightening masked Shadow Men.[1]

Quaithe of the Shadow helps bring Daenerys from the red waste to Qarth.[4]