Shagwell, better known as Shagwell the Fool, is a psychotic jester and member of the Brave Companions mercenary company.

Shagwell wears green and pink motley.[1] He tells cruel jokes, and fights with a three-headed flail.[2] He is said to be half-mad.[3]

Jaime Lannister considers Shagwell one of the three worst members of the Brave Companions.[4]

There are rumours said that Shagwell once killed a man for not laughing at one of his japes.[3] 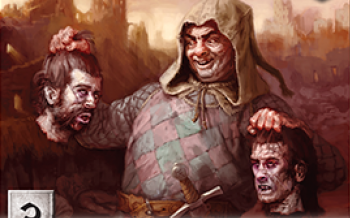 Shagwell is one of the many members of the Brave Companions mercenary company that arrives at Harrenhal under the employ of Tywin Lannister. He participates in the slaughter of Ser Amory Lorch's men, in which he hacks off the heads of two dead knights and swings them by their hair to talk to each other as part of a puppet show.[3]

Shagwell spreads the story of the 'weasel soup' and Arya Stark's involvement in Harrenhal's takeover, which prompts Arya to consider adding him to her prayer kill list, but her fear of Shagwell negates this thought.[3] After the sack of Harrenhal, he hacks the heads of two dead knights of the garrison and prances through the castle, swinging the heads by the hair and mockingly making them talk of the cause of their deaths. When Lord Roose Bolton arrives at Harrenhal, Shagwell introduces Arya to him as the 'weasel who made the soup', and later kicks the captive Amory Lorch into the bear pit.[3]

Shagwell is part of the foraging company who captures Ser Jaime Lannister and Brienne of Tarth near Maidenpool, kicking Jaime to the ground so that Zollo can maim him.[2]

On the way back to Harrenhal, Shagwell, Zollo, and Rorge attempt to rape Brienne, but Jaime thwarts them.[4]

After the scattering of the Brave Companions following Vargo Hoat's death, Shagwell, Timeon, and Pyg splinter off and go to Maidenpool to find passage out of the area, but cannot get near a ship. Dick Crabb cons Shagwell into buying a map to the Whispers, which he says is a popular smugglers' cove. The Whispers is deserted, and the group camps in the ruins until Brienne, Dick, and Podrick Payne arrive. Shagwell jumps down from above Dick and kills him with two blows of his flail. Then he and Timeon begin talking to Brienne in an attempt to distract her while they surround her. As Brienne kills Timeon and Pyg, Podrick throws stones at Shagwell until he yields. Brienne makes him dig a grave for Dick. After he completes digging, he lunges at Brienne with a rock, but she stabs him to death with a dagger.[5]

—Shagwell mocks two dead knights after the sack of Harrenhal

You mustn't hurt sweet Shagwell, I'm too droll to die.[5]

—Shagwell, to Brienne of Tarth