Sigorn is the son of Styr, the Magnar of Thenn.[1]

Sigorn is said to look like his father Styr, albeit younger and shorter: lean, with grey eyes and a receding hairline that makes him look older than his years. He wears bronze greaves and a leather shirt sewn with bronze scales.[2] Sigorn wields a bronze sword.[3]

Sigorn and his people take pride in the fact that they are Thenns, who have lords and laws, unlike the other free folk.[3] Sigorn haltingly speaks the Common Tongue with a thick accent.[4]

After the death of his father, Styr, during the attack on Castle Black, Sigorn inherits the title Magnar of Thenn.[1] 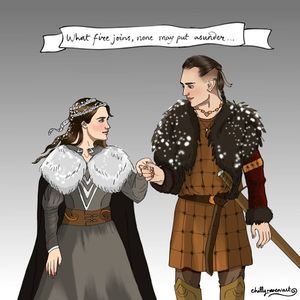 Sigorn kneels before Stannis Baratheon after passing through the Wall.[2] It is rumored at Castle Black that Stannis intends to give lands and castles to Sigorn and Rattleshirt.[2] Sigorn is reluctant to join the Night's Watch after the death of his father.[4] Iron Emmett advises Jon Snow, Lord Commander of the Night's Watch, to grant a castle to the new Magnar of Thenn.[5]

Jon eventually devises a plan to wed Sigorn to Alys Karstark, the current heir of Harrion Karstark, the rightful Lord of Karhold.[3] Alys has fled before a forced marriage arranged by her great-uncle, Arnolf Karstark, to his son, Cregan, in order to claim Karhold.[6] Alys believes that Karhold will yield to her and Sigorn's two hundred Thenns.[3]

During the wedding, which is performed at Castle Black by Melisandre, Sigorn leaps across a flaming ditch with his new bride.[3] Sigorn is initially reluctant to dance during the wedding feast, but he joins Alys after becoming inebriated from mulled wine.[3] Jon notes that despite his fierceness, Sigorn, the founder of House Thenn, is surprisingly tender with his new wife.[3]

Melisandre: Sigorn, will you share your fire with Alys, and warm her when the night is dark and full of terrors?
Sigorn: I swear me. By the red god's flames, I warm her all her days.[3]

Jon: You're not scared?


Alys: Let him be scared of me.

A northern maid and a wildling warrior, bound together by the Lord of Light.[3]