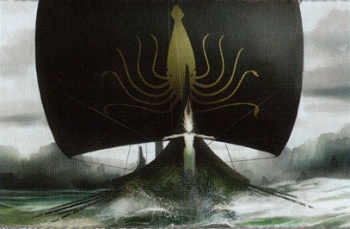 Silence is a galley captained by Euron Greyjoy.[1] It is said to be infamous from Ibben to Asshai.[2]

Silence has a single mast,[1] black sails, and dark red hull.[2] Its decks are painted red to better hide the blood that soaks them. The ship's figurehead is a mouthless maiden with one arm outstretched. The figure is made of black iron, with long shapely legs, a slender waist, and high breasts, and has streaming black iron hair and mother-of-pearl eyes.[1]

The Silence is crewed by mutes[3] and mongrels from throughout the known world.[1]

Theon Greyjoy thinks of his uncle's ship as being lean and terrible,[4] and Victarion Greyjoy considers Silence to be cruel and fast.[1] 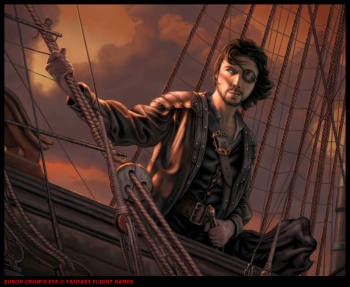 Euron Greyjoy was exiled from the Iron Islands by his older brother Balon, Lord of the Iron Islands, after impregnating Victarion Greyjoy's third wife. Euron sailed east on a lengthy voyage,[1] and he claims to have sailed the Smoking Sea and seen Valyria.[5]

Returning to Pyke aboard Myraham, Theon Greyjoy does not see Silence in port, so his uncle Euron must not be there to greet him.[4]

The captain of the Myraham reports that Euron sailed the Silence into Lordsport soon after the death of Balon Greyjoy, King of the Isles and the North.[3] According to a semi-canon source, the Silence had earlier intercepted a galleas containing four warlocks of Qarth who were seeking Daenerys Targaryen,[6] and Euron claimed their dragon horn.[7]

Lord Rodrik Harlaw tells Euron's niece, Asha, he heard that Silence returned the day after Balon's death. Euron uses treasures from its hold to gain ironborn support for the kingsmoot on Old Wyk.[8]

Victarion Greyjoy spots the Silence at anchor in Nagga's Cradle.[1] Euron claims to have sailed the Smoking Sea.[5] Cragorn, one of the ship's crew, dies after blowing the dragon horn.[5]

Aeron Greyjoy was captured after the kingsmoot by Euron's mutes and chained up in the hold of the Silence. Several weeks later, Euron has Aeron and Falia Flowers bound to the prow of the Silence before the ironborn engage the ships of House Hightower and House Redwyne in battle.[9]

Even at anchor Silence looked both cruel and fast.[1]

On her decks a motley crew of mutes and mongrels spoke no word as the Iron Victory drew nigh. Men black as tar stared out at him, and others squat and hairy as the apes of Sothoros. Monsters, Victarion thought.[1]

From Ib to Asshai, when men see my sails, they pray.[1]

Victarion's gaze was drawn to the iron figurehead at her prow, the mouthless maiden with the windblown hair and outstetched arm. Her mother-of-pearl eyes seemed to follow him. She had a mouth like any other woman, till the Crow's Eye sewed it shut.[5]