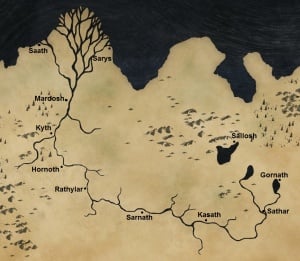 Sarnor and the remains of the Silver Sea, from the TV map based on Martin's original sketch, before the river was accidentally erased (city names added).

The Silver Sea was a great inland sea in northern Essos. Because of decreasing rainfall over time, it has been reduced to three large lakes in the grasslands of the northern Dothraki sea.[1]

The Silver Sea of antiquity was ruled by the legendary Fisher Queens, and some theories claim the Andals originated in the fertile land south of the sea. The Kingdom of Sarnor later included the three great lakes of the former Silver Sea. Nearby cities of the Tall Men included Gornath by the Lake and Sallosh by the Silver Shore, but they were sacked by the Dothraki during the Century of Blood.[1]

According to co-writer Elio Garcia, the map given in The Lands of Ice and Fire for Sarnor is in error. In George R. R. Martin's original handwritten notes, the Sarne flows out of the Silver Sea, proceeding west past Sarnath before curving north to its delta near Saath and Sarys. Thus all cities of the Sarnori were built around one river system. Unfortunately, as Garcia gleaned from the handwritten maps, it appears that when Martin wrote "Kingdom of Sarnor" over the core of their territory he partially erased the line of the river between the Silver Sea and Sarnath. Jonathan Roberts, the illustrator for The Lands of Ice and Fire, may have assumed that the Silver Sea empties into the sea through a separate river system proceeding in the shortest path, to the north. This does not match the textual descriptions of the Sarnori cities, such as that Sathar is located at a branch of the Sarne. Garcia hopes that a subsequent edition of the official world map will be updated to correct this.[2]

Martin has said that the world map is not objective but written as it is known to the maesters of the Citadel in Westeros, and it gets increasingly less accurate the farther east it goes.[3] Therefore, in-universe, the first edition world map might be explained as Yandel working from an incorrect map with the original river line accidentally erased.

Moreover, the earlier map of the World Map that Martin provided for the HBO television series Game of Thrones during Season 2 matches his textual description of Sarnor's geography: the Sarne flows west, and the remnants of the Silver Sea are three lakes (not two as in the Lands map, which drain to the north). The earlier map Martin submitted must have predated the erasure.