Small Paul is a steward of the Night's Watch.[3] His nickname is ironic, as he is a very big man.[4]

Small Paul is a large man, although he weighs less then Samwell Tarly.[5] He has a broad brutal face with a flat, squashed pug nose, and small dark eyes.[2][4] He has a coarse, thick brown beard that covers most of his face.[2][4]

Although he is a simpleton, Paul is the strongest man on the Wall, once breaking the back of a wildling with a hug.[2][4] However, he is normally gentle, and does not know his own strength. He dislikes being called stupid.[4] Paul likes animals; he wants to take care of Mormont's raven[4] and attacks an Other for killing a horse.[2] 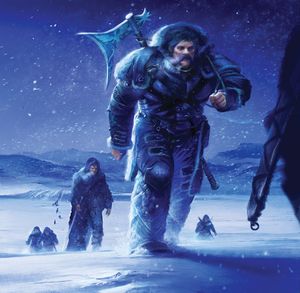 Small Paul is part of the great ranging which leaves Castle Black in search of the wildlings. His part in Chett's conspiracy is to kill Jeor Mormont, Lord Commander of the Night's Watch, with the help of Softfoot. Paul plans to take Mormont's raven for his own.[4]

After the fight at the Fist, the remnant of the Night's Watch retreat in disorder to the Wall. During the retreat Samwell Tarly tires and wants to be left behind, but Paul carries him. Paul asks Sam for a raven as a pet, but all were released at the Fist. A tiring Paul, Sam, and Grenn are eventually overtaken by an Other who rides a dead horse that belonged to a man of the Night's Watch. Grenn and Paul attack the Other, which breaks Grenn's sword and then kills Paul. As he dies Paul crashes into the Other, tearing the sword from its hands. This allows Sam to stab the Other with his obsidian dagger. The Other melts in seconds from contact with the dagger. Grenn checks if Small Paul is really dead and closes his eyes. He and Samwell then travel on to Craster's Keep.[2]

At Craster's Keep, Craster and Jeor Mormont are killed in a mutiny. Samwell flees again with Gilly, a daughter of Craster's, and her infant son. While making their way to the Wall, Paul, who has been turned into a wight, comes after them. According to Gilly, the wight has come for the baby. Sam tries to talk with the wight, partly because he hopes that the undead Small Paul can remember his life, partly so Gilly has time to flee. The wight does not respond, however, and walks to Gilly and her baby. Sam then uses the obsidian dagger, but it has no effect. The wight begins to strangle Sam, but at the last moment he smashes Paul with a chunk of smoldering wood. The flames burn the wight and, after escaping, Sam notices that the blue glow of a wight has left the eyes of Paul's corpse.[5]

Small Paul may be loosely based on Lennie Small, a character from the novella Of Mice and Men written by John Steinbeck.