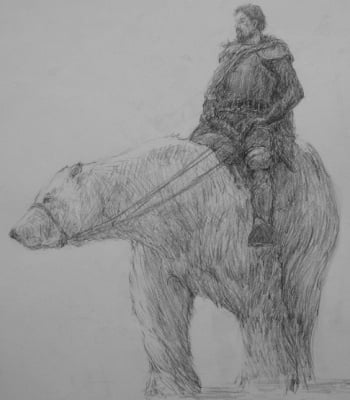 The snow bear is a species of bear similar to real-world polar bears.

Snow bears are white and massive, with one being described as thirteen feet tall.[1] They are native to the region beyond the Wall.[2][3]

The skins of snow bears are very warm. Mance Rayder's tent is made of the shaggy white pelts of snow bears, fit for a king.[4] Some people who wear white bearskin cloaks are Erik Ironmaker,[5] Robert Arryn,[6] and Val.[7] Mors Umber clads himself in the pelt of a gigantic snow bear, with its head as his hood.[8][9]

The greenseers of the children of the forest are said to have called upon snow bears to fight on their behalf.[10]

One of the animals controlled by the skinchanger Varamyr is a female snow bear which he rides into battle.[11][1] The bear hates Varamyr and rages each time he wears her skin or climbs upon her back. The bear used to fight him and had gone half mad for a time after he first skinchanged into her, snapping at trees and rocks and empty air.[1]

Varamyr Sixskins's steed is a savage white female snow bear that stands 13 feet tall on its hind legs. Varamyr rides past Jon Snow on her, and Jon's direwolf Ghost is bothered by the presence of the bear.[11]

During the battle beneath the Wall, Varamyr loses control over his beasts while in agony from the death of Orell's eagle.[12] The snow bear turns her claws on those around her, ripping apart four men before falling to a spear. She would have slain Varamyr had he come within her reach.[1]

After being defeated at the battle beneath the Wall, a ruined Varamyr Sixskins rues to himself that it was Mance Rayder who brought him to this place and that he should not have listened to him. Before Mance he had been a lord of sorts; he thinks that he should have slipped inside his snow bear and torn Mance to pieces.[1]

Outside the cave of the last greenseer, Bran Stark sees a snow bear crash through the brush, huge and skeletal, half its head sloughed away to reveal the skull beneath. Summer and his pack fall upon it and tear it into pieces. Afterwards they gorge, though the meat is rotten, half-frozen, and moves even as they eat it.[13]