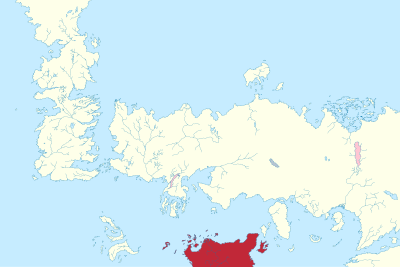 Location of Sothoryos in the known world

Sothoryos[1] or Sothoros[2] is one of the four known continents in the world. It lies to the southeast of Westeros and is south of Essos across the Summer Sea. East of Sothoryos is the southern Jade Sea.

Sothoryos is a large continent, covered in jungles, plague-ridden, and largely unexplored. The northern coast has been mapped, with the ruined cities of Zamettar, Yeen, Gogossos and Gorosh noted, but little else is known of them. Wyvern Point is in northeastern Sothoryos near Lesser Moraq.[3] Explorers of the Summer Isles may have mapped southern Sothoryos. If so, they keep these maps a close guarded secret.[4]

The northern coast has many islands along its length such the Basilisk Isles.[5] Naath also lies off the coast of the continent, to the northwest in the Summer Sea.[6]

Ghiscari believed the continent to be as large as Westeros. Qartheen maps showed the continent as an island twice the size of Great Moraq, but their ships never managed to find the bottom of the continent. The Valyrian Jaenara Belaerys flew her dragon to explore Sothoryos from the air, but after two years turned back, saying that it was at least as large as Essos, possibly "a land without end".[7]

On the northern coast of the continent lie a score of small trade towns of mud, described as wet, humid, and full of misery, where adventurers, rogues, and whores from the Free Cities and the Seven Kingdoms go seeking fortune. Corsairs prey on these settlements, carrying off captives to their holding pens on Talon and the Isle of Tears before selling them to the flesh markets of Slaver's Bay or the pleasure houses of Lys.[7]

Sothoryos men are described as brindle-skinned half-men by Daenerys Targaryen.[8] Their brindled skin is thick, often in patterns of brown and white. They are big-boned and massively muscled, with long arms, sloped foreheads, huge square teeth, heavy jaws and coarse black hair. Their broad, flat noses suggest snouts. Sothoryi women are said to be unable to breed with men from Essos or Westeros, only bringing forth stillbirths or malformed offspring.[7]

The Sothoryi mostly known to the corsairs of the neighboring Basilisk Isles are those who dwell closest to the sea on the northern shore, who have learned the Trade Talk. The Ghiscari consider them to be slow of wit but fierce fighters that make good slaves. Farther south, the Sothoryi are more savage, known for cannibalism and worshiping dark gods with obscene rites. There are also unproven reports of other races and forgotten peoples that were driven out, destroyed, or devoured by the Brindled Men, as well as lizard men and eyeless cave-dwellers.[7] 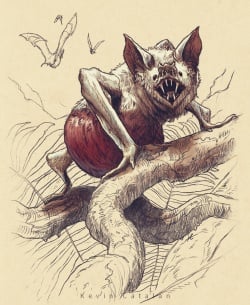 White vampire bats are said to dwell in the Green Hell, by Kevin Catalan ©

The Zamoyos and other streams are home to crocodiles and swarms of carnivorous fish capable of stripping a man's flesh in minutes. The continent swarms with stinging flies, venomous snakes, wasps and worms that lay their eggs beneath the skins of horses, hogs, and men alike. Basilisk Point is full of the eponymous animals, some of which are twice the size of lions.[7]

Sothoryos contains hairy apes in its jungles,[2] and the forests south of Yeen are said to be the home of apes that dwarf the largest giants, capable of killing elephants with a single blow.[7]

Farther south, in the Green Hell there are reports of white vampire bats that can drain the blood of a man in minutes, tattooed lizards that run down their preys and rip them apart with long curved claws on their hind legs, snakes fifty feet long, spotted spiders, and terrible wyverns.[7]

The origins of the city of Yeen are an enigma, though it is built of the same black stone as the idol in the Isle of Toads.[7][5]

The Old Empire of Ghis established outposts on the northern shores of the continent, raising the walled city of Zamettar at the mouth of the Zamoyos and the grim penal colony of Gorosh on Wyvern Point.[7]

The Valyrian Freehold established three colonies on Basilisk Point. The first was destroyed by Brindled Men, the second was lost to plague, and the third was abandoned when the dragonlords took Zamettar during the Fourth Ghiscari War.[7] Jaenara Belaerys flew her dragon Terrax farther south than any person ever and found only jungle, deserts, and mountains. After three years she returned to the Freehold to report the continent was as large as Essos.[7]

During their migration, the Rhoynar settled on Sothoryos, mainly on Zamettar, which was found deserted, established towns on Basilisk Point and even settled on the ruins of Yeen. However, weather, disease, parasites, and predators took their toll on them. Two towns on Basilisk Point were raided, their populations carried off in chains or put to the sword whilst those in Yeen had to face attacks from "brindled ghouls" from the jungle's depths. The Rhoynar struggled to survive for more than a year, until a boat sent from Zamettar to Yeen found that all of its inhabitants - men, women, and children - had vanished overnight. Afterward the Rhoynar abandoned Sothoryos entirely.[9]

After Lady Meredith was damaged by a leviathan, Ser Eustace Hightower sailed for the Summer Isles but landed on Sothoryos. His crew dwindled from disease and unexplained vanishings, but Eustace eventually hired a new crew of Summer Islanders and sailed for Tall Trees Town.[10]

Brindle-skinned half-men from the jungles of Sothoryos are among those who come to Meereen to battle in Daznak's Pit.[8]

Victarion Greyjoy divides the Iron Fleet into three squadrons during their journey to Slaver's Bay. Ralf Stonehouse leads the fastest ships on the corsair's road off the northern coast of Sothoryos. Only nine of Red Ralf's ships rejoin Victarion at the Isle of Cedars, with Ralf himself among the missing.[1]

In the books the continent is named "Sothoros" and "Sothoryos". In The Lands of Ice and Fire and the correspondence of George R. R. Martin with fans the version "Sothoryos" is used.[12]