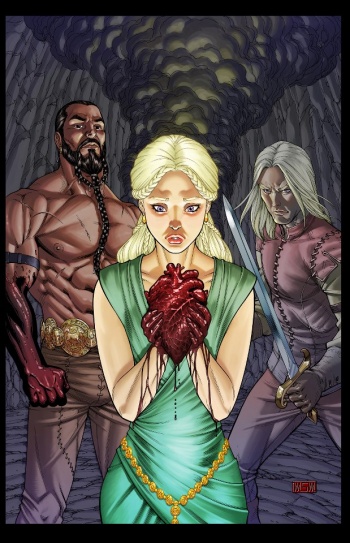 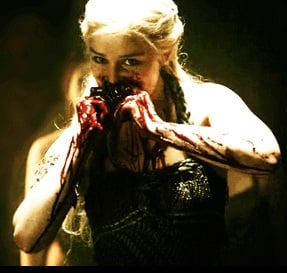 It is believed by the Dothraki that consumption the raw heart of a stallion during pregnancy will make a Khal's son strong, swift and fearless - but only if the mother can eat the entire heart. If the mother chokes on the blood or retches up the flesh, the omens are less favorable; the child might be stillborn, or come forth weak, deformed, or female. When Daenerys Targaryen is pregnant with her son Rhaego she takes part in this ceremony. Her stallion heart ceremony takes place in the evening, in a chalk pit ringed by torches in the sacred Dothraki city of Vaes Dothrak. She manages to consume the entire stallion heart.[1]

Since steel is not permitted within the sacred confounds of Vaes Dothrak, beneath the Shadow of the Mother of Mountains, Khal Drogo and his bloodriders kill the wild stallion using stone knives.[1]

The heart is steaming as Drogo sets it in front of Daenerys Targaryen. The heart is tough and stringy. However, Daenerys had prepared herself for the ceremony by dining on bowls of half clotted blood to accustom herself to the taste, despite her tender mother's stomach, and starved herself for a day and a night before the ceremony, hoping that the hunger would help her keep down the raw meat.[1]

The taste still threatens to gag her, and because the heart is all muscle, she has to worry it with her teeth a long time each mouthful. Although her stomach roils and heaves, she continues.[1]

After she has finished the entire heart, Daenerys turns to the old women of the dosh khaleen, and proclaims in her best Dothraki "Khalakka dothrae mr’anha!", meaning "A prince rides inside me!". The oldest of the crones, raises her arms on high and shrieks "Khalakka dothrae!", meaning "The prince is riding!" The other women answer "He is riding", proclaiming "Rakh! Rakh! Rakh haj!" ("A boy, a boy, a strong boy."). The oldest of the crones then delivers the prophecy that Daenerys Targaryen's son will be the Stallion Who Mounts the World.[1]

Afterwards Khal Drogo leads her from the chalk pit and the procession rides to the Womb of the World where Daenerys cleanses herself in its waters.[1]