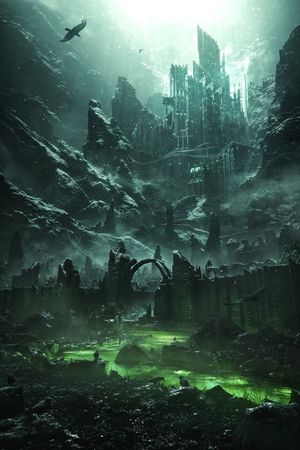 Stygai, also known as the City of the Night, is a ruined city in the mountainous Shadow Lands of eastern Essos.

The city lies on the Ash[1] in the Vale of Shadows, a river valley northeast of Asshai.[2]

Stygai is said to be a haunted corpse city. Twisted creatures, such as demons and dragons, are said to live in its vicinity, and even shadowbinders fear it.[1] Little is known of Stygai, bar that its byname comes from the fact it only sees the light of the sun for a brief period of time each day, around noon.[3]

The name "Stygai" may be a nod to "Stygia" from the story “Shadows in the Moonlight” by Robert E. Howard. In an essay in his Dreamsongs anthology Martin cites reading Howard's story as a formative experience in his (Martin's) development as a reader of fantasy. Martin quotes to a passage referring to Stygia "with its shadow-guarded tombs."