Summerhall is a ruined castle in the stormlands. Formerly a lightly fortified castle used by House Targaryen as a summer castle and royal residence, it was destroyed in a great fire in 259 AC. While the heir apparent to the Iron Throne was known as the Prince of Dragonstone, a younger son could be titled the Prince of Summerhall.[1]

Located in or near the foothills of the Red Mountains, the ruins of Summerhall are close to the stormlands' border with the Reach, east of the Cockleswhent and southeast of the Blueburn. The Boneway runs south from Summerhall through the Dornish Marches to Yronwood in Dorne.[2]

Summerhall was built in the Dornish Marches during the notably pro-Dornish reign of King Daeron II. It was a Targaryen summer castle and royal residence used frequently by Daeron in his youth. As he grew older, he left King's Landing less frequently and Summerhall passed to his youngest son, Prince Maekar. The prince maintained a household there after the First Blackfyre Rebellion.[3] This was possible since Daeron's heir, Baelor, had Dragonstone, and Aerys and Rhaegel seldom left the court. Maester Melaquin served at Summerhall.[4] The holder of the castle became known as the Prince of Summerhall.[5]

After the tourney at Ashford Meadow, Maekar wanted his son, Prince Aegon, to return to Summerhall. Ser Duncan the Tall, a hedge knight, took Aegon as his squire, however.[6] Aegon had a dragon egg at Summerhall.[7] Maekar brooded at Summerhall after his brother, King Aerys I Targaryen, named Brynden Rivers the Hand of the King.[8] 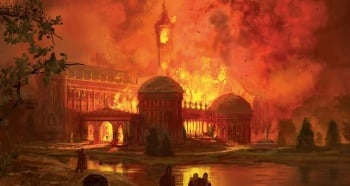 A great fire broke out in the castle in 259 AC, which was a serious blow to House Targaryen. The fire left the castle ruined and resulted in the deaths of King Aegon V Targaryen, his eldest son and heir, Prince Duncan the Small, and the Lord Commander of the Kingsguard, Ser Duncan the Tall.[9][10] It is sometimes blamed on one of the many Targaryen attempts to bring dragons back by hatching ancient dragon eggs. Archmaester Gyldayn was the last maester to serve at Summerhall.[11]

Prince Rhaegar Targaryen was born at Summerhall[12] on the day of the tragedy.[13] The crown prince grew up with a complex fascination for the ruins. Here he was happiest, yet also saddened by the memory of the tragedy.[14] He liked to visit by himself and sleep in the ruined hall of Summerhall beneath the moon and the stars. Maester Aemon thought Rhaegar's birth was associated with the prince that was promised, but Rhaegar later thought the legend was associated with his own son, Aegon.[13]

Upon the outbreak of Robert's Rebellion, the lords of the stormlands varied in their allegiance to their king, Aerys II Targaryen, and their lord, Robert Baratheon. The loyalist Lords Fell, Cafferen, and Grandison planned to join their strength at Summerhall and march on Storm's End. Robert was informed of their march, however, and defeated the three armies in succession in three battles at Summerhall before they could coordinate.[15]

Tyrion Lannister expects that when Doran Martell comes to King's Landing, he will take the Boneway from Dorne to Summerhall, and then head east to the kingsroad.[16] Tyrion is later surprised when Oberyn Martell arrives instead of Doran.[17]

At High Heart, the dwarf woman tells Arya Stark that she experienced grief at Summerhall.[18]

In Meereen Ser Barristan Selmy recalls that the children of King Aegon V Targaryen wed for love. Treason and turmoil followed, ending at Summerhall in sorcery, fire, and grief.[19]

And yet Summerhall was the place the prince loved best.[14]

I gorged on grief at Summerhall, I need none of yours.[21]

—The ghost of High Heart to Arya Stark