From A Wiki of Ice and Fire
(Redirected from The Doom)
Jump to: navigation, search 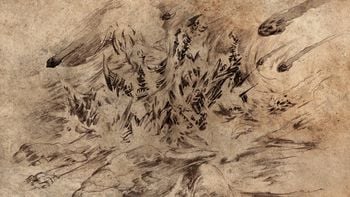 Doom of Valyria, from Game of Thrones Blu-ray

The Doom of Valyria, often called the Doom,[1][2] was a cataclysm of an unspecified nature that caused the collapse of the Valyrian Freehold, which had prospered for five thousand years. It occurred about a century before Aegon's Conquest of Westeros, in 102 BC. Spells, knowledge, and recorded history were lost in the Doom, and the Century of Blood followed the disaster.

Twelve years before the Doom, Lord Aenar Targaryen's maiden daughter, Daenys the Dreamer, had a powerful prophetic dream along with visions that Valyria would be destroyed.[3] Foreseeing the Doom, she convinced her father to leave Valyria before the cataclysm. Aenar set sail, moving House Targaryen and their property and their five dragons to the island Dragonstone.[4] Other Houses of the narrow sea of Valyrian descent include the Velaryons of Driftmark and the Celtigars of Claw Isle.[4] 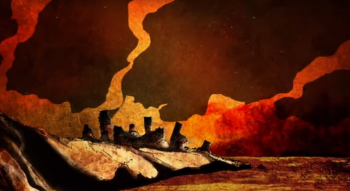 The Doom, from Game of Thrones Blu-ray

On the day of the Doom, every hill for five hundred miles exploded, filling the air with ash and smoke and fire, which killed even dragons. Earthquakes destroyed palaces, temples, and towns, while lakes boiled or turned to acid. The Fourteen Flames, the fiery mountains of Valyria, sent molten rock a thousand feet into the air, and red clouds rained down dragonglass. The cataclysm fragmented the Valyrian peninsula surrounding Valyria into numerous smaller islands and creating the Smoking Sea between them.[5] East of Valyria, Velos and Ghozai on the Isle of Cedars were destroyed by a tsunami.[6]

It is commonly believed that the Doom was a natural calamity caused by the eruption of the Fourteen Flames, although some septons believe the polytheistic Valyrians delved too deep to the seven hells. Alternatively, Septon Barth and some maesters believe that Valyrian spells controlling the Fourteen Flames faltered. Other explanations include the curse of Garin the Great, the fire of R'hllor, or infighting dragonlords assassinating fire mages.[3]

Much of Essos fell into chaos after the Doom. During the Century of Blood, the Volantenes unsuccessfully considered themselves the heirs to Valyria, often waging war against other Free Cities.[7] The Dothraki conquered many of the lands surrounding the Dothraki sea,[8] and the last Ibbenese king was thrown down.[9] The Slaver Cities of Slaver's Bay regained their independence.[10]

Some dragonlords in Lys and Tyrosh survived the Doom, but they were soon killed along with their dragons.[3] The dragonlord Aurion declared himself Emperor of Valyria and led a host from Qohor toward Valyria, but he and his followers were not seen again.[3] Tommen II Lannister, King of the Rock, vanished while sailing to Valyria with his blade, Brightroar, and Gerion Lannister later disappeared while searching for Brightroar.[11] It is thus said that no one has returned from a journey to the ruins of Valyria, and even the most hardened sailors shudder at the thought of sailing to ruined Valyria.[12]

Many of Valyria's secrets, such as magic,[13] the method for creating Valyrian steel,[11] and ancient records[14] were lost in the Doom. The disaster is represented in art across the known world.[15] Songs are sung of the Doom.[16]

In 54 AC during the reign of King Jaehaerys I Targaryen, Princess Aerea Targaryen disappeared from Dragonstone with the dragon Balerion.[17] Balerion returned to King's Landing in 56 AC with a dying Aerea. Septon Barth, who helped treat her, believed that Balerion had taken Aerea to Valyria, its birthplace. Because of her bizarre and horrific death and the powerful dragon's mysterious wounds, Jaehaerys made traveling to Valyria punishable by execution, and prohibited ships that had visited the area from docking in Westeros.[18] 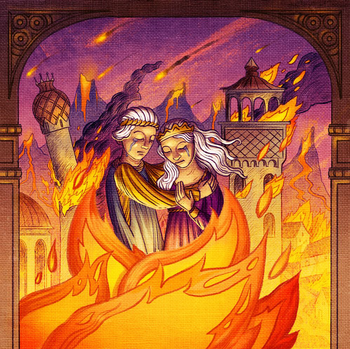 As she walks into the entry hall of Drogo's manse in Pentos, Daenerys Targaryen notices a mosaic of colored glass depicting the Doom of Valyria.[15]

At the wedding feast of King Joffrey I Baratheon, Collio Quaynis sings a haunting High Valyrian ballad of two lovers dying amidst the Doom.[16]

Euron Greyjoy claims to have reaved all over the world during his exile, including a trip to the feared ruins of Valyria. During the kingsmoot on Old Wyk, he claims to have found his dragon horn among the smoking ruins that were Valyria, where no man has dared to walk but him.[19]

In Meereen, the merchant prince Xaro Xhoan Daxos gifts Daenerys a tapestry that has been in his family vaults since before the Doom that took Valyria. The old tapestry depicts the Valyrian peninsula before its destruction.[20]

When the Selaesori Qhoran sails east near the coast of Valyria, Tyrion Lannister sees a dull red glow lighting the sky.[5]

Ralf the Limper's squadron of Iron Fleet ships are driven near blighted Valyria by storms while sailing to Slaver's Bay.[6]

Valyria is accursed, all men agree, and even the boldest sailor steers well clear of its smoking bones...but we would be mistaken to believe that nothing lives there now. The things we found in Aerea Targaryen live there now, I would submit...along with such other horrors as we cannot begin to imagine.[18]

Valar morghulis was how they said it in Valyria of old. All men must die. And the Doom came and proved it true.[21]

Every man there knew that the Doom still ruled Valyria. The very sea there boiled and smoked, and the land was overrun with demons. It was said that any sailor who so much as glimpsed the fiery mountains of Valyria rising above the waves would soon die a dreadful death, yet the Crow's Eye had been there, and returned.[12]

The proudest city in all the world was gone in an instant, its fabled empire vanished in a day, the Lands of the Long Summer scorched and drowned and blighted.[5]

Storms. Three big storms, and foul winds between. Red winds out of Valyria that smelled of ash and brimstone, and black winds that drove us toward that blighted shore. This voyage was cursed from the first.[6]

—Ralf the Limper to Victarion Greyjoy

George R. R. Martin's inspirations for the Doom include the legend of Atlantis and the fall of Rome,[22] as well as the Pink and White Terraces.[23]