The Wolf and the Lion

"The Wolf and the Lion" is the fifth episode of the HBO medieval fantasy television series Game of Thrones, first aired on May 15, 2011. Runtime is 55 minutes. It was written by the show creators and executive producers David Benioff and D. B. Weiss, and directed by Brian Kirk.[1]

The plot centers in King's Landing and Lord Eddard Stark's investigations regarding the death of the previous Hand. In the city, the Tourney of the Hand comes to an end while the various factions that plot for power come to light. This delicate balance is undone when news arrives that Tyrion Lannister has been arrested by Catelyn Tully. The title of the episode refers to the fact that the Starks, whose sigil is a wolf, may soon be at war with the Lannisters, whose sigil is the lion.

With this episode the season hits its halfway mark and the action picks up considerably. Despite being a topic of discussion at King's Landing, Daenerys Targaryen and Ser Jorah do not themselves appear in this episode. Jon Snow and all characters on the Wall are also absent, and Robb Stark does not appear in Winterfell scenes. As such, Emilia Clarke, Iain Glen, Harry Lloyd, Richard Madden and Kit Harington all have their names omitted from the opening credits but the Eyrie appears on the opening credit map.

Lady Catelyn Stark (Michelle Fairley) leads her entourage east through the Mountains of the Moon to get to the Vale, with Tyrion Lannister (Peter Dinklage) as her prisoner. However, they are soon attacked by barbarian tribesmen. During the fight, Tyrion saves Catelyn's life, attacking and killing a barbarian with a shield. Catelyn and her entourage arrive at the Eyrie, ruled by Lord Jon Arryn's widow, Lysa (Kate Dickie), Catelyn's sister, but when she finally meets her sister after five years, Lysa is mentally unstable and frightened of the Lannisters' power. Catelyn also meets her nephew, Robin Arryn (Lino Facioli), the heir to the Eyrie - an eight-year-old boy whom Lysa still nurses. Tyrion is consigned to the Eyrie's dungeon, the "sky cells" which opens to a sheer drop down a mountainside, whilst Lysa prepares to render judgment on him as an accomplice for her husband's murder.

At Winterfell, Theon Greyjoy (Alfie Allen) grows more jealous of Tyrion when his favorite prostitute Ros (Esmé Bianco), taunts him that she prefers Tyrion as he is a better lover and his family is richer compared to Theon due his position in the Stark household. Bran (Isaac Hempstead-Wright) is depressed over his paralysis and the fact that his mother left him while he was in a coma. To cheer him up, Maester Luwin (Donald Sumpter) decides to teach Bran the Dothraki art of horseback archery.

After Eddard Stark (Sean Bean) convinces King Robert (Mark Addy) not to join the Tourney, the crowd watches a jousting match between Ser Gregor Clegane and Ser Loras Tyrell, "The Knight of Flowers", which the latter wins with a trick (he knew Clegane's horse was a stallion and thus chose a mare that was in heat to ride himself, making Gregor's horse unable to run straight). Gregor doesn't take his loss well and beheads his horse and attempts to kill Loras. Sandor "The Hound" Clegane comes to Loras's rescue and defends him against his brother until Robert orders them to stop. Grateful for rescuing him, Loras calls Sandor a hero where he is cheered by the crowd.

Later, Ned converses with Varys (Conleth Hill), who reveals Jon Arryn was killed for asking questions and died by a poison called the "Tears of Lys" and suggests that Lord Arryn's former squire, the recently-slain Ser Hugh of the Vale, was the poisoner. Meanwhile, Arya Stark (Maisie Williams) continues her training by chasing a cat through the Red Keep, and stumbles upon a secret conversation between Varys and Magister Illyrio (Roger Allam) who are plotting to throw the Seven Kingdoms into chaos to allow the Dothraki to invade. However the sudden news that Daenerys Targaryen is pregnant might force them to speed up their plans. Illyrio suggests killing the new Hand might give them some time. Arya tries to warn her father, but is unable to identify the two plotters and fumbles her words. They are interrupted by the arrival of Yoren (Francis Magee), who informs Ned of his wife's abduction of Tyrion.

The news of Daenerys' pregnancy reaches the Small Council, delivered by Varys's spy, Ser Jorah Mormont. Fearing a possible invasion by the Targaryen/Dothraki alliance, Robert orders that she and her unborn child be killed. Ned refuses to obey such an dishonorable order and resigns the office of Hand of the King, but is deterred from leaving the capital by Littlefinger's offer to take him to the last person Jon Arryn spoke to before his death. It turns out to be a prostitute named Mhaegan, the mother a baby daughter who is another of Robert's illegitimate children. Littlefinger reveals Jon Arryn had been searching for Robert's bastards for an unknown reason. When Ned and his guards try to leave, they are ambushed by Jaime Lannister (Nikolaj Coster-Waldau) and his men, who want answers for Tyrion's arrest. Ned claims responsibility from his wife's actions and states he ordered for Tyrion's arrest which leads to a brutal fight between his and Jaime's men. In the end, all of Ned's guards are killed including his captain Jory Cassel (Jamie Sives), and Ned is stabbed through the leg by a spear. Jaime decides to let Ned live but warns that he wants his brother back, then storms away, leaving Ned bleeding in the dirt.

"The Wolf and the Lion" was written by the show creators and executive producers David Benioff and D. B. Weiss, based on the book by George R. R. Martin. The episode includes chapters 30 to 35 of the book (Eddard VII, Tyrion IV, Arya III, Eddard VIII, Catelyn VI, and Eddard IX).

The adaptation to the screen has continued with the trend of including new scenes to flesh out characters that in the book are only superficially seen through the point of view characters. These include the dialectical confrontation between Littlefinger and Varys, and the conversation between King Robert and Queen Cersei Lannister, and the young lovers Renly and Loras. The show's writers used this opportunity to make explicit Loras and Renly's ongoing assignations, which were only hinted at in the books.[2]

Finn Jones makes his first appearance as Ser Loras Tyrell, the young jouster known as "The Knight of Flowers". The casting was one of the first to be announced, being confirmed by author George R. R. Martin on June 2010 after it had been leaked before the contract was to be signed.[3] The actor had initially been considered for the role of Jon Snow when the pilot was being filmed.[4]

The new location of the Vale and its court is also introduced: Scottish actress Kate Dickie was cast as the Lady of the Eyrie, Lysa Arryn, also making its first appearance in the episode. Although Dickie does not resemble the physical description of Lysa given in the books, Martin stated that her acting in the auditions was excellent. The role of her son (renamed Robin in the series to avoid confusion with King Robert) went to Lino Facioli, and the knight of the Vale Ser Vardis Egen was played by Brendan McCormack.[5]

Lingerie model Emily Diamond has a role as a whore who teases Jory Cassel during the visit to the brothel. Diamond was initially hired as a body double to one of the main stars, but the producers liked her so much that decided to give her a role.[6] Also appearing in this episode is the casting team's member Robert Sterne, who reprises his cameo role as one of the members of the City Watch. 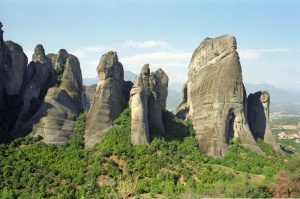 Images of Meteora were used for the composite views of the Vale.

The interiors for the episode were filmed at The Paint Hall studio. The conclusion of the Tourney of the Hand that had began in the previous episode continued to be filmed in Shane's Castle.

To film many King's Landing exteriors the production moved to Malta: the dungeons of the Red Keep where Aryas is lost while chasing cats were the dungeons of Fort St Angelo, in the Maltese town of Vittoriosa,[7] and the fight outside Littlefinger's brothel was staged at the Mesquita Square in Mdina.

For the CGI compositions of the Vale of Arryn, as seen in the establishing shot of the Eyrie and from the sky cells, the visual effects team used images and textures from the Greek rock formations of Meteora. Initially they had been considering the Zhangjiajie Mountains in China, but due to the fact that the landscape base plates were being shot in Ireland, using Meteora resulted a better option.[8]

As the action takes off, the episode shows more fight scenes, and "The Wolf and the Lion" has a large number that had to be choreographed. Fight co-ordinator Buster Reeves designed all the moves and then taught the cast how to make them and give a sense of real aggression. Reeves commented on the ambush of the Hill men as one of the most difficult as he had to show many people fighting on screen at the same time making every one look original and exciting, and also noting how intimidating it could be for the actors to have 20 stuntmen running through them with axes and swords.[9]

The episode's ratings in its premiere airing raised to 2.580 million viewers,[10] continuing the increasing trend of the last weeks. Combined with its encore, the show was up to 3.3 million viewers for the night.[11]

"The Wolf and the Lion" was met with highly positive reception by the critics of the show, and many regarded it as the best one yet. Maureen Ryan of AOL TV gave it a 90 out of 100, noting the exceptional work by the cast and an excellent writing.[12] Both Todd VanDerWerff and David Sims, from the A.V. Club, rated the episode with an A score.[13][14]

Reviewers agreed that after four episodes presenting the setting and introducing the main characters, the story started to move forward faster and raise the stakes. David Sims considered it "the point at which all of the scheming and conversing and table-setting began to lumber forward and gain some real momentum".[14] James Poniewozik wrote for Time that the episode began to let the swords do the talking", and "while there were some very significant scenes of talk, the dialogue went beyond Westeros History 101 to take the story in some very interesting directions."[15]

Maureen Ryan believed that one of the reasons the episode worked so well because it left out the storylines with the Night's Watch and the Dothraki and focused in a single location.[16] VanDerWerff agreed with her and added that with each episode the writers got bolder in the sense that they added new scenes not included in the book that round up the source material.[13]

Other aspects of the show that were highlighted by the critics were the effectiveness of the action scenes and the visuals (especially the views of the Eyrie and its sky cells, and the look of the dragon skulls).

The episode is dedicated "to the memory of Caroline Lois Benoist". Benoist was an animal trainer that had been working for the production for six months, mainly training the dogs that doubled as the series direwolves. 26-year-old Benoist fell ill on 18th December 2010, a few days after returning home after filming of the production had finished, and died on 29th December from swine flu.[17]