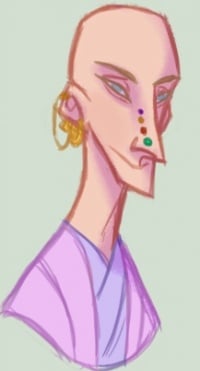 The Thirteen are a prominent group of merchant princes within Qarth. They fight for dominion over the city with the Tourmaline Brotherhood, the Ancient Guild of Spicers, and the Pureborn. There are thirteen members, including Xaro Xhoan Daxos,[1] and they own roughly a thousand ships.[2] The port of Qarth contains long stone quays for the Thirteen.[2]

After Daenerys Targaryen enters Qarth, Xaro Xhoan Daxos tells Pyat Pree that the Thirteen shall set a crown of black jade and fire opals upon her head.[3] When the Tourmaline Brotherhood gives Daenerys a crown, Daenerys rejects Xaro's suggestion to sell that crown in expectation of a grander one from the Thirteen.[1] Daenerys asks for ten ships from each of the Thirteen, but she is refused.[1]

Xaro's influence prevents the Thirteen from adding their voices to that of the other trade guilds demanding Daenerys's expulsion from Qath and possible assassination after the destruction of the House of the Undying.[2]

Xaro sails to Meereen with a fleet of thirteen galleys, and men to pull the oars, to gift to Daenerys so that she can sail home to Westeros. The queen believes Xaro convinced each of his fellow members of the Thirteen to give up one ship. When Daenerys refuses Xaro's advice to depart Mereen, the merchant leaves behind a bloodstained glove symbolizing war.[4]

Beware of Qartheen bearing gifts, especially merchants of the Thirteen.[4]

Thirteen is a bad number, Khaleesi.[4]